Here in the Northeast, schools are getting ready to reopen in what can only be called a gigantic experiment in the middle of pandemic with a virus we barely understand. I'm going to say a few more things about this soon... but I first want to discuss something that's been pushed to the back burner over the last few weeks.

The Senate's complete abdication to do anything serious about the economy might lead you to believe that Republicans don't believe that public schools are facing a fiscal crisis. But that's not entirely true. Even though the GOP school aid proposal is incredibly weak, the very fact that Republicans are proposing aid to schools is a tacit acknowledgement that they are in financial trouble.

But, as usual, Republicans are proposing an inadequate solution to a very real problem. Part of this inadequacy is due to the insistence of ideologues on privileging private schools when coming up with an aid package. Part of it is simply the lowball amounts the Republicans seem set on sticking with, contrary to estimates about what's needed.

But a big part is due to a fundamental misunderstanding -- likely, a  deliberate misunderstanding -- of how schools get their revenue. Schools rely heavily on their states for funding -- but the Republicans are refusing to provide fiscal relief for the states.

Let's start getting into this a bit more by charting out the flow of revenues to schools. 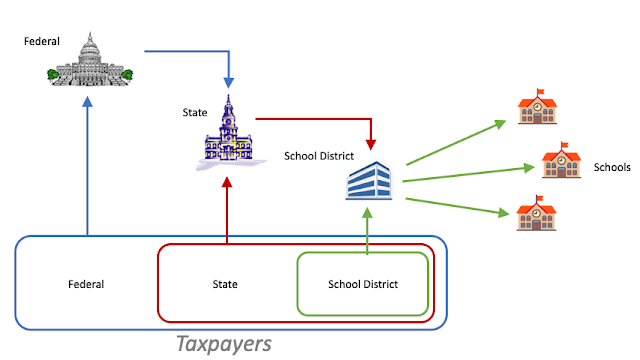 Let me point out something I think sometimes gets lost: the school district is the fundamental unit of school finance, not the school. How districts allocate finances to their schools can be important, especially in very large districts. But generally, districts are the ones who strike collective bargaining agreements, design and operate special education programs, allocate staff, receive revenues from higher levels of government, and so on.

There are three main sources of revenues for schools: the federal government, the states, and local schools districts. Most federal funding comes from the Title I program, designed to provide funds to higher-poverty schools, or the Individuals with Disabilities Education Act (IDEA). This funding does not, in general*, go directly to school districts; instead, it passes through states on to districts. The calculations for how these funds are to be distributed are complex, and states actually have some wiggle room to change how they allocate funds.

But while federal funding is important, especially for higher-poverty districts, it is not, in total, the largest part of funding for the K-12 system. 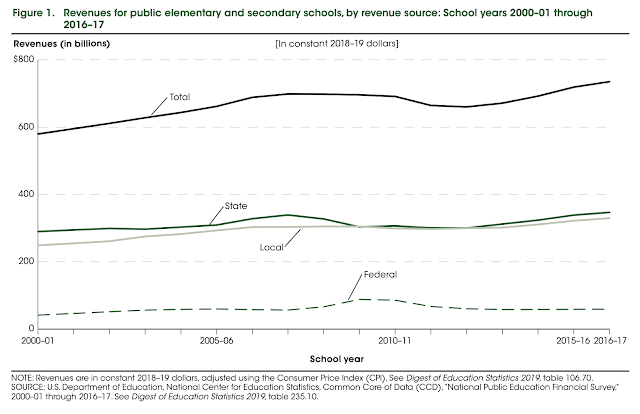 Historically, federal revenues accounted for between 7 to 13 percent of total K-12 funding over the past couple of decades. The percentage rose during the last recession due to the federal stimulus in 2009, but has gone down since.

The biggest sources of funding for K-12 schools have been state and local revenue. In the aggregate, each accounts for about half of the remainder after separating out federal funding. Of course, that varies considerably from state to state. 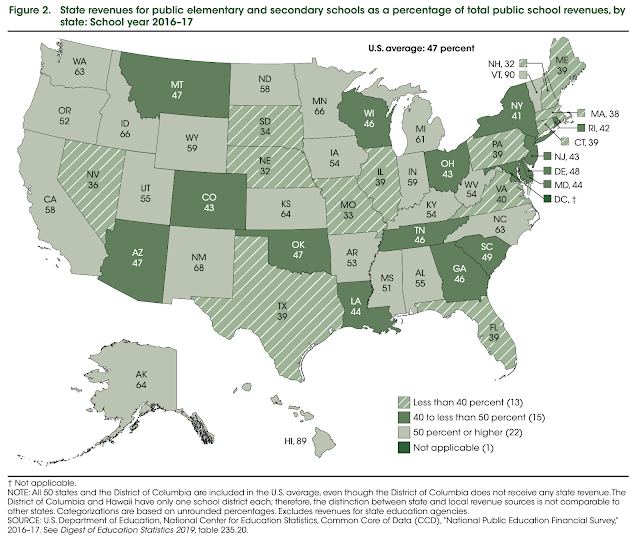 States like Vermont and Hawaii rely heavily of state funding (Hawaii only has one school district, though, so the distinction is largely meaningless). But even in the states where districts rely the least on state funding -- Missouri, Nebraska and New Hampshire -- state funding still counts for a third of revenues. In the majority of states, half or more of all revenues for schools come from the states themselves.

Funding schools is actually one of the primary fiscal activities of the states. 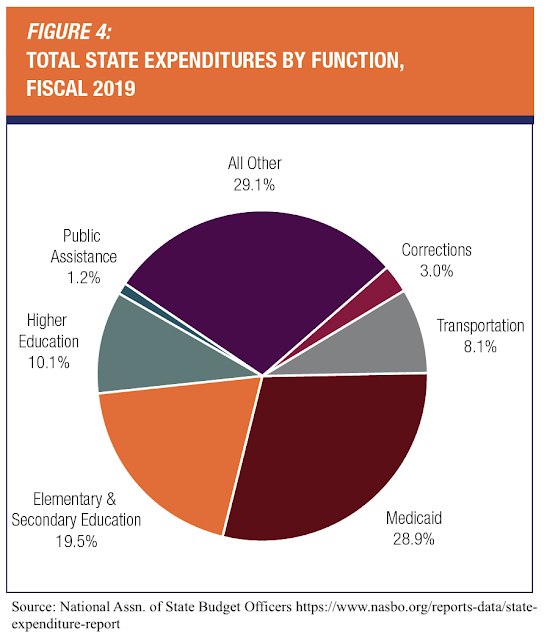 This pie chart is from the National Assn. of State Budget Officers latest report on state expenditures. Again, there's considerable variation from state to state, but on average elementary and secondary education takes up one-fifth of the states' budgets. Only Medicaid consumes more of the spending total.

States spent north of about $300 billion out of their general funds last year (estimated by NASBO) on K-12 schooling. It's an enormous amount of the total spending on schools. Given this reality, it's pointless to talk about school aid at the federal level unless you also talk about state aid. No one seriously believes the federal government could step in and provide direct aid to districts. Again, the vast majority of federal aid already flows through the states to districts; what possible benefit would there be to bypassing a system already in place?

* In fact, I'm unaware of any major federal government source of education aid that goes directly to school districts and bypasses states, exempting Department of Defense, tribal, or similar districts. If I'm wrong, let me know, I'd be curious to find out.