Living in Dialogue: Am I Too Darn Old – For What?

A colleague with whom I worked in facilitating PBL workshops several years ago recently posed a question that comes along for many of us as we move through the inevitable stages of our lives. Do I still have important things to offer other teachers now that I have been out of the classroom for a decade or more?

There is not one answer to this question, as so much depends on the work one continues to do, and how much that is needed and appreciated. So I am not going to tell anyone else what they ought to do. But I thought it might be helpful for me to share a bit of the struggle I have gone through since I left the classroom in 2004.

I began teaching back in 1987, when I was 29 years of age. It was challenging work, but I loved learning myself, and spent summers working at Lawrence Berkeley Labs, or on university research expeditions, seeking out new ideas and experiences I could share with my students. I took them on field trips to the ocean, and worked on the writing process with inspiration from the Bay Area Writing Project. I was in a teacher research group, and thought of my practice as an open-ended inquiry. I participated in the Exploratorium’s Inquiry Institute, and wrote my master’s thesis on challenging students to develop their own investigation questions. I was one of the first teachers in Oakland to achieve National Board certification back in 2000. And I led a district-wide project to support science teachers in sharing hands-on curriculum.

By 2004, after 18 years in the classroom, I was a bit worn out, and the test pressures of NCLB were setting in with a demoralizing effect. I transitioned to a coaching position in the District, and ended up heading up a project called TeamScience, which brought experienced science teachers together with beginners to serve as mentors.

During this time I began to develop as a teacher advocate. I worked with the Teacher Leader Network, and helped to write several reports on issues like teacher pay and evaluation. I was published in Teacher Magazine, and in 2008 started this blog. My work on the blog led to new forms of activism. I started a campaign to send letters to President Obama critical of the test-driven education policies  he was enacting. This then led to helping organize the 2011 Save Our Schools March in Washington, DC.

2011 was also the year I retired from Oakland Unified, and moved to a small town in Mendocino County.  My education activism continued – I worked with Diane Ravitch to launch the Network for Public Education in 2013, and continue to serve on the Board of Directors there. I had begun doing occasional Project Based Learning workshops, and that continued for about seven more years. At the outset my experience in Oakland served me well in this work. I was able to relate to the challenges teachers face in making their classrooms student centered and focused on meaningful projects with real inquiry.

But about four years ago I did a workshop at a middle school in Las Vegas that made me think twice. The three days began with the principal telling the staff of 45 teachers that their school of 1300 students had lost one of their four administrators due to budget cuts, and he still had to find another $125,000 to cut. They would have class sizes ranging from 35 to 40 students. And in Nevada, 30% of teacher evaluations are based on their students’ test scores. Here I was, trying to convince them to do month-long in-depth projects. When I saw their feedback, I was aware they were struggling, and part of the problem was how long it had been since I had faced the challenges they face – and how much more difficult this sort of teaching had become.

Around the time  I moved up to Mendocino County, I had developed an interest in building. With the help of a skilled builder, and some volunteer help from my sons and other friends and family, I built an octagonal cabin out in the woods. I hosted several gatherings of education activists there in the years that followed. When  I moved to a house surrounded by redwood and Douglas fir trees, I continued building – first a small wood shop, then a sauna, then two tree houses, each one bigger than the last. But the ever more present threat of forest fires led us to pull up stakes in 2018, and move north, up to a three acre home outside of Olympia, Washington.

One important shift was to begin to be less dependent on external affirmation for my sense of self. I really enjoyed the way that I was seen, and that sense of pride from those accomplishments fed my ego. But it was a continuous need, and it created the drive that had me writing many hours every week. As I reflected on that, I was able to see this drive and these accomplishments in a way less central to my core sense of self.

I try to be lots of things in this world, in relationship to my wife, my sons and sisters, and those I work with on various projects. I want to be there for them all, and I do want to do meaningful work, but it does not have to be so connected to recognition. So two years ago I started volunteering on a project building tiny homes in Olympia. After that project ended, I joined Habitat for Humanity two mornings a week, and helped build nine homes. Then, a year ago, we hosted a cider making party, and I met someone who taught me how to use the wood lathe that had been gathering dust in my shop since I had picked it up at an estate sale a few years ago. That led to my latest adventure, my little wood turning shop, where I sell bowls and other things I make on the lathe. I do enjoy the recognition that I get for that work, but much more than that, I love the process of working with wood, and thinking of creative ways to work within the limitations of the tools and material. The designs evolve, and I can experiment and learn, and when I share the results, the recognition from those that appreciate what I make is just kind of a bonus. 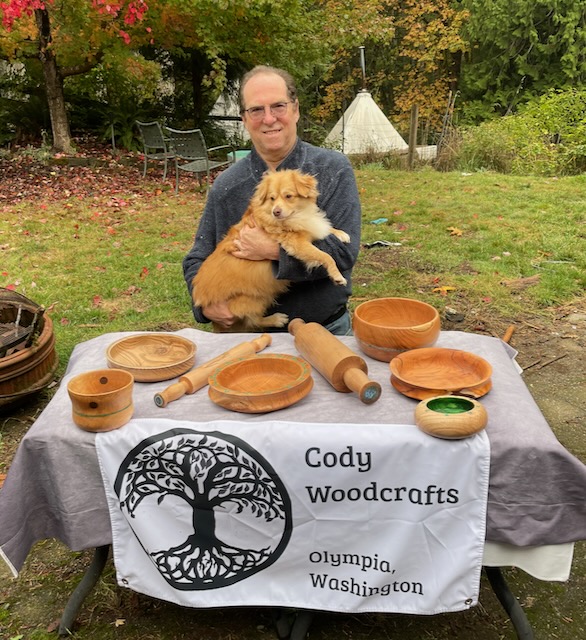 It is great to think of creative ways to extend one’s career as an educator, and I support anyone who wants to find ways to deepen and extend their work beyond the classroom. In my own journey, now that I have been out of the classroom for about as long as I was in, I have left that particular identity behind. It took a while for me to develop a new sense of myself, and there were some valleys, some times when I did not feel I had much to offer.

We always want our students to have open minds, to be curious and investigate. Investigating our selves and our path forward is not easy. It is worth reflecting on what we get from our work and our professional identity, and trying to hold it loosely. While we define ourselves by what we do, and what others recognize, appreciate and praise us for, that is not the core of our being. The core of our being can allow us to do many different things. We can bring our sense of care, curiosity and compassion to the world in different ways. If we can allow change to occur, we can discover ways to share our selves, as we find new skills and passions, beyond what we have done before.

Anthony worked for 24 years in the Oakland schools, 18 of them as a science teacher at a high-needs middle school. A National Board certified teacher, he now lead...
Author Profile
Quick Search
Sign up for NEPC Emails