Curmudgucation: AZ: It's More Than Money

I've been through two teacher strikes in my career, one as a rank and file member and one as a local union president. If you are not a teacher, here' a thing you need to understand about teacher strikes-- it's really hard to get teachers to walk off the job.

That's why I'm struck by the following data points from Arizona.

Number of public school teachers in Arizona: about 50,000. 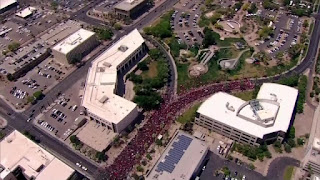 That is astonishing. Remember that teachers are a large and varied group with a lot of disagreement about politics (remember, 1/3 of NEA members voted for Donald Trump). How do you get such massive support for a walkout-- particularly in a right-to-work state where a work stoppage is illegal and the consequences are potentially grim?

Easy. You make the consequences of doing nothing even grimmer.

Arizona has been quietly but resolutely competing for the crown of Worst State for Education in the US, and they have made some real headway. In fact, the teacher walkout has already been going on for several years-- just one at a time. Teachers have been walking out all along; it's just that Thursday saw the trickle become a torrent. Arizona has a huge teacher shortage and while it periodically studies the problem, it refuses to learn anything useful from those studies. Meanwhile, they keep turning up sobering statistics like those from a study released in April of 2017:

* 42% of the teachers hired in 2013 left within three years.
* 74% of AZ superintendents report shortages of teachers
* When you adjust for cost of living, AZ elementary teachers are the lowest paid in the nation. High school teachers come in 48th.

But it's not just the pay (though the stories of teachers taking multiple jobs just to make ends meet are legion and troubling all on their own-- but there's more to it.

Arizona has followed the Florida model for privatization-- if you don't have enough demand for charter schools, then help create the demand by gutting public schools. It's disaster capitalism with a man-made disaster. And in this case, the leading men in disaster creating are the Koch bothers. As Derek Black notes:

At a policy conference in California in January, they announced plans to support a statewide referendum that could shovel even more taxpayer money into private schools. When they offered Gov. Ducey the podium, he was all in. "I didn't run for governor to play small ball. I think this is an important idea," he said. Next door, Nevada's state supreme court recently declared just this type of voucher idea unconstitutional because it put finding priorities for private education ahead of public education.

Arizona is determined to divert money away from public school and into charter business pockets, and that means making sure that charter operators are free to do as they please. Tracking the money tells a story of wild west style abuse, fraud and graft- but that's the Arizona way. Here's a whole website to browse the many charter abuses.

So Arizona's walkout (like the walkouts in Colorado and Kentucky and West Virginia) is not some old school "I'd like to make more money and get better benefits" strike. These are teachers who have finally realized that their pay and working conditions are not just being diminished, but are being diminished as part of a plan whose endgame is the complete dismantling of public education. And while this may be a red state phenomenon now, there's no reason to think blue states are immune-- after all, these walkouts also signal that teachers are awakening to the realization that there are few politicians (and no party) on the side of public education.

Meanwhile, the legislature includes guys like this asshat who thinks that teachers are just working multiple jobs for the perks like an extra car. And today (Friday) the legislature reportedly scooted out early because those darn teachers came back!