This is an ugly story, but it's typical of the way well-heeled "reformers" run their little anti-union education lobbying shops these days:

Regular readers here have followed the story of Janine Caffrey, former superintendent of Perth Amboy's (NJ) schools and the Queen of Tenure. Caffrey, in her very first year running a district, burst on to the NJ scene with some wild tales of malfeasance in Perth Amboy, which the Star-Ledger's op-ed editor, Tom Moran, happily reprinted to help make his case against tenure. Unfortunately, members of her own board disputed the details of these stories, and just generally didn't like the way she was running things and drawing attention to herself. So they voted her out; that didn't sit well with reformy Education Commissioner Chris Cerf, who overturned the board's decision and reinstated her.

But not before Perth Amboy, and all of New Jersey, saw this: 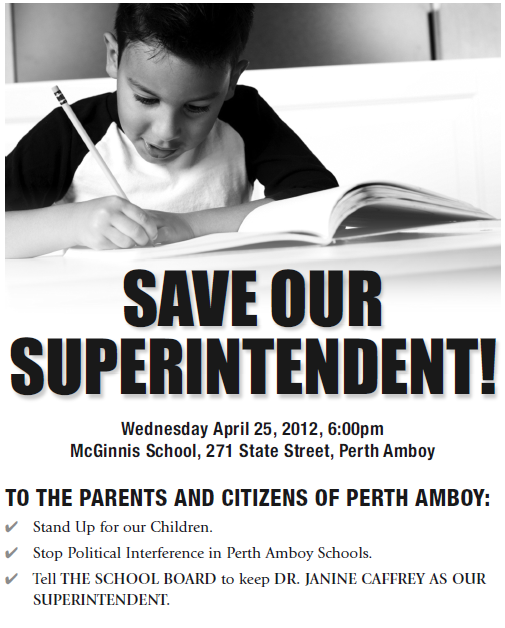 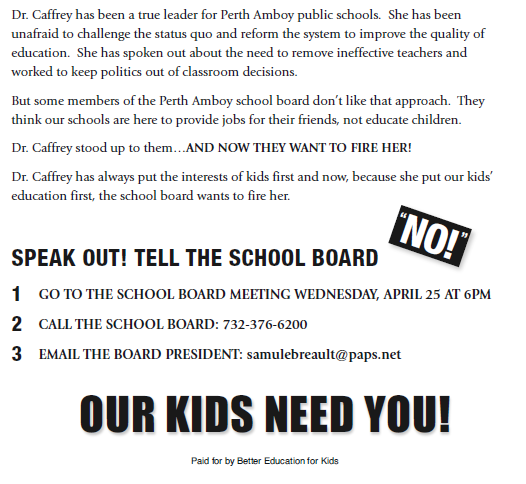 This is one of the ads taken out in a public relations campaign to save Caffrey's job - a campaign paid for by the folks at B4K (Better Education For Kids), New Jersey's "partner" with Michelle Rhee's StudentsFirst and the reformiest lobbying shop in the state. It's clear that B4K had Caffrey's back because she was willing to take high-profile stands against tenure and say unkind things about teachers unions.

But yours truly seemed to be the only observer at the time who thought this was a problem: anything Perth Amboy was involved in that had a connection to B4K, StudentsFirst, or Commissioner Cerf would now be tainted by the appearance of a quid pro quo. In fact, one of Cerf's former underlings got a nice, fat contract with Perth Amboy - and the technology he was using had connections to a firm owned by Rupert Murdoch, who just happened to be a big supporter of StudentsFirst.

But this wasn't the only way B4K is connected to Perth Amboy: as I reported back in April, B4K's non-profit arm was dropping a big chunk of dough into the district for a literacy program:

The other tidbit from the agenda was a big gift from the fine, reformy folks at B4K:

10). Approval to accept a grant from the Better Education Institute in the amount of $580,500.00 for the purpose of improving reading achievement of elementary school students.

11). Approval to enter into an agreement with Rutgers University for the Project Read initiative at a cost not to exceed $558,000.00, funded through the Better Education Institute grant.

A nearly $600K in a gift to Perth Amboy for a reading program; pretty impressive. I've been trying to find out more, but if Rutgers has publicized this, I haven't found it.

So that was actually good news, right? B4K might be gunning for teachers unions and teacher workplace protections, but at least they care enough about kids to actually put some money into literacy programs. I mean, it's not like this was some cynical attempt by B4K to back up Caffrey and make their contribution contingent on her continued employment...

(You know where this is going, don't you?)

Alas: even after one of B4K's hedge fund sugar daddies, Alan Fournier, got his fellow plutocrats to drop a ton of money into the Perth Amboy school race, the board decided that they'd had enough of Caffrey and told her they wouldn't renew her contract. And guess what B4K did with their contribution?

There was controversy over the funding for “Project Read.” Project Read is a program in conjunction with Rutgers University. The item stated that in the event that private foundation money becomes unavailable, the total amount paid to Rutgers (combined foundation and district funds) will not exceed the amount stated in the proposal. This item was tabled from the 8/29/13 Board Meeting.

Board Member Milady Tejeda stated that the program ran for 2 months. Board Member Obi Gonzalez along with Board Member Dianne Roman recommended that the Board Attorney clear up the reason why funding was taken away for this project. “I want it to be a clear contract and done correctly,” stated Gonzalez.

Board Secretary/Acting Superintendent Jess suggested that the Board untable the contract.

Board President Mark Carvajal proposed to propel the funding thru October. “We must be careful not to set a precedence.”

The item was untabled. Board Member Obi Gonzalez stated, “We are going to amend the Project Read to the end of November.

So it sounds like many in Perth Amboy think this project is actually a good investment - so much so that they are willing to look at paying for it for themselves. But it looks like even some of the board members aren't sure why the money for Project Read - money that was supposed to come from B4K - was taken away. Why is B4K pulling out of its commitment to help Perth Amboy's deserving children learn to read?

Well, you can actually go back and watch that 8/29/13 board meeting yourself. And if you go to about 1:38:45 on the tape, you can hear Dr. Caffrey, in her own words, explain why has B4K decided to renege on their promises to help Perth Amboy's kids:

OBDULIA GONZALEZ (Board Member): Yeah, I have a question. When we approved Project Read, it was totally funded through a grant by Rutgers, yes?

CAFFREY: Correct.[sic] No, it was a grant from the private foundation.

GONZALEZ: OK. At this point, have they withdrawn their monies?

CAFFREY: They are saying they will likely withdraw their monies. They are concerned about the stability in the leadership in the district. They are aware that the district is engaging in a search for a new superintendent, and they are aware that the board tabled two initiatives in the third and final years back in June, and that has given them pause. And so they are concerned about entering a new project without the stability in the leadership and the commitment of the board to see initiatives through to their completion. Ms. Roman, if you want to affirm any of that, I know you spoke with them.

DIANNE ROMAN (Board Member): Yes, thank you Dr. Caffrey. I did reach out to the contact person, over at the foundation, and one of the things that - this is close to a $500,000 grant. They've paid about $46,000 for work that was done with our teaching staff over the summer. So that's just about $46,000. The remainder - this was through an effort that was put together by the superintendent. She put together a plan in order to effectly address some reading deficiencies within the district.

They're concerned that if the board chooses to not renew the contract... they don't want to go ahead and give us additional funding if we are not going to have the person who initiated the program.Now I've spoken to them, I did assure here - and I only spoke on behalf of myself - that this board is committed to making sure that... we're committed to the learning opportunities for our students, and providing our teaching staff support so that they can be better in the classroom that they serve our scholars.

But they did have some concerns and she did share that at this time they cannot commit any more of those dollars that were set for the district.

And there you go: B4K is withdrawing their money from a literacy project in Perth Amboy that has already started because they don't like the fact that the anti-tenure superintendent they supported in a public relations campaign has been dismissed.

This really is about as cynical as it gets.The kids still need the program; the program hasn't changed; the training for the teachers already took place this past summer. But B4K doesn't like what the elected school board has done to Janine Caffrey, so they're breaking their commitment to the students and staff of Perth Amboy. Because, you know, they're so much more noble than teachers...

I wish I could say this is unprecedented, but we all know by now the story of Mark Zuckerberg's grant to Newark and how it was contingent on his preferred leaders staying in their jobs. Doesn't matter what the people who actually live in these cities think: as long as you dump enough "charity" into a district, you get to have a say - sorry, the say - in who will run it. And if you don't like how it's going, you get to take your ball and go home in a huff.

Hey, I've got a crazy idea: instead of relying on grants from plutocrats to fund worthy education programs, how about we just tax these people at pre-Reagan rates in the first place?Without all the capital gains tax breaks and goodies the tax code gives these wealthy, reformy folks? Then we'd have enough money to fund education without all the strings attached.

David Tepper - the other money man behind B4K - compares his salary to a NJ teacher's.

ADDING: Wouldn't it be nice if a little public shaming got B4K to reverse themselves and do the right thing? Tell you what, guys: I will take down this post and congratulate you instead - no snark, no nothing, just a hearty "well done" - if you do the right thing for Perth Amboy's kids and meet your commitments.

What do you say?