A popular meme in the wake of even more mass shootings makes a powerful, if somewhat hyperbolic, point: 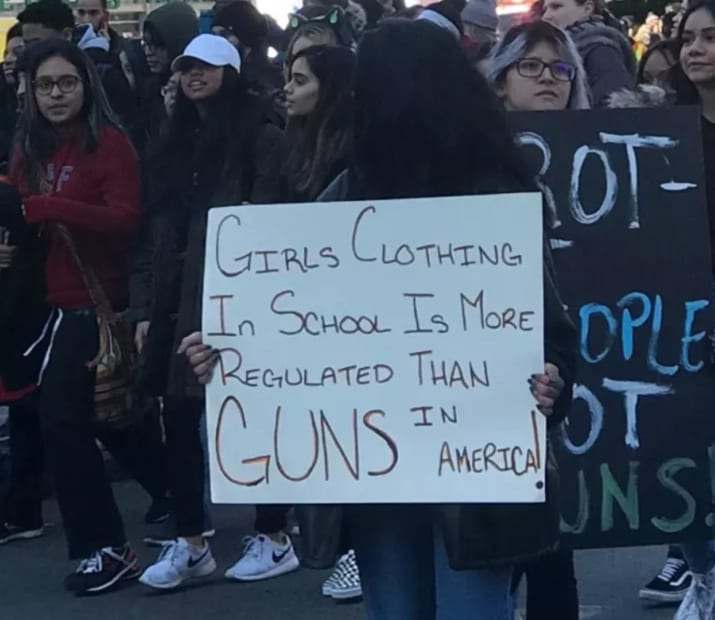 With most formal schooling restarting now, the dramatic consequences of gun violence is more likely to overshadow the more subtle negative and disproportionate impact of dress codes, especially on girls and young women as well as black and brown students.

When I raise the topic of dress code early in my foundations of education course, where students are required to tutor in a nearby school once a week, the young women invariably respond in ways that confirms what research has shown about the gender inequity of dress codes and how they are applied.

An early-career high school teacher and I were discussing her school and the new year starting with a different principal; she noted that principal is taking a different approach to the school’s dress code, specifically focusing on applying the existing code uniformly and more strictly.

She is concerned about the strictness, knowing that dress codes and their implementation tend to target girls more harshly than boys and perpetuate slut-shaming culture as well as placing the burden of “proper attire” on those girls instead of addressing toxic masculinity and sexism among the boy students. However, the consistency, she thinks, will be welcomed and much better for the students and the teachers.

Her next comment was important for me since she plans to ask the principal to re-examine the dress code next year, stressing that administrators and teachers need to explore the purposes of that dress code as well as the details (including the gender inequity likely in the current code).

This discussion spurred in me a more nuanced way to think of dress codes in the context of both the #MeToo movement and the rise of pronoun preferences and greater gender sensitivity in, especially, formal schooling.

I have always been skeptical of and resistant to dress codes in schools or in the workplace. I find the broad message about clothing to be superficial. But I also have rejected school dress codes because of their sexism and racism, and how they perpetuate blaming girls/women for boys/men being sexist and abusive.

Now, I want to consider if dress codes can be created and designed to work for equity by, as the teacher above suggests, first having administrators, teachers, and students clearly defining the purposes of the dress code, keeping in mind elements of equity and not simply the traditional focus of dress codes on discipline and compliance.

Next, writing a dress code that is gender neutral is an essential step that is also a valuable exercise for administrators, faculty, and students.

While searching to see if gender neutral dress codes exist, I found this from Roanoke County Schools in Virginia and this from Gender Inclusive Schools.

A final element in transforming from traditional dress codes that perpetuate inequity to equitable dress codes must include maintaining data and evidence on how the code is implemented as well as who is impacted by the implementation.

Equity and community not only can be but also must be a part of the codes that govern public institutions; formal education that claims to be in the service of freedom and democracy cannot achieve those goals when the codes and rules work against that freedom and shared ideology.

Breaking the gender codes of dress codes is more than rejecting them if we can agree to create new ones that recognize the humanity, dignity, and autonomy of all students, teachers, and administrators.

In the U.S., Where the Female Nipple Is More Dangerous Than a Gun