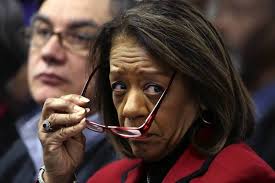 Barbara Byrd-Bennett has promised that no school closed this year will be handed over to a charter. -- Chicago Tribune (April 23, 2013)

When Byrd-Bennett was first pushing her plan to close hundreds of public schools, she promised angry parents and community groups that she wouldn't allow any of the newly-closed schools to become charter schools. But as we noted at the time, she was only playing verbal sleight-of-hand. When the charter operators cringed, BBB winked at them, whispering, Don't worrry. There will be plenty of money and opportunities for you. The Trib editorial board even called it, "A promise worth breaking."

Yes, we understand that the political heat on closings is intense and that many parents are furious that neighborhood schools close while charters expand and thrive. The vow not to open a charter in a shuttered elementary school was intended to defuse suspicion that this is just an exercise designed to promote charters over traditional schools

Even while some 30,000 students, most in African-American communities,were being targeted for ejection from their so-called "underutilized" schools, and even while neighborhood schools were facing draconian budget cuts,  the plans were already being laid to open dozens of new privately-run, non-union schools, Most of the new charters will open on the northwest and southwest sides, but many will be put in the very same neighborhood as closed schools.

As Chicago Public Schools officials finish shuttering a record number of schools and leave many neighborhood schools to open their doors in two weeks with diminished budgets, the district has quietly issued a call for new charter schools.

In a 52-page PDF posted without fanfare on the district’s website, CPS is asking for new charter operators and campuses for the 2014-15 and 2015-16 school years mainly — but not only — in 11 so-called “priority communities” on the Northwest and Southwest Sides where district-run schools have been complaining of overcrowding.

For those of you who miss the distinction between handing closed schools over to charter operators and opening new charters around the corner --- so do I.