Jersey Jazzman: Cerf's Up in Newark, and That Means More of the Same for its Schools

Gov. Chris Christie and state Education Commissioner David Hespe have announced the resignation of Cami Anderson as state-appointed superintendent of the Newark schools. She will be replaced by Christopher Cerf, the former state education commissioner.

Trenton, NJ – Commissioner of Education David Hespe today announced that Cami Anderson will be stepping down as State Superintendent of the Newark Public School District.

"Superintendent Anderson has worked tirelessly over the last four years to implement a bold educational vision for the students and parents of Newark," said Commissioner Hespe.  "Under Cami's leadership, the Newark school district signed a landmark teacher's contract, implemented One Newark, and increased flexibility and support in virtually every school in Newark.  We know that these positive educational reforms will continue to benefit the students and parents of Newark for years to come."

Superintendent Anderson will depart the district by July 8, 2015.  By July 8, 2015, Commissioner Hespe will recommend to the State Board of Education the appointment of Chris Cerf to the position of State Superintendent for the Newark Public Schools.  Mr. Cerf will be recommended for a three-year contract consistent with initial contracts in other state-operated districts including most recently Camden. [emphasis mine]

Yes, that's right: Chris Cerf, the former Acting Commissioner of Education for the entire state, won't just be an interim superintendent for the state-run district; he's going to be the permanent replacement.

And that means Newark's schools are likely in for several more years of reformy-style leadership.

The reformster line on Cami Anderson -- one often repeated by the Star-Ledger's Tom Moran -- is that she was a bad politician pushing great ideas. In their minds, Newark would have really loved Anderson's One Newark plan, if only she had been able to sell it better. People would have been fine with more charter schools that serve far fewer children with special education needs, and far fewer students in extreme economic disadvantage. They would have been thrilled to see black teachers fired, and stagnating test-based outcomes, and a chaotic transportation system... if only Anderson had been able to win them over with her charm.

This myth is, of course, rooted in the inherently racist view that people of color who live in cities with large economic challenges are incapable of running their own schools. 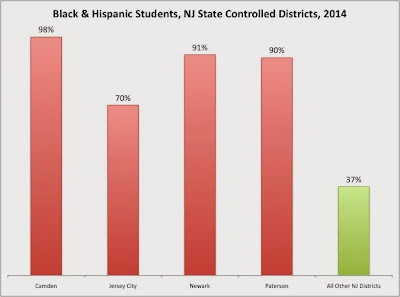 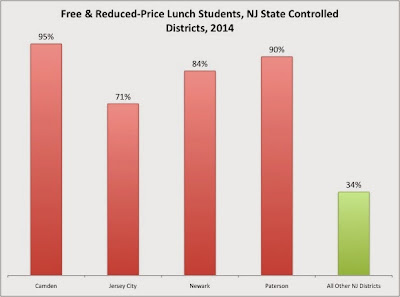 When Moran looks at Newark, he sees a bunch of "shrieking" folks who don't really know what's best for themselves. Anderson's failing, in his mind, is one of marketing, not policy; she just couldn't get through to those people (if you know what I mean...).

This is why the S-L is almost certain to run an editorial very soon lauding Cerf (Moran's neighbor in the very reformy town of Montclair) as the perfect pick to lead Newark's schools to new heights. Because he'll do exactly the same things Anderson is doing right now -- but he'll do it with a smile. He won't fly off the handle when people dare to mention his own kids. He'll show up to school board meetings and nod and take notes and promise to take everyone's views under advisement.

And then he'll go do exactly what Cami Anderson was doing before. Why wouldn't he? Just as recently as this past December, Cerf was singing Anderson's praises, even as he was demonizing those who stood against her.

And let's not forget that Cerf himself was instrumental in laying the groundwork for One Newark, Anderson's failed school reconstitution plan.

Oh, sure, he tried to deny it, even as the evidence piled up. But the fact remains that back in 2011 Cerf's old firm, Global Education Advisors, came up with the initial plan* to close many of Newark's neighborhood public schools and replace them with charters, using the rationale that low test scores justified the actions. As Bruce Baker rightly noted, this was an incredible bit of "hack junk" analysis: the report never bothered to look at whether differences in student characteristics played any role in the schools' relative performance.

It's also worth noting this same destructive idiocy was at play in Cerf's policies later, when he ran the entire state's education system. But this is how Cerf was trained. His (and Anderson's) time at the NYCDOE under Joel Klein, coupled with his involvement in the Broad Superintendent's Academy Book Club, formed his "creative disruption" mindset: use test scores to justify closing public schools and let privately governed charters take over. And if that's not feasible, reconstitute the schools, generating as much instability as is possible.

This is precisely what has happened to Newark's schools under Anderson. Even though there is no evidence that Newark's charter schools are more effective or efficient, they have been given the green light to take an increasingly large share of the market. The district itself has been complicit in painting a false picture of the extent of their "success"; the district has also abetted their expansion as part of its One Newark plan, likely leading to even greater segregation within the district.

Of course, the charters don't want to take all of the kids; that would mean educating the most costly and challenging students, something they have no interest in doing. So there will always be some district schools; Anderson, however, has "disrupted" the public system, leading to outcomes that look to be worse than what they were before she implemented her policies.

Yes, Anderson has a tin ear and is really awful at the politics of running a large urban district. But more than that: her policies are failures. What she has done in Newark has made things worse, which is why nearly all the stakeholders want to get rid of her.

And there is no doubt these same policies will be championed by Chris Cerf once he takes over.

Remember that both Cerf and Anderson were directly appointed by Chris Christie, a man who has beat up on schools to hide his own many failings. Under Christie, New Jersey's commitment to adequate school funding has steadily eroded, even as he has done nothing to address the crushing childhood poverty rates of New Jersey's cities.

The chaos Anderson created in Newark, and that Cerf created across the state, was invaluable for Christie: it allowed him to continue to defund New Jersey's schools even as he shifted the debate to things like teacher contracts with merit pay, and charter schools, and testing. Reformsters could pretend that these were the critical issues in education policy, blithely ignoring segregation, poverty, and inadequate school funding, the real reasons for New Jersey's opportunity gap.

So let's be very clear about what's really happening: if Chris Christie gave a damn about Newark's schools, the last person he'd put in charge of leading them would be Chris Cerf. Instead, he'd appoint a real educator as the superintendent, after gaining the consent of the school board. He'd find someone with a proven record of success in remaking urban public districts. He'd put someone with actual, relevant education and experience in place and give them what they needed to truly rehabilitate Newark's schools.

Instead, Chris Christie is trading in one disruptive force for another -- one with a more placid demeanor, but just as pernicious.

Watch your back, Newark: even as he's smiling, you'll never know what Chris Cerf might have in his hand.... 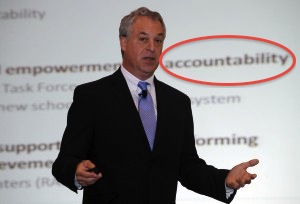 "This is a knife fight in a dark room."

ADDING: Newark, THIS is who is going to run your schools. God bless you.

ADDING MORE: Would someone please explain to me how Peter Greene writes about this stuff so well and so fast???

AND MORE: The New York Times is out of its damn mind:

She [Cami Anderson] resisted the push by Mr. Booker, a Democrat who is now the state’s junior senator, and Mr. Christie, a Republican, to expand charter schools, fearing aloud that they drained motivated families and money from traditional schools. But she also alienated many parents with her reorganization plan, known as One Newark, which replaced the city’s tradition of neighborhood schools with a universal enrollment system that assigned students by lottery to traditional as well as charter schools. It resulted in school closings, mass firings of teachers and principals, and more students in charter schools, which aggravated complaints that Ms. Anderson was catering to wealthy ideologues with misguided ideas about how to improve urban education. [emphasis mine]

Yes, she did fret about charters engaging in cream-skimming -- AFTER she set up One Newark, a universal enrollment system that way oversold the claim of charter "success." She only started blaming charter school proliferation for her own failures after she realized what a monster she had created.

The notion Anderson "resisted" charter expansion is utterly absurd; One Newark was all about letting charters run wild. Hat tip to Leonie Haimson for pointing out this ridiculous story.

* Hey Chris: great job getting behind Adelaide Sanford Charter School in that report! How'd that work out, buddy?