Peter Greene had a useful post the other day about how to spot bad education research. One sure sign is cherry-picking: focusing on a few observations – or even just one – and then suggesting these few are representative of the whole. This tactic is a favorite among charter school cheerleaders, who will extoll X's high test scores and Y's high special education rates – without mentioning X's special education rates and Y's test scores.

Earlier this month, the New Jersey Charter School Association (NJCSA) filed a motion to intervene in a lawsuit: Latino Action Network v. State of New Jersey. The lawsuit contends New Jersey has some of the most segregated public schools in the nation (it does), and proposes a series of remedies. One notable feature of the lawsuit is that it is critical of charter schools:

Because charter schools are thus required to give priority in enrollment to students who reside in their respective districts, and because they tend to be located predominantly in intensely segregated urban school districts, New Jersey’s charter schools exhibit a degree of intense racial and socioeconomic segregation comparable to or even worse than that of the most intensely segregated urban public schools. Indeed, 73% of the state’s 88 charter schools have less than 10% White students and 81.5% of charter school students attend schools characterized by extreme levels of segregation, mostly because almost all the students are Black and Latino. [emphasis mine]

As you can imagine, this didn't sit well with the NJCSA:

On Thursday, September 6, the New Jersey Charter Schools Association asked a state court judge for permission to intervene into the historic school desegregation case [Latino Action Network v. State of New Jersey] on behalf of its member schools. Charter schools are part of the desegregation solution—they are not the problem. In fact, an important tool to combat school segregation is empowering parents with meaningful public school choice. While we share the values and goals of diverse, high-performing schools that serve a broad range of students, we are intervening to address baseless attacks on charter schools and ensure that our students and families have a seat at the table. [emphasis mine]

Now that is a provocative claim: NJCSA is stating not just that New Jersey charters aren't making school segregation worse, they are actually contributing to the desegregation the state's schools. On what do they base this claim?

In the motion*, NJCSA references this data point to make their case:

Attached to the motion is a document found here, published by NJCSA. Here's the relevant factoid: 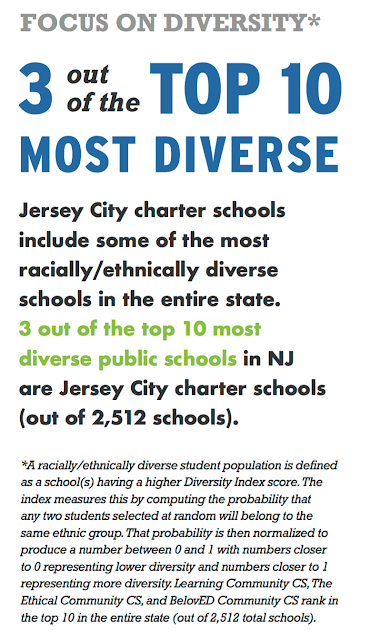 I checked the claim and it is, indeed, factually correct. It's also a brazen example of cherry-picking.

I'll go through all the data below.., but even if I didn't, it should be obvious that this is an absurdly narrow way to judge the entire New Jersey charter sector. Yes, three charter schools in Jersey City are diverse by this measure -- but what about the others? How can we assess the entire sector based on three schools from one city?

NJCSA is apparently using a measure known as Simpson's Diversity Index to calculate school-level racial diversity. I'll leave aside a discussion of whether this is the best measure available or not, and instead note that the SDIs that I calculated, using data from the NJ Department of Education, showed that these three charter schools did, in fact, rank as numbers 2, 9, and 10 in the state. This means that it is more likely, relative to the other schools in New Jersey, that if you selected two students from these schools they would be of different races.

The obvious question, however, is whether these schools are typical of the entire NJ charter sector. There are several way to approach this; I'm going to present three.

First, let's look at all NJ charters, keeping in mind that they vary in the size of their enrollments. Let's rank all NJ schools by their SDI, then divide them into 10 "bins," weighting those bins by student enrollments. How would charter schools be distributed? 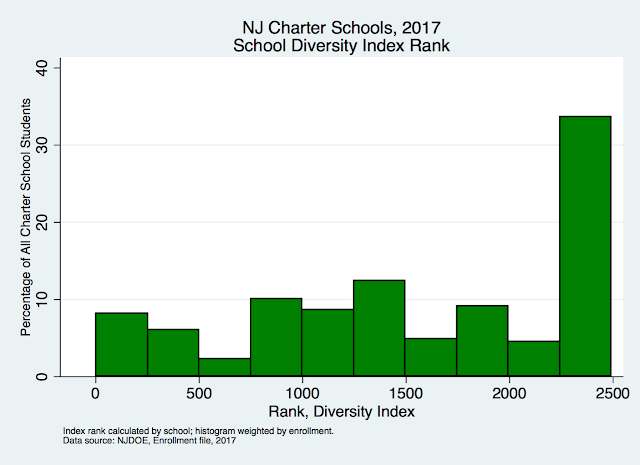 I am using rank here because NJCSA used it; however, there are (at least) two problems with this analysis. First, using rank can spread out measures that are clustered, making the distribution look more "flat" than it really is. Second, we can't see how charters compare with public district schools in diversity.

So here's a histogram that shows compares how charter students and public district students are distributed into schools of differing diversities: 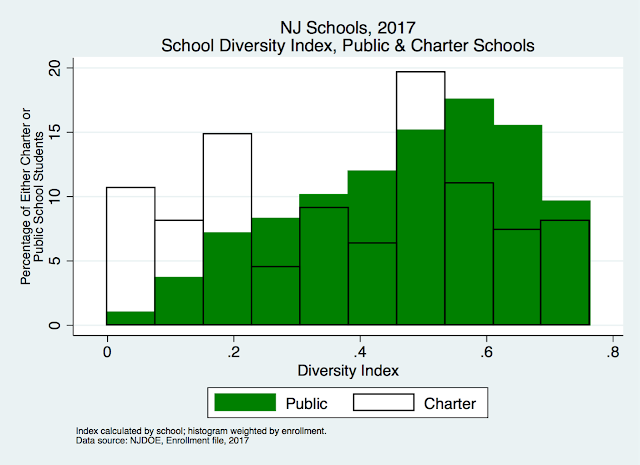 This takes a little explaining, so hang with me. The SDI in New Jersey varies from 0 (the least diverse school) to .76 (the most diverse school). I've divided all the students in New Jersey into 10 bins again; then I marked whether they were in charter or public schools. The green bars represent students in public district schools; the clear bars are the charter students. 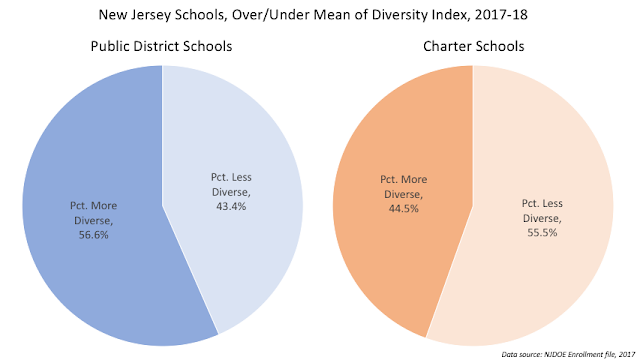 Look, I'll be the first to say the using Simpson's Diversity Index as a measure of school diversity has its limitations. But NJCSA chose the metric – and then they cherry-picked their results.

If you want a seat at the table when it comes to addressing the serious problems New Jersey has with school segregation, you should be prepared to contribute positively and meaningfully. Stuff like this doesn't help.

* I was sent the motion by one of the parties involved. Can't find a copy on the internet, though, including the NJCSA website. If someone can direct me to a link, I'll add it.