The Art of Teaching Science: The Common Core: The Good, The Bad & The Ugly

There was an article in Scientific American entitled Science in a Republican Senate: The Good, the Bad and the Ugly.  It is well worth a read, and I’ll be commenting more on the article in the days ahead.

But for this blog post, I want to apply the Good, the Bad, and the Ugly to an analysis of the Common Core State Standards (CCSS).

The Common Core State Standards initiative began in 2009 at a Chicago meeting held by the National Governors Association and the Council of Chief State School Officers. These groups charged Achieve, Inc. to develop and write common standards in mathematics and English/language arts. The purpose of a common set of  standards was to set up a consistent set of educational goals across the nation that would make sure that students graduate from high school and be ready for college and career. College and career readiness are underlying goals of the Common Core.

The Common Core is essentially Bad and Ugly, but it does have some Good aspects.  Please read on.

The Good: The Emergence of Voices in Opposition to the Common Core

The “Good” of the  Common Core and related educational reforms has created several grass-root organizations of teachers, parents, activists, students, professors, and others.  The Network for Public Education and United Opt Out National are two examples of how groups of citizens have come together and used their intelligence, creativity, and voice to call the Common Core a sham that should be opposed and removed from America’s public schools.

In addition to organizations that emerged from opposition to the Common Core, there has been a surge in the number of bloggers–mostly teachers, former teachers, professors–who write critical blog posts providing educators and parents with information, knowledge and editorial opinions about the Common Core.

In the research and reading that I do to write this blog, I’ve come to know a vanguard of voices who have created a movement to oppose a cabal of corporate pirates whose goal is to privatize public education, and mutate the teaching profession into nonprofessionals who have little experience and even shorter life expectancy as teachers.  Most of the people who I’ve identified as part of a larger vanguard of voices of opposition are doing courageous work, and writing about the injustices of the standards-based reform movement.  For example, I wrote this about one of these educators, Dr. Mercedes Schneider.

Dr Mercedes Schneider’s book, A Chronicle of Echoes: Who’s Who in the Implosion of American Public Education (Public Library) arrived the other day and I was thrilled to see the names and chapters devoted to many of those who I have written about on my blog. But you won’t find the kind of writing in Mercedes’s book about these people and organization anywhere else. In my view, Mercedes Schneider is at the vanguard of voices who are uncovering the harm that the people featured in her book are inflicting on public education. In amazing detail and wonderfully written you’ll be taken on journeys into the minds of corporate and education thieves, many of whom have become wealthy on the backs of American school students and teachers.

From the literature and research, a compelling vanguard of voices has emerged, and is ground zero for the real reform of America’s public schools.  You can read about some of these people here.

As you read ahead, I will introduce other leaders among the vanguard of voices in opposition to the standards-based educational reform.

The Bad: The Influence Peddlers and Market-Based Designs

In a powerful synthesis  linking corporations and organizations to the Common Core, all of whom are affiliated with the American Legislative Exchange Council (ALEC), Dr. Morna McDermott, Professor at Towson University and co-founder of United Opt Out National has used a systems approach to map these connections, and shows how this “neoliberal ecosystem” is reigning havoc on school districts around the nation.

In an article entitled Flow Chart Exposes Common Core’s Myriad Corporate Connections, the author (Candice Bernd) uses Dr. McDermott’s research to paint a nasty picture of the relationships among corporations and organizations and the Common Core.  Using the chart shown in Figure 1, which was created by Dr. McDermott, Bernd says this: 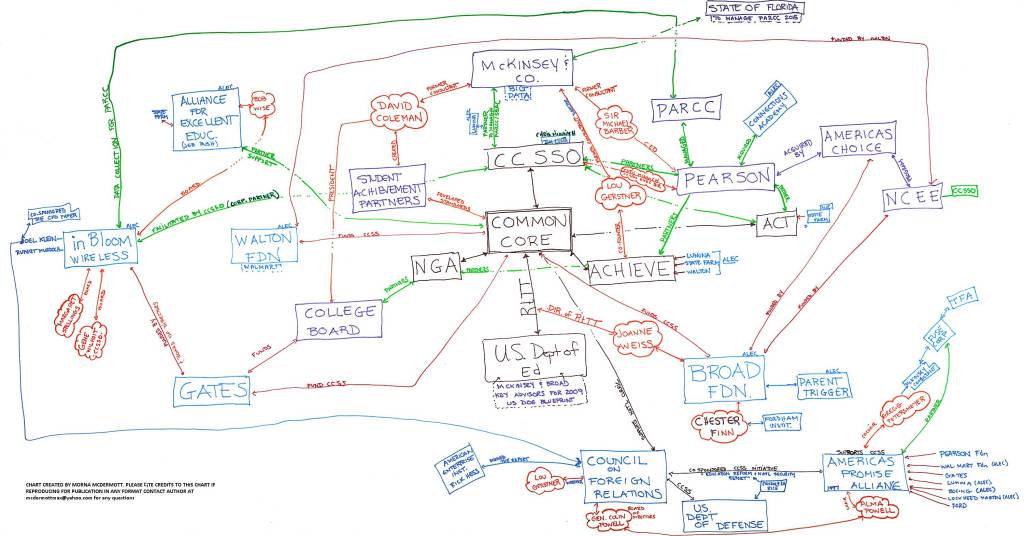 Figure 1. Map of the Common Core and its Connections to Corporate America. Used with permission of the author, Dr. Morna McDermott, United Opt Out National and Towson University

The map created by Dr. McDermott exposes the influence peddling that shadows and casts a pall over public education in America.  The Common Core State Standards has created an ecosystem of influence peddling involving private organizations, corporations, not-for-profit groups, governments and many technology-based education companies.  In a separate research project, Dr. Mercedes Schneider has identified and investigated a who’s who of the influence peddlers shown in the McDermott map.  Taken together, the McDermott and Schneider studies expose the corruption and greed that underscore what’s wrong with American public education.

McDermott documents this in a three-part article (UNESCO and the Education Technology Industry: A Recipe for Making Public Education a Profiteering Enterprise on her blog, Educationalchemy.   Here is how she begins her research paper.  She writes:

Without conjecture as to motive or intent, I parallel the last 30 years of reform which are intertwined with UNESCO and find some documented parallels and relationships. The conjecture is left to my reader. My findings here reflect what appear to be the three premises of the last few decades upon which global accountability driven reform are driven, posited by Heinz-Dieter Meyer, Daniel Tröhler, David F. Labaree & Ethan L. Hutt (Teachers College Record Volume 116 Number 9, 2014):

The Ugly: Betrayal of Civil Rights and the Right to a Quality Education

According to research by Nicholas Tampio and Yohuro Williams, the Common Core Betrays the Civil Rights Movement.  In a report published on Truthout, these researchers name several reasons why the Common Core is harming a generation of African-American students.  For several years we have published many articles on this blog that are supported by the claims of these researchers.

Firstly, they rightly state that the Common Core and its associated high-stakes testing has branded many students of color as failures.  If you look at high stakes testing data in any state, or focus on any city district, a very low percentage of black and hispanic students show skill on math tests.  Tampa and Williams report that only 19.3 percent of African-American students were proficient in math, and 17.6 percent were proficient in language arts.

A second concern that they find is the fact that public education has reduced curriculum to those areas that are tested; namely, math and language arts.  Students are unfairly punished if they don’t do well in either of these subjects.  And for students who don’t do well, the solution is to burden the students with worksheets in drill and practice regimes, and not providing opportunities for teachers to work with these students with out the fear of failing yet another test.  The result is, according to these researchers and many others, that students are turned into “little test taking machines.”

Thirdly, the resources that are available to schools are being used buy textbooks and high-stakes tests.  Billions of dollars will be needed to purchase and keep up a technology infrastructure to measure student performance on the Common Core.  As we have reported here, and as these researchers printout, The Race to the Top program used more than $330 million to fund two testing consortia (PARCC and SBAC) to develop computer-based tests.  Do schools have the funds to carry out a computer-based high-stakes testing program, and do they have the funds to keep up this system?  Could these resources be used in other ways that might help students learn, and not become robots who are taught to the test.

We have created an ugly situation when it comes to providing an education for youth that is interesting, creative, and innovative.  According to these researchers, and others that I’ve cited in this article, little is being done to offer an educational experience that sees students as unique people who bring to school a rich canopy of experiences that could be the basis for learning.  Williams and Tampio close their article by writing:

We share the National Urban League’s ambition to prepare black youth to succeed in the 21st century global economy but disagree that the Common Core is the way to make that happen. So far, the Common Core is draining educational budgets, narrowing the curriculum and turning students into little test-taking machines. This is no way to advance the civil rights legacy. Instead, we should recommit to the principle that all children, of whatever race or background, can attain the same kind of education only available, right now, to the children of privilege (Tampio, N., & Williams, Y. (2014, November 5). Common Core Betrays the Civil Rights Movement. Retrieved November 8, 2014, from http://www.truth-out.org/opinion/item/27250-common-core-betrays-the-civ…).

A quality education ought to be available to children from any family.  But it seems to me, and especially to scholars such as Ed Johnson, that we have done nothing but tinker with schooling under the disguise of the Common Core Standards reform.  The goal of schooling under the present reform conditions is to make the claim that students are proficient in math and reading by using a test-based metric.  Teaching to the test is the primary activity of school.

Using the current model of reform, schools can not be improved by trying to improve the parts separately.  It is a sure path to failure. For example, some advocates of educational reform believe that student achievement can be improved by weeding out the bad teachers. Millions of dollars have been invested in using student high-stakes test scores to check teacher performance using a technique called Value Added Measure (VAM). Teachers whose VAM scores are low can be identified, and according to these experts, teachers with low scores must be bad teachers. Getting rid of “defects” in any system will not improve the system or the part that was identified. Instead, a better investment would be to ask how can we improve the quality of teaching, and what can be done to improve the teaching of all educators.

The above example highlights the current approach to reform. Identify a part of the system, and fix it. Bad teachers, get rid of them. Low achievement scores? Write “rigorous” standards, raise the bar, and give high-stakes tests. It’s that simple. We’ve had rigorous and not so rigorous standards in place for more than a decade, and as you will see ahead, changing standards doesn’t have any effect on student performance.

Providing a quality education for all students means that all parts of a school system are interdependent and must be taken as a whole. For example, The Atlanta Public Schools (APS) is a system of connected and interdependent parts, and to improve the quality of the APS, it is critical to look at the APS as a whole. Closing schools (removing so-called underperforming schools), does not have an effect of improving the APS, or indeed saving money (as some would tell you). Fundamental questions about APS need to be asked, but in the context of the APS being a system, not a collection of schools, students, teachers, administrators, parents, curriculum, textbooks, technology.

But as Mr. Johnson has said in other letters and reports, if fundamental questions about the purpose of schooling are not addressed and if we can not agree on these purposes, very little will change in the system.

What do you think about the Common Core?