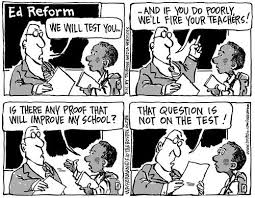 CCCS were supposed to prepare students for a global economy by equipping them with critical thinking skills. They were touted as a way to even the playing field so that class, race and gender wouldn't determine what and who were being taught (See Jean Anyon on Social Class and School Knowledge).

But it appears that the implementation of Common Core standards reflects and reproduces the growing divide and inequities between have and have-not states and school districts. Given the expensive and redundant testing regimen that comes with CCCS, it's the testing,  publishing and training companies that are benefiting, more than the poorest and neediest kids.

A new study finds that, "cuts or freezes in state funding … have negatively affected CCSS implementation activities in some states," with 20 states reporting K-12 funding deceases. Twelve of these states reported that these reductions led to scaling back Common Core efforts. States also reported that their education agencies are struggling with capacity."

Although many states have already begun teaching content based on the Common Core State Standards and preparing school staff to implement the strict educational standards, they are also struggling to come up with the funds to properly train their teachers, according to two reports from George Washington University's Center on Education Policy. -- U.S. News and World Report

The CEP is heavily funded by the Gates Foundation and as you might expect, the report is overall favorable to Common Core despite these apparent inequities in its implementation.

Only one-quarter of all states surveyed reported they had enough staff to support implementation, provide professional development and help school districts ease into the digital exams associated with Common Core. And 32 states indicated they're having trouble connecting the standards to a new wave of teacher and principal evaluations. "Funding levels in K-12 may be stabilizing, but most state education associations are under-resourced," [CEP Director Maria]Ferguson said.