What happened when teachers confronted a union-busting charter CEO at the National Charter Schools Conference in New Orleans? 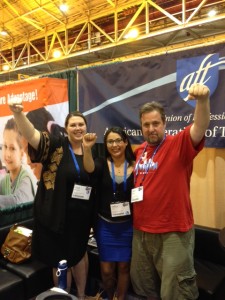 When is *disruption* not just a super cool buzz word but something that’s actually, well, *disruptive*? That would be when teachers attending the National Charter Schools Conference in New Orleans asked the CEO of an Ohio charter management organization about firing teachers for trying to organizing a union at his schools—and using taxpayer money to pay the fine when he got caught. This went about as well as you might expect. And when security arrived, combing through the crowd for disruptors, that’s when things got really disruptive…

Our story actually starts long before the bon temps starting roulez-ing at this year’s charter conference in the Big Easy. In 2014, teachers at two I CAN charter schools in Cleveland decided to unionize in hopes of improving working conditions at the school, raising pay and reducing sky-high turnover. And when the school year ended, seven teachers who were leaders of the organizing effort, found themselves no longer working at the schools. Why? Because they’d been fired by school leaders, who, according to a federal complaint filed by the teachers, *led teachers to believe they were under surveillance and pressured teachers into revealing who was leading the organizing effort.*

But wait—it gets better (for realz)

The feds sided with the teachers, finding that I CAN was guilty of *interfering with, restraining, and coercing employees.* The order, similar to an indictment in a criminal case, also accused I Can of *discriminating in regard to the hire or tenure or terms or conditions of employment, thereby discouraging membership in a labor organization.* I Can founders Marshall Emerson and Jason Stragand, meanwhile, acknowledged that they’d like their schools to remain union free, then paid the $69,000 in backpay they were ordered to pay the fired teachers with tax-payer money.

Which brings us up to the present, to yesterday, as a matter of fact, when charter school teacher and union member Karla Tobar, raised her hand during a session on Charter School Growth Strategies: Start-Up, Growth, and Expansion, and put to I CAN CEO Marshall Emerson this question: *You mentioned some best practices include building relationships with teachers, so how do you justify firing seven teachers for trying to form a union, and having to pay $69,000 for that?* At which point, other disruptors in the audience helpfully handed around $69,000 bills that explained the history of the case, the federal judgment and pointed out that I CAN had paid the fine with tax-payer funds.

Are you a disruptor? What about you?

A debate ensued, several more teachers weighed in, and eventually it was time to return to the matter at hand: Charter School Growth Strategies: Start-Up, Growth, and Expansion, including I CAN’s own plans to expand its network into Indiana. Oh, and then security arrived, and attempted to identify just who among the audience members was a disruptor, a task that is apparently much more difficult, not to mention time consuming, than it looks. No doubt you are wondering at this point, how can we keep this kind of disruption from happening again? And were the teachers involved actually engaged in a kind of *cage busting,*in which teachers bust out of their cages and *take ownership of their schools and systems*? Alas, I can only answer question one, thanks to this official document that was sent to conference presenters yesterday.

We’re reaching out to let you know that a small group of participants disrupted a session this morning that made it difficult for the presenters to share information with other attendees. While we seek to foster honest and productive dialogue throughout the conference, we are committed to making this a positive experience for both attendees and presenters.

In the event of a disruption, please: