Fiscal effort (or simply “effort”) is an important tool for evaluating states’ school finance systems. Effort tells you how much of a state’s capacity—how big a slice of its “economic pie”—is devoted to K-12 schools. Effort indicators help you determine whether states lag behind in spending because they have smaller economies from which to draw revenue, or because they have simply failed to devote a large enough share of their capacities to their public schools.

Effort can change over time due to changes in spending, capacity, or both. The trend in fiscal effort over the past 20 years, and particularly since the “Great Recession” of 2007-09, is among the most concerning results we have presented from the School Finance Indicators Database (with our collaborators Bruce Baker and Mark Weber).

The graph below presents U.S. average effort (unweighted) between 1997 and 2018. Effort is calculated very simply: we divide each state’s total spending (direct to K-12 education) by its total capacity. The latter can be measured in two different ways, each of which is represented by a different line in the graph: gross state product (the blue line) and aggregate personal income (the red line). These two denominators produce extremely similar trends. The estimates for all years exclude D.C., for which effort is not calculated, and Vermont, due to irregularities in that state’s spending data in 2018 (the state is excluded from all years to keep a consistent set of states across years). Finally, note that the y-axis in the graph starts at two percent, and so year-to-changes appear a bit larger than they would if the axis started at zero. 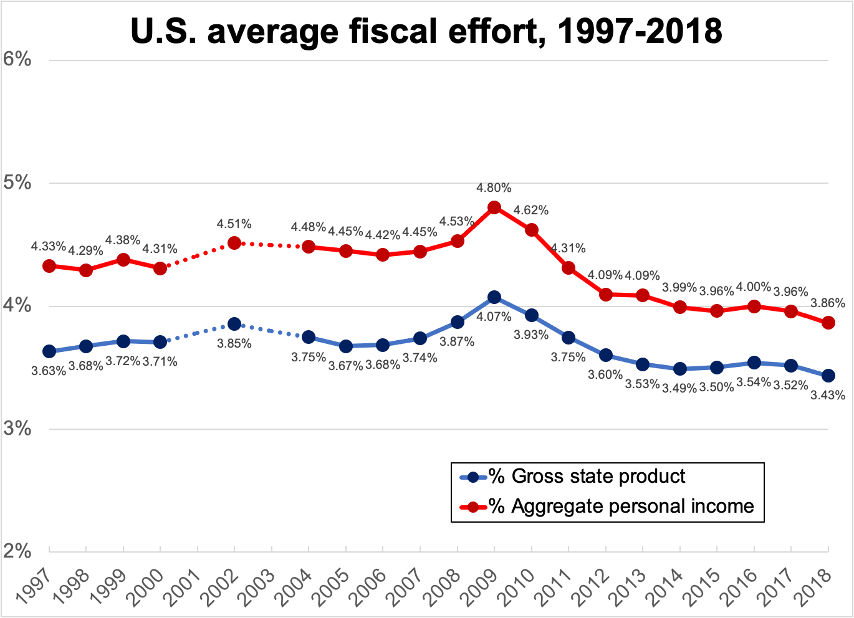 At first glance, what jumps out from the graph is the spike in average effort between 2007 and 2009, followed by a rapid decline. The coincidence of increasing effort with a massive recession may seem counterintuitive, but that’s because it is an illusion of sorts.

Recessions cause states’ economies to contract quickly, but it can take a little while for these effects to be reflected in spending on schools and other social services. So, between 2007 and 2009, states’ economies got smaller (the denominator of the effort “equation” decreased) but the decrease in spending (the numerator) was delayed. As a result, effort increased temporarily (you can see the same basic trend, though far less pronounced, coinciding with the recession in the early 2000s).

What happened starting in 2010 was disastrous in two respects. First, average effort declined rapidly for 3-4 years, bottoming out well below its pre-recession level. Second, it did not recover in subsequent years. In other words, as of now, the decline in fiscal effort appears permanent.

As usual, this aggregate trend masks a lot of underlying variation between states, but mostly just in degree. While the magnitude of changes varied, effort increased (net) between 2007 and 2009 in all but three states (North Dakota, Virginia, and West Virginia, which all saw small decreases). This was followed by a net decrease between 2009 and 2013 in every single state except Wyoming. Even as economies recovered, effort in the typical state remained at its new low point.

Consequently, effort levels in 2018 are lower than they were in 2007 in all but nine states. In a few states, the change is truly alarming. Most notably, Michigan’s effort level dropped 1.2 percentage points between 2007 and 2018, going from among the highest in the nation to among the lowest. In three other states—Florida, Hawaii, and Indiana—the net decrease is close to one percentage point.

Note that even small changes in effort represent many billions of dollars in education revenue. The denominators here are entire state economies.

This is important because effort matters. Less effort means fewer resources. Effort and per capita capacity together explain about 70-80 percent of interstate variation in adjusted state and local revenue. The persistent decline in fiscal effort helps explain (or reflects) why labor cost-adjusted spending was lower in 2017 than it was in 2009 in all but 12 states (Baker and Di Carlo 2021).

Now, it bears mentioning that states with larger economies can put forth less effort than states with smaller economies and still produce the same amount of resources. Four percent of New York’s economy is a lot more than four percent of Mississippi’s or Alabama’s. In addition, education costs vary between states—e.g., states that serve larger shares of lower-income students will have to spend more to provide a given level of educational quality. The key is for states to calibrate their effort levels with their needs and the size of their “economic pies.” Of particular concern are states where effort is high but capacity is low, as these states try to fund their schools but are more constrained in their ability to raise revenue (and federal funding might be targeted at these states).

But the Great Recession’s impact on state and local budgets was not calibration, it was deterioration. The recession was severe, and declines in revenue were inevitable. What is more disturbing about the trend above is its persistence. States’ economies recovered and grew, but most states failed to invest that growth in their schools. Policymakers in these states chose this course of action, and only they can reverse it.