For the Love of Learning: The Education Question We Should Be Asking (by Alfie Kohn)

This was written by Alfie Kohn who writes and speaks on parenting and education. Kohn tweets here and his website is here. This post was originally found here.

“While we’re at it, maybe we should just design classrooms without windows. And, hey, I’ll bet kids would really perform better if they spent their days in isolation.” My friend was reacting (facetiously, of course) to a new study that found kindergarteners scored better on a test of recall if their classroom’s walls were completely bare. A room filled with posters, maps, and the kids’ own art constituted a “distraction.”

The study, published last month in Psychological Science [1] and picked up by Science World Report, the Boston Globe, and other media outlets, looked at a whopping total of 24 children. A research assistant read to them about a topic such as plate tectonics or insects, then administered a paper-and-pencil test to see how many facts they remembered. On average, kids in the decorated rooms were “off task” 39 percent of the time and had a “learning score” of 42 percent. The respective numbers for those in the bare rooms were 28 percent and 55 percent.

Now if you regularly read education studies, you won’t be surprised to learn that the authors of this one never questioned, or even bothered to defend, the value of the science lessons they used — whether they were developmentally appropriate or presented effectively, whether they involved anything more than reading a list of facts or were likely to hold any interest for 5-year-olds. Nor did the researchers vouch for the quality of the assessment. Whatever raises kids’ scores (on any test, and of any material) was simply assumed to be a good thing, and anything that lowers scores is bad.

Hence the authors’ concern that children tend to be “distracted by the visual environment.” (Translation: They may attend to something in the room other than the facts an adult decided to transmit to them.) And hence my friend’s wry reductio ad absurdum response.

Alas, “sparse” classrooms had their own problems. There, we’re told, children “were more likely to be distracted by themselves or by peers.” Even if we strip everything off the walls, those pesky kids will still engage in instructionally useless behaviors like interacting with one another or thinking about things that interest them. The researchers referred to the latter (thinking) as being “distracted by themselves.” Mark that phrase as the latest illustration of the principle that, in the field of education, satire has become obsolete.

Our attention seems to be fixed relentlessly on the means by which to get students to accomplish something. We remain undistracted by anything to do with ends — what it is they’re supposed to accomplish, and whether it’s really valuable. Perhaps that’s why schools of education typically require “methods” classes but not goals classes. In the latter, students might be invited to read this study and ask whether a child could reasonably regard the lesson as a distraction (from her desire to think, talk, or look at a cool drawing on the wall). Other students might object on the grounds that it’s a teacher’s job to decide what students ought to do and to maximize their “time on task.” But such conversations — Time on what task? Why is it being taught? Who gets to decide? — are shut down before they begin when all we talk about (in ed. schools, in journals, in professional development sessions)is how to maximize time on whatever is assigned.[2]

Those of us who are disturbed, even outraged, by what’s being done to our schools in the name of “reform” — imposing ramped-up, uniform, prescriptive standards; high-stakes testing; and pressure that’s both vertical (with kindergartens now resembling really bad first-grade classrooms) and horizontal (with little time for music and the arts, recess, student-designed projects, or any subjects not being tested) — ought to consider how this agenda is quietly supported by research that relies on test scores as the primary, or even the sole, dependent variable.

Then, too, there’s the way such research is described by journalists. Most articles in Education Week, for example, ought to include this caveat:

Please keep in mind that phrases such as “effective policies,” “higher achievement,” “better results,” or “improved outcomes” refer only to scores on standardized tests. These tests are not only poor indicators of meaningful intellectual accomplishment but tend to measure the socioeconomic status of the students or the amount of time they have been trained in test-taking skills. 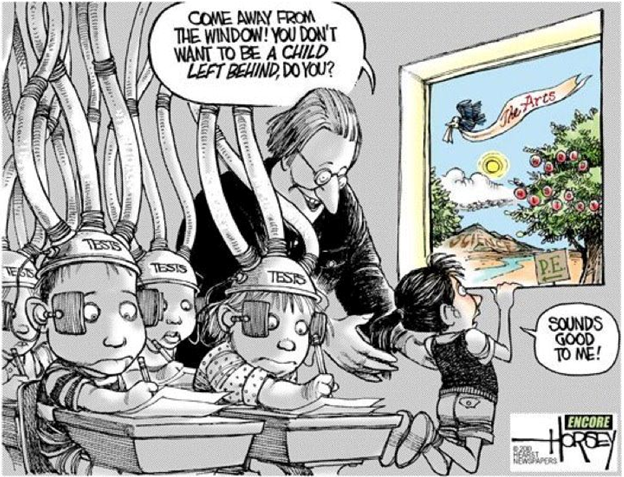 The idea that kindergarteners ought to block everything out but facts about plate tectonics reminded me of an essay called “Can Teachers Increase Students’ Self-Control?” (as usual, the question was “can,” not “should”) written by a cognitive psychologist named Daniel Willingham. He offered as a role model a hypothetical child who looks through his classroom window and sees “construction workers pour[ing] cement for a sidewalk” but “manages to ignore this interesting scene and focus on his work.”[3]

But what was the “work”? Was it a fill-in-the-blank waste-of-the-time that would lead any child to look out the window or at the wall? Or was it something so intellectually valuable that we’d be justified in saying, “Hey, this really is worth it”? I don’t know. But for Willingham, as for so many others, it apparently doesn’t matter: If the teacher assigned it, that’s reason enough to ignore the interesting real-life lesson in how a sidewalk is created, to refrain from asking the teacher why that lesson can’t be incorporated into the curriculum. An exemplary student is one who stifles his curiosity, exercises his self-control, and does what he’s told.

Is a given lesson worth teaching? I may not always be sure of the answer, but I’m pretty sure that’s the question we should be asking — rather than employing discipline, or demanding self-discipline, or pulling stuff off the walls in order that students will devote their attention to something whose value is simply taken for granted.

2. A couple of years ago I wrote an article called “Teaching Strategies That Work! (Just Don’t Ask ‘Work to Do What?‘)”, which focused on a research review challenging the effectiveness of discovery-based learning without ever asking what constitutes effectiveness. There, too, my point was that if we don’t ask what we’re looking for and argue about the values that underlie our answers, we’ll end up by default with a goal like higher test scores — or, in the case of classroom management strategies, compliance.

3. Daniel T. Willingham, “Can Teachers Increase Students’ Self-Control?” American Educator, Summer 2011, p. 23. I offered this example in my book The Myth of the Spoiled Child (Da Capo Press, 2014) and, in the same chapter, cited a pair of studies by Angela Duckworth and her colleagues that found an elite group of middle schoolers performed better in the National Spelling Bee if they were higher in grit, “whereas spellers higher in openness to experience — defined as preferring using their imagination, playing with ideas, and otherwise enjoying a complex mental life — perform[ed] worse.” The study also found that the most effective preparation strategy was “solitary deliberate practice activities” rather than, say, reading books. Thus, if enjoying a complex mental life (or reading for pleasure) interferes with performance in a one-shot contest to see who can spell more obscure words correctly — and if sufficient grittiness to spend time alone memorizing lists of words helps to achieve that goal — this is regarded as an argument in favor of grit. But of course the unasked question once again concerns ends rather than means: How important is it that kids who are exceptionally good spellers win more championships? Should we favor any strategy or personality feature that contributes to that objective (or to anything that could be described as “higher achievement”) regardless of what it involves and what it displaces?

Alfie Kohn writes and speaks widely on human behavior, education, and parenting. His 14 books include Punished By Rewards (1993), The Schools Our Children Deser...
Author Profile
Quick Search
Sign up for NEPC Emails