Yesterday, the National Education Policy Center published a lengthy report written by Dr. Bruce Baker and myself that looks closely at school "reform" in Newark. I wrote a short piece about our report at NJ Spotlight that gives summarizes our findings. We've also got a deep dive into the data for our report at the NJ Education Policy website.

You might be wondering why anyone outside of New Jersey, let alone Newark, should care about what we found. Let me give you a little background before I try to answer that question...

In 2010, Mark Zuckerberg, the CEO and founder of Facebook, went on the The Oprah Winfrey Show and announced that he was giving $100 million in a challenge grant toward the improvement of Newark's schools. Within the next couple of years, Newark had a new superintendent, Cami Anderson. Anderson attempted to implement a series of "reforms" that were supposed to improve student achievement within the city's entire publicly-financed school system.

In the time following the Zuckerberg donation, Newark has often been cited by "reformers" as a proof point. It has a large and growing charter school sector, it implemented a teacher contract with merit pay, it has a universal enrollment system, it "renewed" public district schools by churning school leadership, it implemented Common Core early (allegedly), and so on.

So when research was released this fall that purported to show that students had made "educationally meaningful improvements" in student outcomes, "reformers" both in and out of New Jersey saw it as a vindication. Charter schools are not only good -- they don't harm public schools, because they "do more with less." Disruption in urban schools is good, because the intractable bureaucracies in these districts needs to be shredded. Teachers unions are impeding student learning because we don't reward the best teachers and get rid of the worst...

And so on. If Newark's student outcomes have improved, it has to be because these and other received truths of the "reformers" must be true.

But what if the data -- including the research recently cited by Newark's "reformers" -- doesn't show Newark has improved? What if other factors account for charter school "successes"? What if the test score gains in the district, relative to other, similar districts, isn't unique, or educationally meaningful? What if all the "reforms" supposedly implemented in Newark weren't actually put into place? What if the chaos and strife that has dogged Newark's schools during this "reform" period hasn't been worth it?

What if Newark, NJ isn't an example of "reform" leading to success, but is instead a cautionary tale?

These are the questions we set out to tackle. And in the next series of posts here, I am going to lay out, in great detail, exactly what we found, and explain what the Newark "reform" experiment is actually telling us about the future of American education.

One other thing: as I have said before, the "reformers" often appear to misunderstand how research should be used to inform public policy. Often, you will hear them say some variation of this: "We have to do something to improve our schools -- and you can't prove my preferred reform won't make schools better!"

In fact, the burden of proof is on those who contend that charter school expansion, school closures/"renewals," merit pay, Common Core, universal enrollment, and so on will improve schools. If I or others present evidence that calls into question any of these policies, it is up to the promoters of those policies to show why that evidence is not germane.

For example: there is no question charter schools -- particularly the Newark charters run by big charter management organizations (CMOs) like TEAM/KIPP and North Star -- enroll very few Limited English Proficient (LEP) students. This puts the burden of educating these children on the public district schools. It explains why charters can spend less on instruction and student support services compared to NPS.

It is up to charter defenders to show why this doesn't matter when asserting charter claims of relatively better productivity. The burden of proof is on them, not on those who question their claims.

Much more to come... 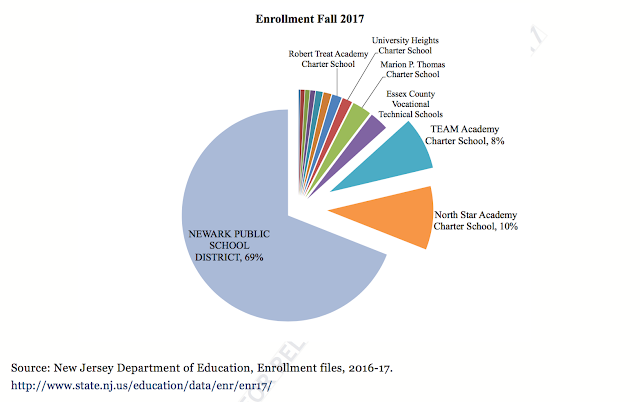