Charter schools have been in the news recently. For example:

For those who don’t have a clear idea of what charters are: They are publicly funded schools that are operated outside traditional school districts, sometimes by for-profit companies. Charter advocates say these schools offer choices to families that want alternatives to troubled neighborhood schools. Critics say charter schools take money from public districts that educate most American children and do not on average have better student outcomes than traditional public schools.

The National Alliance for Public Charter Schools (NAPCS) has been broadcasting a 7 percent surge in charter school enrollment during the 2020-2021 pandemic school year. Parents are “voting with their feet,” according to its new report, preferring charters to their local public schools. What the authors of the report avoid telling readers is that much of the increase — and likely most of it — was in virtual charter schools, the worst-performing in the charter sector. This occurred even at the expense of brick-and-mortar charters.

The report says this:

What exactly does “primarily” mean? How bad is the problem? To find out, the Network for Public Education did a school-by-school analysis of virtual charter growth in the states with the largest proportional enrollment increases.

We began with the three mentioned states. In Oklahoma, the virtual charter-school sector more than doubled enrollment. Ninety-seven percent of the more than 35,000 new students in charters enrolled in virtual schools — most in the for-profit EPIC, which has been repeatedly under investigation for misreporting costs to state officials, improper financial transfers and more.

In Pennsylvania, 99.7 percent of the charter enrollment growth occurred in virtual charter schools. Enrollment in the Commonwealth’s traditional brick-and-mortar charter schools increased by a mere 78 students.

Cyber charters accounted for over 131 percent of the growth in Utah, with enrollment in traditional charters declining.

We expanded our analysis to see if this trend occurred in other states. We began with Michigan, a state whose auditor general had recently released an audit finding that cyber charters could not document participation in at least a single course in more than half of the inspected student records.

The enrollment surge in that state’s cyber charters accounted for 237 percent of the increase. Cyber charters enrollment increased by 5,071 students, while traditional charter enrollment dropped by nearly 3,000.

We then looked at Arizona, a state where families have been bombarded with cyber charter ads and billboards. Over 94 percent of the charter enrollment growth in that state was in the cyber charter sector.

There was enough evidence of a trend that we expanded our analysis to any state with a 10 percent or greater increase in charter enrollment. The results are in the table below. 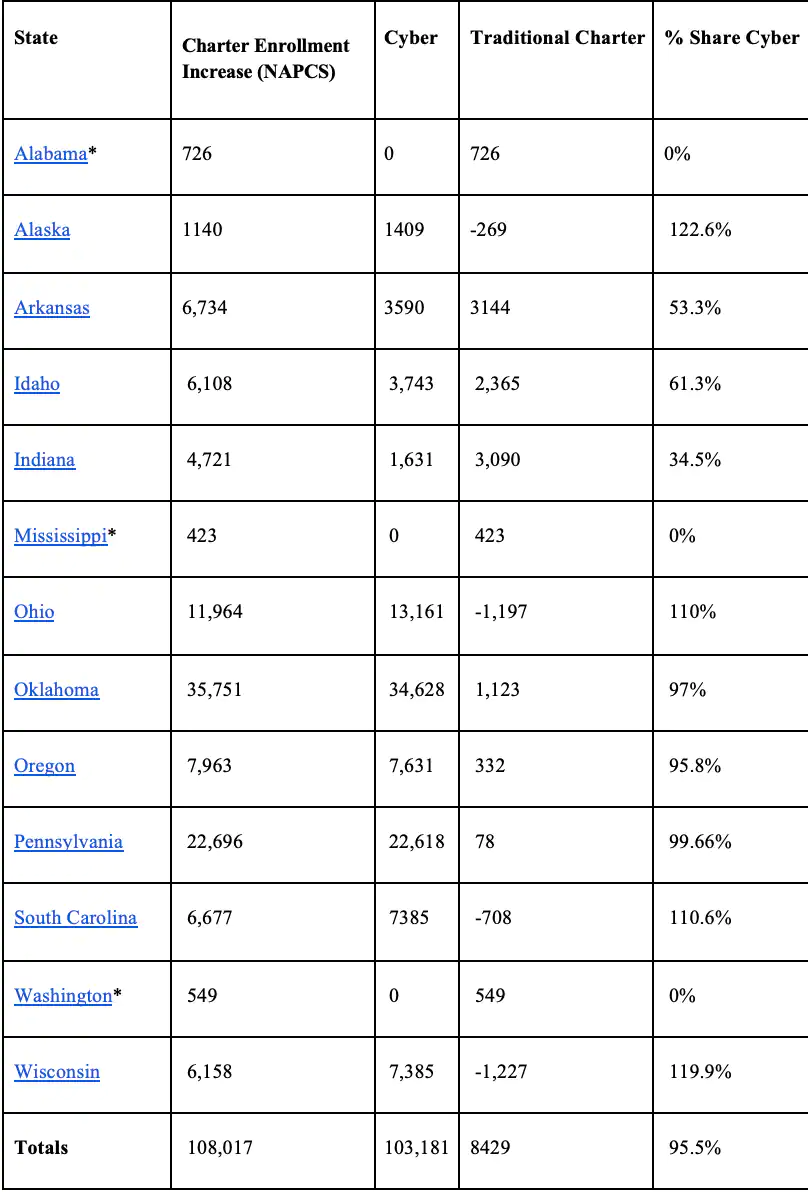 [You can find the info for each state by clicking on each: Alabama, Alaska, Arkansas, Idaho, Indiana, Mississippi, Ohio, Oklahoma, Oregon, Pennsylvania, South Carolina, Washington, Wisconsin]

Three of the 13 states with increases that exceeded 10 percent did not have cyber charters. They were responsible for only 1.57 percent of the total increase in the high-growth states.

Why cyber charter growth is a problem

Cyber charter schools embody all of the worst characteristics of the charter school world and none of its best. They have the worst student outcomes, the most prominent instances of fraud and scandal, the most egregious profiteering.

NAPCS released a report in 2016 — “A Call to Action: Improving the Quality of Online Charter Schools,” that decried the poor performance of online charters. It said: “The well-documented, disturbingly low performance by too many full-time virtual charter public schools should serve as a call to action to state leaders and authorizers across the country.” And there is no evidence that the problem has been fixed

The 2019-2020 graduation rate for cyber charters was just 52.6 percent, far below the overall average national graduation rate of 85 percent, according to a recent report by the National Education Policy Center at the University of Colorado at Boulder, titled “Virtual Schools in the U.S.: 2021.” Only 35 percent of all virtual charter schools rated by their states were found to be academically acceptable.

It’s not just abysmal graduation rates. The student course pass rate dropped — down to 50 percent during the 2018-2019 school year as enrollment in cyber charters increased, according to the recent Michigan audit. Michigan Virtual Academy, whose sharp enrollment increase contributed to the recent “charter school enrollment boom,” has a dropout rate of over 52 percent.

In California, Jason Schrock and Sean McManus used their A3 virtual charter schools to conspire with district and charter school officials to steal $400 million from taxpayers by creating phony enrollment and attendance records. [Both pleaded guilty to fraud-related charges.] It’s now being discovered the scope of the scandal expands beyond the state of California.

Ohio’s Electronic Classroom of Tomorrow, known as ECOT, was sued by the state attorney general to recover what the state said was $200 million in funds illegally taken from districts by using inflated enrollment numbers. The now-defunct virtual charter still owes $60 million in overpayments, years after it closed.

Oklahoma’s EPIC charter chain, which experienced tremendous growth during the pandemic, has been repeatedly in conflict with officials in that state for what the state auditor says was the chain’s ignoring the 5 percent cap on administrative costs and taking 25 percent off the top for its for-profit organization, as well as chronic misreporting of data. EPIC’s schools have a combined enrollment that is larger than any single district in the state. Last year, state Auditor & Inspector Cindy Byrd issued a report detailing a complex web that the charter chain used to funnel tens of millions of taxpayer dollars into a for-profit business. EPIC made some changes after the audit, but it has been under investigation by a grand jury, which released an interim report in May urging public entities to operate more oversight of EPIC’s schools.

Stride/K12 and Pearson’s Connections Academy are in the top seven for-profit charter chains as measured by the number of schools and enrollment. In 2020, Stride’s revenue topped $1 billion. The 2021 report by the nonprofit group In the Public Interest — titled “Costly Failure: California Is Overpaying for Online Charter Schools That Are Failing Students” — estimated that Connections Academy is likely overcharging taxpayers between 35 and 40 percent by comparing costs with California traditional charter schools. The report’s authors found that what Pearson charges is not dependent upon actual cost; they found a nearly $10,000 difference between the per-pupil funding that Connections takes in Pennsylvania as compared to Oklahoma.

For virtual charter chains, the Commonwealth of Pennsylvania is Candyland.

Every year, the Pennsylvania legislature proposes more bills for virtual charter reforms in funding, governance and transparency than any other state. And every year, those bills are defeated by the Republican legislature. A former executive of both K12 and Connections told me under the condition of anonymity: “I can count on one hand and still have plenty of fingers left over the number of states that instituted meaningful reform and held these schools to be accountable as they should be.”

Voting with their feet?

How do we account for the growing enrollment in cyber charters, including the recent surge?

The virtual schools engage in extensive marketing campaigns. Stride spent approximately $1.8 million in TV ads during the first quarter of this year, according to Steve Yoder of the Hechinger Report. Its rival, Connections, spent $1.2 million that quarter — with top expenditures aimed at reaching young children on YouTube channels for children.

For families in states with no mask mandates and unvaccinated young children, virtual schooling is sometimes the only safe alternative. And many of these schools offer enrollment perks, such as laptops, free Internet service. EPIC offers “learning funds” that give families an account to shop from a catalogue with a promise to receive an additional $200 in the fund for every new student they bring into the virtual school.

Commenting on the numerous studies showing the poor performance and learning loss for children enrolled in virtual charters, the charter advocates’ own report, “A Call to Action,” recommended:

Create maximum enrollment levels for full-time virtual charter schools that number in the hundreds of students instead of the thousands of students. This step will help ensure that operators will focus on enrolling students who will flourish in this type of environment, rather than just getting students in seats.

It’s not a time to celebrate growth; it’s a time to reform. 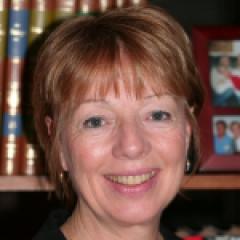