This week, I'm going into detail about a new report on New Jersey's charter schools I wrote with Julia Sass Rubin. In the last post, I showed conclusively that the charters enroll proportionally fewer special education students. In addition, the classified students charters do enroll tend to have less costly learning disabilities. This puts both fiscal and educational pressure on public district schools, which are forced to subsidize charters at the same time they must provide an education to students with special needs.

One of my more tenacious commenters keeps trying to make the case that the reason charters don't enroll as many special needs students is that they declassify special education students at higher rates than public schools. But there is no empirical evidence I am aware of to support this claim. Further, as I've showed before, NJ public district schools spend much more on the support services special education students need than charters. In addition, there are more support staff per pupil in the public schools than in the charters. All the evidence suggests the student populations of charters and public district schools are different.

I don't know why anyone would be surprised by this. The entire theory of charter schools is that they will enroll students who are a good "fit." Why, then, would we be surprised that the charter student populations aren't like the public school populations? Isn't that the entire point?

Keep this in mind as we now look at the differences in English language proficiency between public and charter school students. 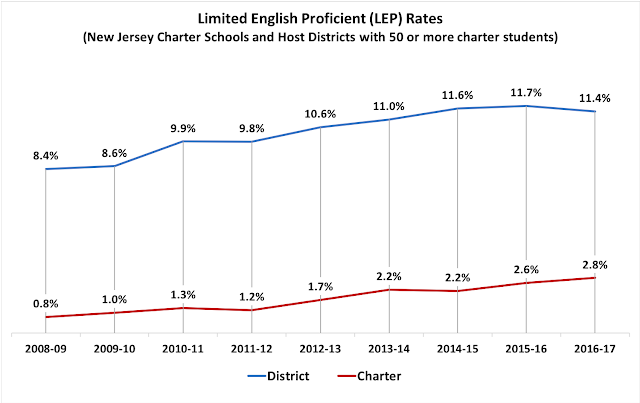 Again, you can try to make the case that this is because the charters remove LEP classification more than public, district schools. But there's no evidence to back up that claim. Further, there is a significant incentive for charters to have students retain their LEP classification, as charter schools receive more funding if they have more LEP students.

The idea that charters are so much better than public district schools at teaching LEP students that they can immediately remove their status, even at a financial disincentive, flies in the face of logic. It's also contradicted by one of the other arguments charter cheerleaders often try to advance: that the difference in LEP classification in some cities is due to the location of the charters.

It is certainly true that the charters often tend to cluster in neighborhoods with smaller Hispanic populations  -- that is likely the explanation for the difference in LEP populations in Newark. But so what? The charters chose to locate in those neighborhoods -- now the district has to pay the costs of educating a concentrated LEP population. Considering that a district like Newark has been underfunded for years while the charters are "held harmless," this remains a serious problem. 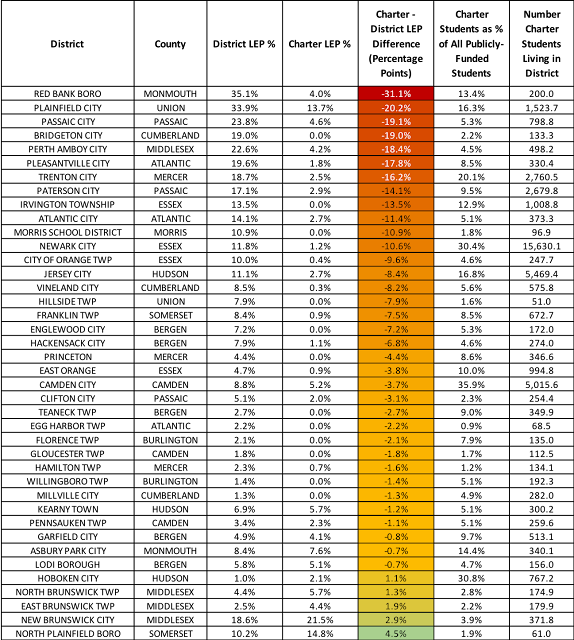 As I've noted before, the racial profile of Red Bank Boro -- where the disparity in LEP percentage is the greatest in the state -- is very different than the profile of the area's charter schools: 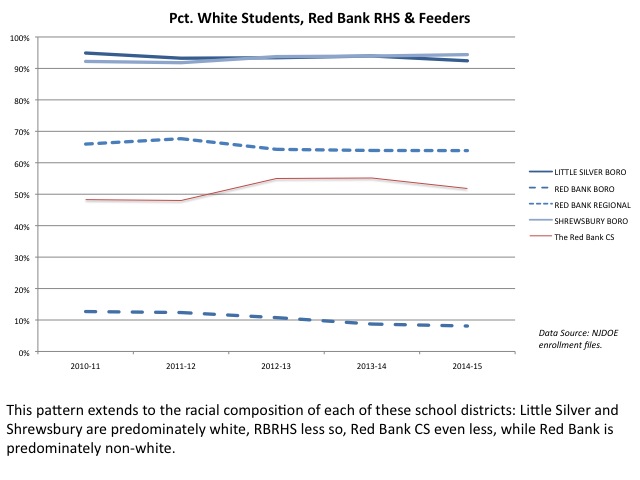 The idea that the huge disparity in LEP rates between Red Bank Boro and the students attending charters* can be explained by either LEP declassification or location of the school is very hard to defend when it's clear that far more white students proportionally attend the local charter school. The much more plausible explanation is that "choice" has led similar families to "choose" the same schools. This lines up with a growing body of evidence that shows that parents rely on their social networks to make navigate a "choice" system.

All this said, look at some of the districts at the bottom of the table. In North Plainfield and New Brunswick -- communities with large rates of LEP classification -- the charter schools, as a group, actually enroll more LEP students.

I would suggest the data here shows that it's at least possible that charters could enroll more LEP students. Where then, has the state been during the last decade? Why aren't they demanding better from the entire sector?

I'll talk about disparities between NJ charters and public district schools in socio-economic status next.