Jersey Jazzman: The Failure of State Control in Camden, NJ

In my last blog, I wrote about the NJ Auditor's report on Camden's "Renaissance" schools. These charter-district hybrids, run by three of the region's biggest charter operators -- Mastery, Uncommon, and KIPP -- were supposed to show definitively that charter schools could serve all of the children in a neighborhood. They weren't going to "skim the cream" any more; instead, they'd take every child, no matter their family background or educational need.

How could this happen? Why didn't the Camden City Public Schools administration pick up on this problem? How could they have missed this? Weren't they paying attention?

As it so happens, the Auditor, Steven Eells, has been busy: not only did he and his staff examine the Renaissance schools -- they looked at the district as a whole. And what they found isn't very encouraging (all emphases below are mine):

The lack of continuity within and oversight of the district’s business office functions has resulted in a lack of control and accountability of the district’s finances. The lack of stability in administrative positions inhibited the development of long-term goals and the ability to establish and enforce internal controls to ensure district resources were expended in an efficient and effective manner and assets were properly safeguarded. The financial transactions included in our testing were related to the district’s programs and were reasonable; however, they were not always properly recorded in the accounting system, and there were many instances when requested documents could not be provided. We found programs lacking internal controls and proper oversight, significant deficiencies in the procurement process, and other issues requiring corrective action. Certain provisions of the Urban Hope Act included in our testing were complied with by the district with the exception of those related to enrollment.

Before we dive into this, let's step back and recall some history:

Way back in 2012 -- back when Chris Christie was making teacher bashing fashionable -- a couple of low-level bureaucrats in the NJ Department of Education came up with a plan for Camden's Schools. The idea was to take power away from the local school board -- which didn't have much power anyway as it had been subject to the direction of a state fiscal monitor since 2006 -- and shift control to the Christie administration and the State Board of Education. This would allow charter schools to flourish while CCPS schools were shuttered.

It's worth noting that the guys who came up with the plan were paid by California billionaire Eli Broad, who was the patron of then-Acting Commissioner of Education Chris Cerf. The next year, Christie went all-in on Camden and had the state take overt the district. The excuse was that Camden was such a failure, the state really had no choice.

Christie proceeded to go out and get a very young fellow to be his new superintendent. Paymon Rouhanifard had, at best, six years of total experience in education, but apparently that's all he needed to take on arguably the toughest school leadership job in the state.

Rouhanifard left CCPS last year; when the Auditor discusses the state of Camden's schools, he's discussing Rouhanifard's legacy. I've already gone over the issues with the Renaissance schools' enrollments; let's look at what else the Auditor found in Camden:

It's really no wonder that the Renaissance schools weren't being properly monitored -- The district itself was failing in its core responsibility to monitor its own finances.

Keep in mind that Rouhanifard, like Cerf, made his bones in the NYC school system under Mike Bloomberg and Joel Klein. This was the heyday of the "disruption" doctrine of school leadership -- and disruption meant kicking out people who had built their careers in the school system and replacing them with hotshots who would come in turn over a few art supply carts.

The problem with this mindset is that institutions like school districts really need stable, experienced leadership. For example:

The district’s business office has been negatively impacted by frequent turnover within managerial positions. The lack of employee continuity has disrupted the internal control system in place. During our 32-month audit period, the School Business Administrator position was held by three different individuals. Also, the Assistant Business Administrator, Comptroller, Payables Manager, and Senior Payroll Manager positions have been abolished. Additionally, 23 upper-management employees separated from employment with the district.The average length of time these employees worked for the district was three years. This turnover has contributed to the erosion of internal controls.

Again: stuff like this was the whole reason Christie insisted the state had to take over CCPS. But then he appointed a wet-behind-the-ears superintendent who, it turns out, was clearly out of his depth. No surprise -- Christie did the same thing in Newark, and we all saw how that went...

I've said this repeatedly, so you'll pardon me if this is getting stale, but I'm going to give it yet another go in the hopes that maybe it starts to stick:

White parents in the leafy suburbs would never, ever, put up with state control of their schools -- especially if that meant having to deal with a superintendent who had no experience running a school, let alone a district.

The idea that state control is the only solution for "failing" urban schools is built on a nasty bedrock of racism. But on top of that: State control of schools clearly doesn't work.

I know credulous reporters love to eat up pre-digested talking points about soaring graduation rates and skyrocketing test scores to justify these state interventions. But when you look at these metrics properly, it turns out the grad rates are simply part of overall trends (more here), and the small bumps in test scores are best understood as artifacts from changing the tests, not as real improvements in teaching and learning.

Camden deserves better. It needs experienced, competent leadership that can properly manage the district's finances. It needs adequate and equitable funding. It needs a system of school governance that allows all local stakeholders to have a say in how the system is operated -- just like almost every other district in the state.

State control has failed in Camden. It's time to admit it and move on to something better. 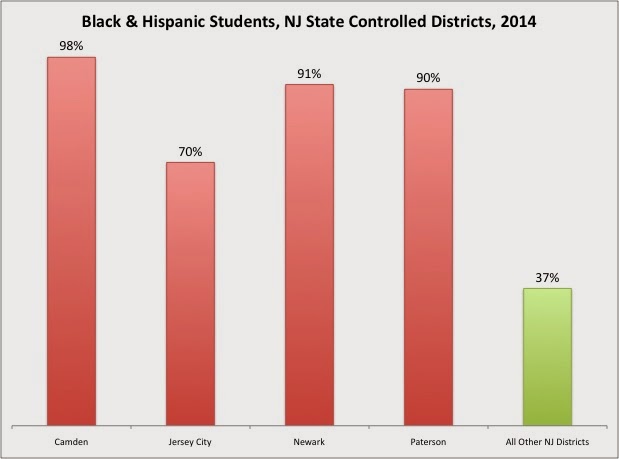 ADDING: I had complained in my last post that the media did not pick up on the Auditor's report on the Renaissance schools. But, to their credit, both NJ Spotlight and the Courier Post have since reported on the Auditor's findings.