Well, Jay Greene said he was going to do it. Back in February, in his gig as Defund Public Education Guy at the Heritage Foundation, Greene published "Time for the school choice movement to embrace the culture wars." 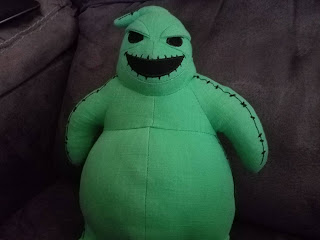 Greene argued that the culture wars were an opportunity that choicers "should not squander." Heritage had some data that showed an overlap between the anti-woke crowd and the anti-public school crowd, and Greene argued that it was time to put that to work. Not a shock; Chris Rufo was arguing last spring that the road to choice was through sowing distrust in public education. But while Rufo likes to play Crusading Journalist and Firebrand, Greene has positioned himself as more of a rational academic (with citations and stuff).

And so we arrive at his latest-- a report thingy at Heritage entitled "Empowering Parents with School Choice Reduces Wokeism in Education." The piece is co-authored by Ian Kingsbury, who previously worked for cyber school giant Stride (formerly K12) and the Empire Center; these days he's a senior fellow at the Education Freedom Institute ("Protecting and promoting school choice") which is led by defunding crusader Corey DeAngelis, so you know he's approaching this work with an unbiased view.

That's okay. I read this so you don't have to.

The report has an academic research costume on, but it is something else. And we catch a whiff right in the first lurid paragraph. I'm going to take a minute with this because it gives us a strong sense of where this is all headed.

American K–12 education is currently mired in an unmistakable radical leftward lurch.﻿ Whether changing the pronouns of students without informing their parents, eradicating academic standards in the name of “equity,”﻿ infusing ahistorical curricula meant to engender contempt for the United States, or lobbying the Department of Justice to label anyone who opposes any of the former “domestic terrorists,”﻿ progressive activists are increasingly able to use America’s schools as a tool for advancing their woke agenda.

Every one of those burning clauses comes with a footnote. It's online, so they could come with links instead, but footnotes are more legit and researchy. The closest to a legit source is the last, which takes us to a Wall Street Journal story about Merrick Garland's dumb letter that gave parental rights groups the chance to complain they were being oppressed as terrorists. The 1619 rebuttal is from Naomi Schaeffer Riley, a senior fellow at the right-tilted American Enterprise Institute. Another is from the Empire Center, a project of the Manhattan Institute (current employers of Chris Rufo). And the first two are from the Washington Free Beacon, a right wing faux journalism outfit backed by hedge funder Paul Singer. In other words, not a fact in the bunch--just the kinds of links to other opinions that you would expect in a blog post.

"Blog post masquerading as research report" is exactly where we're headed. There's some more ranting about the state of public schools these days interspersed with questionable assertions such as

Since parents, on average, demand far less wokeism than schools supply, shifting more power to parents will reverse this leftward lurch of the education system.

That sounds like an assertion that could be tested, and there's a footnote that links to... the Jay Greene post I mentioned at the top, which does include some survey questions handled by Ipsos, a multinational marketing firm, and aimed at producing the desired results.

Anyway, we work our way around to the central idea--

At the heart of this debate is an empirical claim that can be tested. Does giving parents greater control over choosing their children’s schools actually reduce how woke those chosen schools tend to be? If it does, then expanding school choice offers greater promise given the difficulty of getting a recalcitrant school system to comply with direct bans on woke indoctrination. If, however, parental control over chosen schools makes little or no difference, the skeptics may be right that expanding choice could fail to combat radical ideology in the classroom, even if it helps families in other ways.

Yes, boys and girls--wokeness can be measured empirically, and you will be amazed at how easy it is to do.

There are some more unsubstantiated assertions linked to Things That Are Not Research (did you know that progressives "have enjoyed near monopolistic control of universities for decades"--well, an article in National Affairs says so) before we arrive at the methodology for figuring out just how woke charter schools and public schools are, and it is astonishing. Stay with me now.

They measured how "woke" a charter is by searching the  student handbook for eight terms-- (1) diversity, (2) equity, (3) inclusion, (4) justice, (5) restorative, (6) social-emotional learning, (7) gender identity, and (8) culturally affirming. They did this for the 20 largest charters in each state (and skipped states that didn't have enough to participate). As they searched through each of the several-hundred handbooks, they made sure not to count instances where these words were used for non-woke purposes.

The checked this against the level of charter autonomy in each state on the theory that where there was less autonomy, there would be more wokeness enforced by the state. The get that figure by using the charter sector scores that the Center for Education Reform (Jeanne Allen's rabidly anti-public ed outfit) gave states.

And to compare these wokeness scores to the public schools and thereby prove their thesis that charters offer a wokeness respite, they... wait a minute. Hold on. No, they didn't gather any data about public schools at all. They're just going to correlate their wokeness index with "regulatory capture."

After that it's just math. The states that scored below average for the CER ratings (aka have more state regulation) also have more instances of those woke words in their student handbook. And vice versa. Also, just to up their game, they searched for handbooks that included all of the eight terms, and the correlation held. They even made a chart. 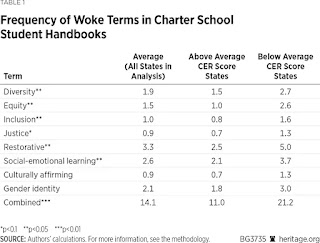 Or this charter woke-osity chart breaking it down by state. Because charts = science. 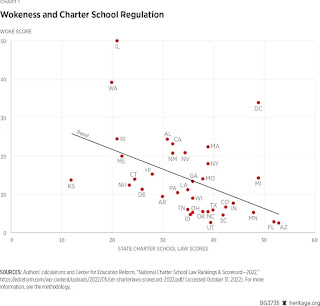 Greene and Kingsbury argue that this analysis "lends credence" regulation is more woke than the free market, and therefore charters are more responsive to parents, all of whom dislike wokeness which we know because we just, you know, do.

What else can they squeeze out of this "analysis" of the "data"? Charter authorizers and bureaucrats might be more woke than average citizens. Maybe states with so much charter wokeness create a "woke duopoly" in which parents (who, as we know, all hate woke-itude) choose the lesser of two evils. Conservative states with highly regulated charter markets should loosen up in order to drive out excess woke-osity (Alabama, get with it). And just generally, charter schools should be regulated less because they should, and because the woke!

As always, I wonder if it's no longer a conservative value to want accountability from government and know how your tax dollars are spent.

Look. This report is twelve kinds of baloney. Eight key words are a terrible way to grab a wokeness score (though I suppose it helps if, like the authors, you never really try to define the term "woke"). Assertions are not facts or data, and other articles produced by your colleagues in the same camp are not research. And even if, by some miracle, we accepted any of what's asserted here, we'd still be left with a big question--what if every public school has a lower woke score than any of these charter schools.

This is not research. It is not a report. It's a blog post with a snazzy heading. It's an op-ed in search of a newspaper, though I expect it will find its way there in some form, because mostly this is just an argument to reduce regulation and promote charter schools. It's trying to harness the culture war so the opportunity isn't wasted. "Unregulated school choice will rescue your child from woke-ification!! Oooooooooo!!!!" It's the folks who want to defund public education just trying another angle. To try to dress it up as science is intellectually dishonest. It's bad PR, with charts. Everyone deserves better.