Long time readers know I have always thought one of the most interesting charter school sectors in New Jersey, if not the United States, is in Hoboken. A small city across the Hudson from Manhattan, Hoboken has undergone a period of extraordinary gentrification over the last several years. As detailed in a great book by Molly Vollman Makris --  Public Housing and School Choice in a Gentrified City; Youth Experiences of Uneven Opportunity -- Hoboken's charter schools have become an alternative system of schooling for affluent parents in a city that still has large numbers of children living in public housing and experiencing economic disadvantage.

I interviewed Molly back in 2015, and she made an important point: segregation is not an issue that can be laid entirely at the feet of Hoboken's charter schools. There are, in fact, many factors involved in why Hoboken's schools enroll the student populations they do. But the charters, as Molly put it, are part of the reason the city hasn't been able to adequately address the realities of segregation:"So I don’t think the charters and intra-district school choice are creating segregation so much as inhibiting desegregation. I think we all could do a better job."

Other than a few visits with family, I haven't been back to Hoboken much since I did that interview. But I've kept my eye on the city, if only because I think it's a unique case study in the annals of school choice. So my spider-sense buzzed a bit when I came across this (all bolded emphases in this post are mine):

At a Hoboken Board of Education meeting on Tuesday, Dec. 10, the board voted 8-0-1 in favor of a resolution opposing Elysian Charter School's request to the state to add 36 students in K through fifth grade.

The resolution approved 8-0-1 states, "Imposing increased charter school costs on the Hoboken Public School District, in addition to the aforementioned loss of state aid and on top of normal and expected annual cost increases, will result in further budget reductions and program cuts in the district schools to the detriment of the district academic programs."

It also charges that the charter schools have an "increasing segregative" effect on students, saying that Elysian educates a "disproportionately low number of economically disadvantaged students."

I'm going to stay away from the funding issue now, although I promise I'll be coming back to the topic later this year (I've got a few things cooking on the NJ school funding front, and work on charters and school funding is later). But the issue of segregation on Hoboken's charter schools is worth looking at more closely.

Elysian CS says it is not having a segregative effect; here's their response from the school's website:

If you take a minute to think about this statement, you'll realize it makes no sense. The overall population of disadvantaged students -- as measured by eligibility for free or educe price lunch -- may be decreasing, but that doesn't mean the student populations couldn't still differ greatly between the Hoboken Public Schools and the city's three charter schools.

In addition, Elysian is making a bold claim: that the charters are enrolling proportionally more disadvantaged students. Is it true? Let's start by looking at eligibility for free lunch (FL), which means a student's family has an income at or below 130 percent of the poverty line. 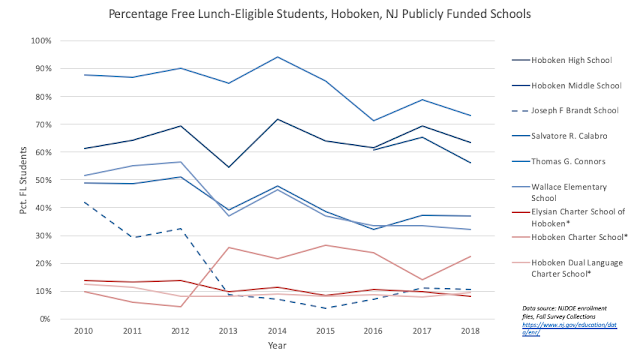 The three charters are in red; HPS schools are in blue. I have Brandt School set aside as a dotted line because it is unlike the other HPS schools in that it only enrolls children up to Grade 3 (originally, the school was the district's early childhood center; there's talk it may return to that function).

What does the data tell us? Hoboken Charter School has, indeed, enrolled more FL students.* But Elysian's free lunch-eligible population has actually decreased since 2010. Hoboken Dual Language CS (also know as HOLA) has seen little change in its FL population.

What about free and reduced price lunch (FRPL) eligibility, which sets a higher family income bar of 185 percent? 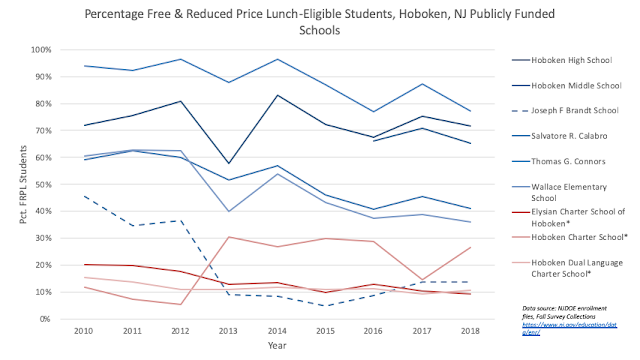 Again, since 2010, Hoboken Charter School has seen a rise in its FRPL population -- but not Elysian (or HOLA). Put simply: Since 2010, Elysian's student population has been more advantaged than all other comparable schools in the Hoboken Public Schools district. 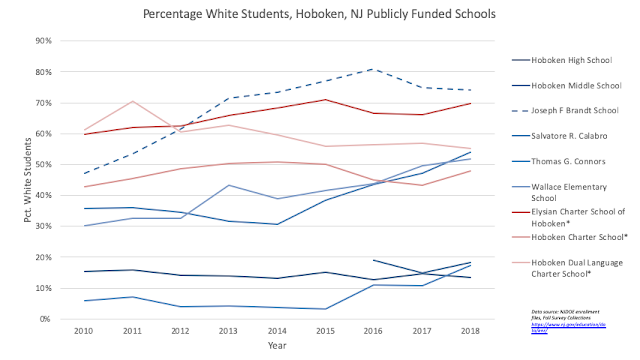 Again, if we leave out Brandt, with its uniquely young student population, we find the charters have tended to enroll more white students than most HPS schools. That's changed a bit over the last several years... except for Elysian Charter School. If anything, Elysian's student population has become more white since 2010. 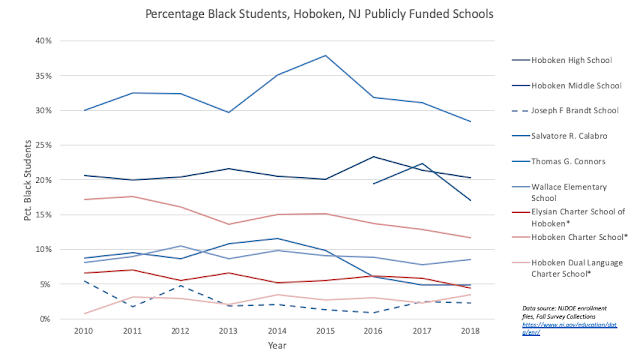 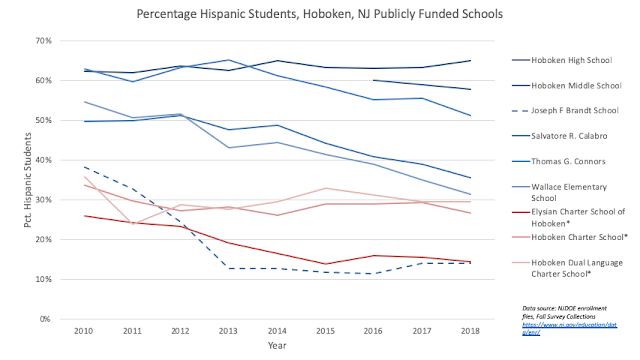 Let's be clear: when it comes to racial segregation and schools, there's much more going on in Hoboken than just the charters. The difference in the proportion of black students at Connors is striking when compared to the charters or the other K-6 schools in the HPS district. The decline in the Hispanic population in Wallace and Calabro is also remarkable. This said, it seems very odd for Elysian CS to deny the segregative effects of Hoboken's charter sector when viewing this data.

Let's look at one more important student characteristic: special education status. Here are the special education classification rates, which are reported at the district level, for the charters (which are de facto their own districts) and HPS (sorry about the color changes). 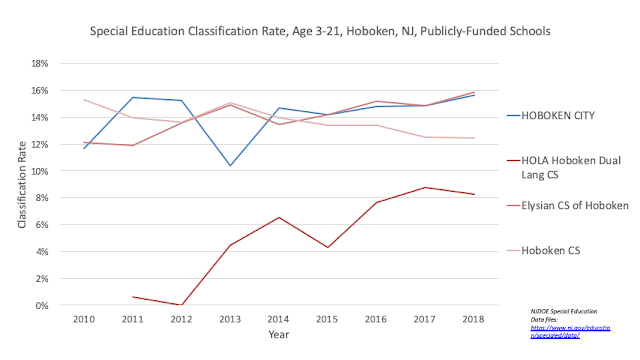 At first glance, it would appear that Elysian is actually pulling its weight when it comes to educating children with learning disabilities: their classification rate is nearly identical to HPS's and has been for several years.

The problem is that not all children have the same disabilities. 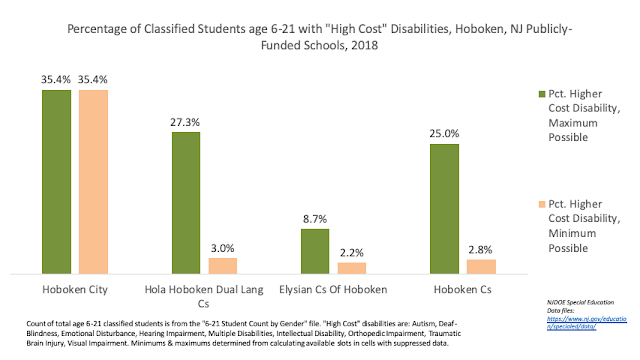 A bit of explanation is in order. NJDOE reports the number of students classified in one of 12 different types of disabilities. But if a district has fewer than 10 students in a particular type of disability, it suppresses the data.** It doesn't suppress a cell, however, if it has "0" students. Because of this data structure, and because we can get the total number of students from other data sources***, we can extrapolate the possible ranges of "high-cost" disability proportions.

What are "high-cost" disabilities? I basically count all disability types except for three: specific learning disabilities (SLD), speech and language (SPL), and other health impairments (OHI). SLDs and SPLs are generally learning disabilities that do not require the same level of intervention as things like autism, traumatic brain injuries, emotional disturbances, and so on. OHIs can range in severity, but often include things like asthma or ADHD, which, again, usually;y require less-costly interventions.

Of course, I'm not saying these disabilities can't be profound; as an educator, I will tell you first-hand they can be. But empirical studies have shown these three disability classifications tend to cost considerably less to address than the others.

By my calculations, only 9 percent of Elysian's special education population, at most, has been identified with any of the higher-cost disabilities. This contrasts sharply with the 35 percent figure for HPS.

Let me say what I always say when looking at the data for individual charter schools: I have no doubt Elysian Charter School has great teachers, wonderful children, and dedicated families. Like all schools, its stakeholders should be proud of their school's accomplishments and successes.

But good public policy is built on solid analysis of relevant data. And state data makes one thing very clear: the students in Hoboken's charter schools are fundamentally different from the students in its public district schools.  In the case of Elysian, that means fewer students proportionally who are in economic disadvantage, or who have a profound special education need.

Again, we'll get to the fiscal issues later. But for now: I don't know why anyone would be surprised that HPS's Board of Education has serious doubts about expanding the size of Elysian Charter School.

More to come later this year...

ADDING: Back in 2015, Elysian's senior staff was making a splash with their... unique theories on school funding.

* Hoboken Charter School is the only one of the three charters with a high school. According to Molly's book, many affluent parents do not see this high school as an option for their children, even as they enroll them in the K-8 school. The high school is actually in a separate building, quite a ways away from the K-8 school. So it's very likely that many of the students who boost HCS's overall FL percentage are in the high school.

I can't tell how the 9-12 and K-8 population of HCS differs on FL or FRPL status, however, because NJDOE data does not disaggregate this data by grade level in charter schools -- even for different school buildings, like it does for district schools.

This is a major failing of the NJDOE data I've pointed out numerous times. It shouldn't be hard at all to fix, either. So let's do that. Please.

** Contrary to the reporting of some people who really have no damn idea what they are talking about, NJDOE has, in the past, released databases that do not suppress this data. They last did so in 2016. Unless and until they say otherwise, I will reasonably assume that data is correct.

*** Age 6-21 classified student counts can be derived from the gender files, or the LEP files. Just add males and females, or LEP and non-LEP, together.