The pandemic has been very, very good to Sal Khan, and he's ready to grab the big sticky ball and run with it. He recently did an interview with Emily Tate for EdSurge, and it's all just as discouraging as you would expect.

Khan opens with a few thought about pandemic life in the Bay Area:

“Obviously, some aspects have been suboptimal for everybody,” he says, acknowledging that his family has been extremely fortunate. “Every now and then, it's been hard to do a call while the kids are screaming or something like that, but between meetings, to see them or have lunch with them or go on a walk with them, that part has been actually quite nice.” 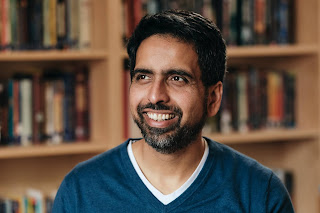 Then, just a few paragraphs later, Tate asks "How did you adapt to meet the needs of students during the pandemic?" Spoiler alert: his answer does not have anything to do with having lunch in person or taking walks together. But it did introduce me to another data-tastic term.

I'm going to assume that "learning minutes" is a clever rebranding of "screen hours." If not, I'm dying the see the research that allows Khan to distinguish between minutes in which students are learning things and minutes in which students are staring blankly at a screen. But the non-answer to the question transitions into a plug for a new Khan product--Khan Academy Kids (slogan--"Joyful learning starts here!")

Khan Academy Kids is a "free, fun educational program for children ages two to eight." Tate offers Khan the chance to tell the story of this new program.

Let’s rewind to six or seven years ago. Everyone used to ask me, “What about early learning?” Honestly, I had a young family then, and I saw more than ever how important those pre-K years are. And I saw the advantages my kids had before they showed up to kindergarten. Most people who are middle-income or better, the Common Core kindergarten standards almost seem ridiculously easy. Like, of course my kid knows how to do those things. They probably got that [concept] when they were 3 or 4 years old.

But then you see so many kids who might show up in kindergarten the first day—and this was eye-opening to me—who haven't seen a book, some of them have never been read to.

And so immediately, out of the gate, in kindergarten, you're setting up a hierarchy of who's likely to succeed and who's likely not. So there's clearly a space for this, but I would tell people, “I have ideas, but that's not my expertise, and we don't have the expertise in-house.”

That expertise was shortly to arrive via Duck Duck Moose. That company was founded in 2008 to create learning apps for children. The three founders included Carol Hu Flexer (degrees in architecture, former product manager at Intuit, granddaughter of Hong Kong book publisher), and her husband Michael (software engineer at multiple start-ups). The Flexers had a two year old child who, they noticed, liked to play with their iPhone, so they went ahead and decided to start another start-up, tapping friend Nicci Gabriel, with whom Michael had done some work before, as a designer and illustrator. Gabriel started out as pre-med. The Flexers have classical music training.  You'll have noticed that nobody involved has actual education background, but they do have a process, described as "Observe children. Brainstorm. Prototype. Build. Test with children. Learn. Refine. Repeat all steps again. And again. And again."

They were founded in the Bay Area as a for profit company and picked up investments of about $7 million in venture capital, backed by Stanford, Lightspeed Venture Partners, and Sequoia Capital. They developed 21 apps and won some awards. Then, in 2016, the company was "donated" to Khan Academy. Khan tells the story of them approaching him and, instead of cashing in through acquisition offers, looking to secure a legacy of "impactful education work." So now they are Khan Academy Kids.

Khan acknowledges that children need more than screen time ("outdoor play, being with friends, and ideally a pre-K program") and says that the app "leans quite heavily on social-emotional learning." And he cites a UMass study of 4-5 year olds using the app which found it got better results when compared to "two wholesome apps that did not target kindergarten readiness skills." That seems to be the source of a twenty-minute recommendation for the amount of time to park your tiny human in front of a screen.

The interview also includes plugs for schoolhouse.world, an enterprise we've covered before. Short form: peer-to-peer tutoring, micro-credentials, and a batch of shady characters including Arne Duncan.

It's appropriate that Khan tells his own story in plugging schoolhouse-- "Khan Academy started with me being an analyst at a hedge fund and I was tutoring my cousins." Khan also notes "We've always known that the gold standard has always been high-quality tutoring, but no one's ever acted on it because it's hard to scale and expensive." Spoiler alert: schoolhouse.world does not solve any of those issues , nor is it about high-quality tutoring. It's more of the stuff built on a foundation of well-connected, well-heeled amateurs who figure they can easily create an educational revolution.