Jersey Jazzman: Kids in Disadvantaged Schools Don't Need Tests to Tell Them They're Being Cheated

There was a very raw, very discouraging story in The Trentonian this past week that is worth your time, whether you live in Jersey or not. Here's an excerpt:

Over the past year, this newspaper spoke with high school students educated in the Trenton Public Schools (TPS) district. The interviews took place in the presence of an adult and the teens were granted anonymity to speak freely and honestly. Each interview started with vague questions, such as “What is it like to live in Trenton?” While some students also spoke about nice and community-oriented neighbors, each of the conversations began with a discussion about violence.

“The school smells like weed,” a highschooler said. “They smoke in the hallways and stairwells almost everyday.”

While some students said school guards “try to stop bad behavior” and convince kids to stay out of trouble, others described guards as “too young,” with “not enough care” for what happens.

“This guy told the security guards what was going to happen to him, but they didn't care enough to do anything about it, so he got jumped,” a teen said. “They don't take their job seriously.”

And as for teachers: “I feel like it depends on whether they know the student wants to change,” a teen said.

Students said some teachers will remain persistent in trying to convince a kid to stay out of trouble. But if they realize their advice is not improving behaviors, “they just give up.”

“I think that’s why a lot of people say teachers don't care either,” a student said. When asked to estimate the percentage who don’t seem to care about the students in their school, the majority of the teens said approximately 70-75 percent of teachers seem like they don't want to be there.

One teen suggested the teachers have cause for not caring: “They have to teach in Trenton and dealing with kids’ attitudes is just overwhelming for them after a little while. It's not getting better, it's getting worse.”

Teens estimated 60-70 percent of students seem to not take school seriously. One teen described negativity as their greatest challenge living in the capital city.

“Negativity seems to be everywhere in Trenton; you can't run from it,” she said. With a toxic environment as described by teens interviewed for this report, it’s no wonder that the TPS district high school graduation rate for the class of 2017 was only 70 percent, according to state department of education data. That low figure is due in large part to Daylight/Twilight’s graduation rate of 34 percent. Both Trenton Central High School campuses graduated more than 80 percent of its 2017 class.

Again, this is a tough piece of writing. But I thought it was well worth it, because the whole story raises some very uncomfortable questions as states head into their budgeting seasons:

A few days ago, a New Jersey appellate court threw out regulations that made the PARCC Algebra I and English Language Arts (ELA) Grade 10 tests a requirement for high school graduation. One of the most prevalent arguments for the PARCC -- which is based on the Common Core standards -- is that if we didn't have high standards and tough tests to match them, we are "lying" to students.

This argument is aimed particularly at schools like those in Trenton: "failing" schools, as reformers are so eager to call them. Apparently, many of us have deceived ourselves into thinking everything is fine in places like Trenton. Worse, students and parents, according former SecEd Arne Duncan, believed the lie. Only the hard, cold reality of testing could free us all from our delusions.

Now, I've been around a lot of testing skeptics, and I can assure you I've never once met one who was convinced that schooling in disadvantaged neighborhoods was generally acceptable. I've never met a union official who believed schools in impoverished cities didn't need improving. I never met anyone who works in a school or advocates for public education who was fine with the opportunity gap that plagues so many children in this country.

But I'll set that aside and instead make this point: stories like the Trentonian's give us clear evidence that kids who are in these schools themselves know full well what is going on. They are saying, with unmistakable clarity, that their instruction is unacceptably poor. They are telling us many of their peers have given up and have no interest in school.

What are multiple administrations of standardized tests going to tell us that these kids aren't already telling us themselves?

As I said last time: I am all for reasonable accountability testing. Test outcomes have been used by researchers and advocates to show indisputable truths, such as:

1) When it comes to school, money matters. A lot.
2) Children who come from disadvantage need more resources to equalize their educational opportunities.

Some make the argument that we have to have tough tests to motivate schools to improve. Most of these people don't know the first thing about how these tests are constructed or what they actually measure, but even if they did: What, exactly, do they want to do with the information they get from these tests?

Do they really want to deny students, who went to their classes and played by the rules, their diplomas? What will that accomplish? Will it make the students and teachers "do more with less"? Will it improve the lives of students who don't pass these much more challenging PARCC and upcoming PARCC-like tests?

The idea of requiring students to pass tests with current passing rates of 46 percent strikes me as both cruel and capricious. Cruel because denying graduates a chance to participate in the workforce or join the military or pursue higher education is unnecessarily harsh when these students did exactly what they were told to do. Capricious because we changed the rules on these students quickly and with little forethought, and we didn't even stop to ask if their schools have what they need to help students pass these tests.

Now, if these same people who are demanding more and harder tests were also the same ones demanding full, adequate, and equitable funding for schools, I'd be more amenable to their arguments. Unfortunately, however, these folks -- like Duncan -- don't ever put school funding at the top of their lists of policy preferences.

I've heard a lot of crowing from certain quarters about how great it is that Trenton is getting a new high school in 2019. Certainly, the kids deserve it... but why did it take so long when high school kids in Trenton have been attending a school that is dirty and dangerous for years? 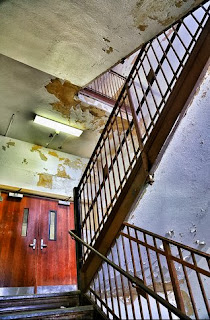 And what about all the K-8 schools in Trenton that are in need of repair and renovation? Where is any urgency to address this?

A couple of years ago I gave a presentation to the Trenton Education Association. Here's one of the slides: 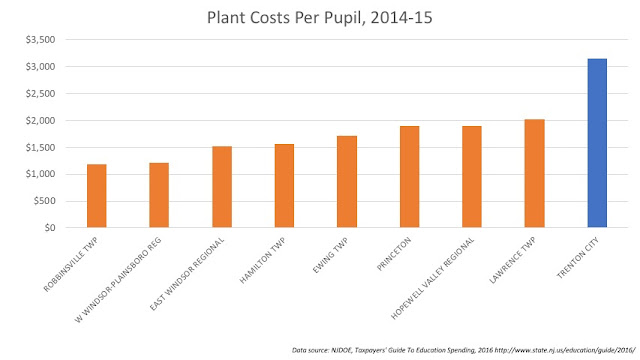 Why are plant costs so much higher in Trenton? Because it costs much more to maintain old buildings that weren't properly cared for over the years. TPS is playing a constant game of catch up. Why? 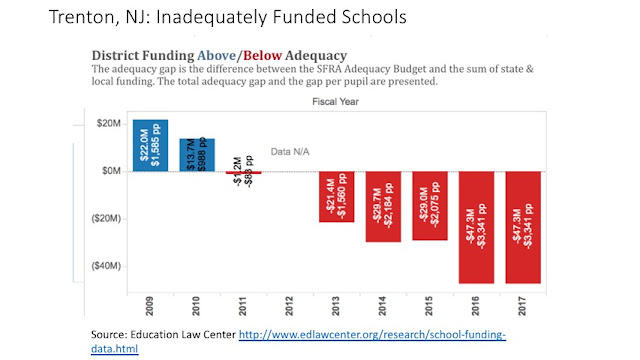 Because the district has been underfunded millions less than what the state's own law says it needs.

Again: if the folks demanding harder tests were proposing that Trenton, and all other districts, got the funding they needed to at least generate average test outcomes, I'd at least say they were being honest about what it takes to close the opportunity gap. But no -- what we get from them instead is school "choice" and finger-pointing at unions and test-based teacher evaluation and a lot of other stuff that has never been shown to work and/or been brought up to scale... and in some cases actually drains more money away from the schools serving the most disadvantaged students.

This kids in Trenton are telling us the their education is not equivalent to the schooling kids in the Windsors and Princeton receive. We don't need more tests to tell us that -- the kids themselves are saying it.

The only question left is: what are we going to do about it?