Why do our new Secretary of Education and her husband support school vouchers? Back in 2001, they were quite candid about it:

The billionaire philanthropist whom Donald Trump has tapped to lead the Education Department once compared her work in education reform to a biblical battleground where she wants to "advance God's Kingdom."

Trump’s pick, Betsy DeVos, a national leader of the school choice movement, has pursued that work in large part by spending millions to promote the use of taxpayer dollars on private and religious schools.

Her comments came during a 2001 meeting of “The Gathering,” an annual conference of some of the country’s wealthiest Christians. DeVos and her husband, Dick, were interviewed a year after voters rejected a Michigan ballot initiative to change the state’s constitution to allow public money to be spent on private and religious schools, which the DeVoses had backed.

In the interview, an audio recording, which was obtained by POLITICO, the couple is candid about how their Christian faith drives their efforts to reform American education. School choice, they say, leads to “greater Kingdom gain.”

The two also lament that public schools have “displaced” the Church as the center of communities, and they cite school choice as a way to reverse that troubling trend. [emphasis mine]

The DeVoses made these comments at "The Gathering," an annual conference of wealthy Christians that pushes a hard-right social agenda, including normalizing homophobia, destroying women's reproductive rights, and even denying climate science.

Certainly, the DeVoses buy into the idea that "competition" will improve schools -- but let's not for a second believe their school "choice" agenda stops there:

The DeVoses say in the 2001 interview that they adhere to the Calvinist perspective of Christianity. Richard Israel, a professor of the Old Testament at Vanguard University in California, said Calvinists see it as the work of Christians to influence culture.

“Their view of the Christian mission isn’t to be in the fortress and hold out against the pagans, but to engage culture from a Christian worldview and transform it," Israel said.

“We both believe that competition and choices make everyone better and that ultimately if the system that prevails in the United States today had more competition — there were more choices for people to make freely — that all of the schools would become better as a result."

However, the DeVoses also say public schools have “displaced” the church in terms of importance.

Now, I've been doing some research lately into the origins of school "choice" in America. Undeniably, the current choice movement has its origins in segregationist ideology in the South. I'll be saying a lot more about this later, but for right now, check out Jim Carl's Freedom of Choice: Vouchers in American Education and Kevin Cruse's White Flight: Atlanta and the Making of Modern Conservatism for the history.

As the 60s and 70s progressed, it became clear the "choice" movement wasn't going to be sustained by appealing to segregationists; another rationale had to be sold to the public. Enter Milton Friedman, the Nobel Prize winning economist whose 1962 best-seller Freedom and Capitalism contains the first widely-read argument for school vouchers presented in terms of market-style "choice."

This is the mainstream argument you'll hear these days for school vouchers: creating a market for schooling will improve education by leveraging competition. Friedman asserts that this is also the best way to address school segregation: the market will reward producers who establish integrated schools, and it will reward consumers -- in other words, parents -- who choose those schools.

Of course, time has shown that Friedman was dead wrong about this. But his market-based arguments have still had a profound effect on the way we talk about school choice: by hiding behind the rhetoric of the free market, voucher proponents can erase any of their ulterior motives, including segregation and "Kingdom gain."

Which raises an interesting question regarding vouchers: Have the school "choice" programs already in place -- programs that exist in part thanks to the efforts of Betsy DeVos -- led to "Kingdom gain"?

Let's go to the data. I'm relying here on the National Center for Education Statistics' Private School Universe Survey (PSUS). There are a few cautions I have to note: first, the latest survey data is from 2011-12. I wasn't always able to get the names of schools in the various voucher programs we'll look at for the same year; the best I could do is match the schools that were in the PSUS for the closest year that I could find a list of participating schools. Which means I might be missing some schools that were part of the voucher program in 2011-12, or I'm relying on data from the PSUS that's earlier than I can confirm a school's actual participation.

That said, I think we've still got a fairly good picture of what private voucher schools look like in terms of their religious affiliation for several of the largest voucher programs in the nation. Let's start with Indiana, which is the likely model for a Trump/Pence/DeVos school "choice" plan. 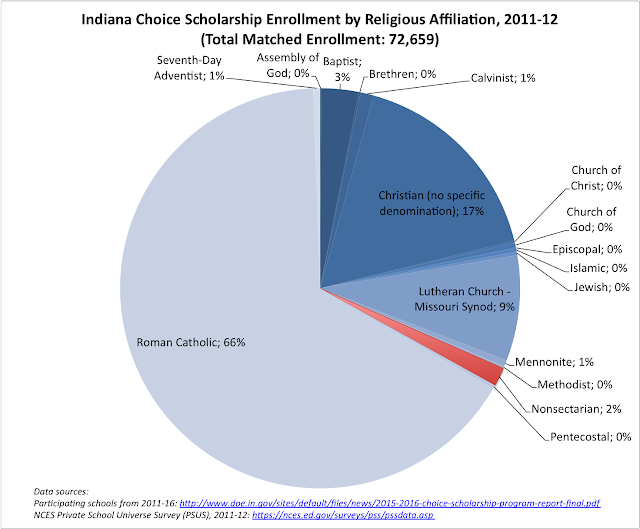 Over 97 percent of the voucher schools in Indiana are affiliated with a Christian religion. Only a tiny fraction of enrolled students attend a nonsectarian school (I could only match 7 schools to the NCES data). 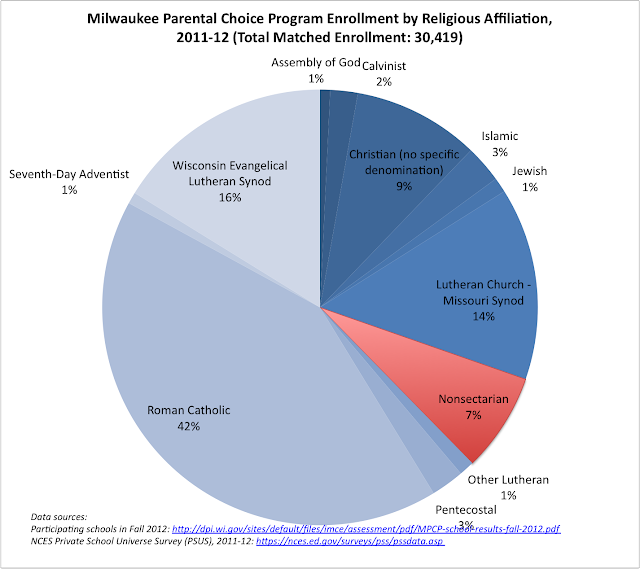 Nearly 9 in 10 students enrolled in a Milwaukee "choice" school get a Christian education. The nonsectarian schools are represented a little better here, but not by much. 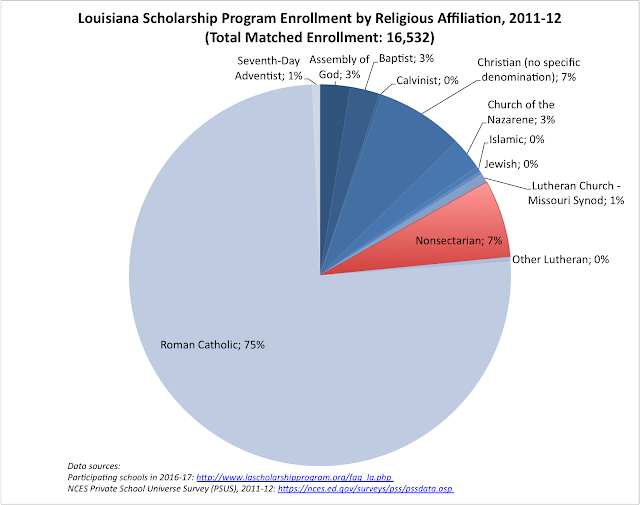 More than 9 in 10 students attending a Louisiana "choice" school are enrolled in a Christian school. Again, the nonsectarian schools are only a small fraction of the total number of schools participating. Even in the nation's capital, the vast majority of students attending a "scholarship" school are enrolled in some sort of Christian school.

A few things to consider about all this:

- First, there is good reason to believe that at least some of the families that are "choosing" private schools are doing so for religious reasons. In most of these areas, there hasn't been a big growth in nonreligious schools to meet market demand.

- Which means it's quite likely these families would have "chosen" private schools anyway. So taxpayers aren't necessarily just shifting costs from public schools over to private schools; very likely, if the vouchers were discontinued, they wouldn't be paying for the public school education of many of the students who now receive vouchers. Which means it's quite likely a big expansion in school vouchers will actually costs the taxpayers more than they currently spend on schooling.

- The Catholic church is, by far, the biggest recipient of school voucher monies. But, given its decline in vocations, it's questionable whether the church could sustain a large growth in enrollment without access to more clergy to teach and administer in its schools.

Certainly, evangelicals like the DeVoses have had tricky relations with Catholics over the years. But even if we separate Catholic schools from other Christian denominations, it's clear those other schools have done well under the voucher schemes already in place. Unquestionably, churches will be the biggest beneficiaries of any new, national school voucher program.

In Zelman v Simons-Harris -- the 5-4 decision that found school vouchers are constitutional -- Chief Justice William Rehnquist wrote for the majority:

“In sum, the Ohio program is entirely neutral with respect to religion. It provides benefits directly to a wide spectrum of individuals, defined only by financial need and residence in a particular school district. It permits such individuals to exercise genuine choice among options public and private, secular and religious. The program is therefore a program of true private choice. In keeping with an unbroken line of decisions rejecting challenges to similar programs, we hold that the program does not offend the Establishment Clause."

But in his dissent, David Souter points out the majority is engaging in nothing more than "formalism":

“If regular, public schools (which can get no voucher payments) participate in a voucher scheme with schools that can, and public expenditure is still predominantly on public schools, then the majority’s reasoning would find neutrality in a scheme of vouchers available for private tuition in districts with no secular private schools at all. Neutrality as the majority employs the term is, literally, verbal and nothing more.”

In other words: When voucher supporters claim they are offering "choice" to families, but the vast majority of the "choices" are religious, it's simply disingenuous to claim that the government is not using public funds, through school vouchers, to support churches.

If DeVos, or Pence, or Trump, try to weasel their way out of acknowledging this reality over the next several months, they should be called out on it -- hard. The plain truth is that Betsy DeVos's beloved school vouchers are going to get her exactly what she wants: "Kingdom gain" at the expense of the American taxpayer. 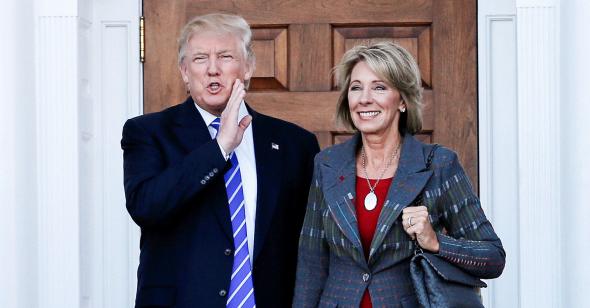 "Again I tell you, it is easier for a camel to go through the eye of a needle than for a rich person to enter the kingdom of God." - Matthew, 19:24.