Over the past month I've been telling the story of the misogynist rapper Pitbull, his new charter school in Miami, and his speech before the 2013 National Charter Schools Convention. I pointed out that Kevin Chavous, board chair of the very reformy group Democrats For Education Reform, apparently both embraces the values espoused by Pitbull in his music and the business practices of Pitbull's partners: 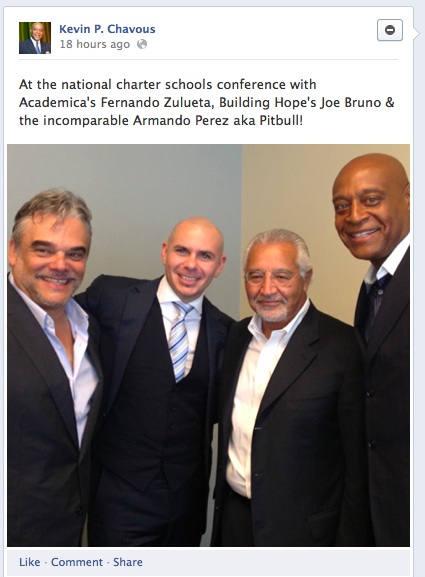 This capture from Chavous's Facebook page features Fernando "Ferny" Zulueta, the man to Pitbull's right. According to a series of reports by the Miami Herald, Zulueta runs the "richest charter school management firm" in Florida, Academica, a for-profit company with annual revenues of $158 million. Zulueta also controls, along with his brother, Ignacio, more than $155 $115 million of South Florida real estate that is exempt from property taxes as "public" schools.

Pitbull's new charter, SLAM, will be managed by Academica.

The fourth fellow in this picture is S. Joe Bruno, a man who has become increasingly influential in the charter school industry. Originally an executive in the accounting and health care sectors, Bruno started his current organization, Building Hope, in 2004. Here's how the non-profit describes its mission:

Building Hope supports high quality public charter schools in Washington D.C., Florida and other U.S. cities and states by providing technical and financial assistance for educational facilities. A non-profit organization, Building Hope supports the expansion of academically successful schools with the capacity to grow their enrollments in order to catalyze change across their local public education systems. Building Hope promotes school-centered community revitalization, and believes that excellent charter school programs and facilities will help transform economically depressed neighborhoods into places where children will thrive. [emphasis mine]

All that may be true, but it's not the complete story. Because Building Hope is also using government grants and tax-exempt foundation funds to provide capital to the for-profit charter sector, allowing charter management organizations and charter school landowners, like the Zuluetas, to maximize their profits.

Thanks to Joe Bruno, Ferny Zulueta has been able to use capital, ultimately subsidized by taxpayers, to increase the capacity at his charter schools and collect more in both management fees and rent. Here's how this plan works:

Step 1: Bruno Gathers Up a Big Pile of Money

Like a bank, Building Hope lends out funds to charter schools to help finance construction and expansion. But Building Hope needs to gather up capital to loan out to its customers. Because they are a non-profit corporation, Building Hope has access to reserves normal lenders can't tap into. Building Hope's website lists several "Investment Partners":

That is a lot of money; some in grants, some in loans, but all bequeathed under the idea that charter school facilities construction is a public investment that should be subsidized - either through tax policy or direct giving - because it addresses a societal need. Keep that in mind as we continue.
Step 2: Bruno Repackages These Funds as Loans For Charter School Construction
Looking at Building Hope's tax records, it's clear their primary activity is granting loans to charter schools for facilities construction. In 2010, the group claimed it had financed over $72 million in direct loans, and another $9 million in credit enhancements, since its inception. A list of projects receiving financing includes charters in Washington, D.C. and 13 states.

Building Hope also gives grants, but many are listed as "imputed interest": the difference between the rate of the loan and the rate Building Hope ostensibly could have gotten on the market. Standard accounting practices allow the group to claim imputed interest as a grant distribution; however, a look at Building Hope's tax return from 2011 shows that there is significant variation in the rates they charge. One of the highest rates reported is a $3.2 million note issued to "Doral Academy I" in 2011; the rate is 7% in the first four years, and a whopping 12% in years five and six.

Building Hope also claimed income in 2011 of nearly $2 million for providing "professional services" to charters; they describe that work as "accounting and IT services."
Step 3: Charter Operators - Including FOR-PROFIT Operators - Build Facilities On Land They Own

This is the part of the plan that gets a little trickier to follow. The only reference to the Doral Academy loan I could find on Building Hope's website is this:

That doesn't tell us much about Doral Academy, or how the loan was used. Let's take a closer look:

As the Miami Herald reported in their blockbuster series, Cashing In On Kids, Doral is one of four networks of charter schools in South Florida managed by Academica, a for-profit company led by the Zulueta brothers, Fernando and Ignacio. As the Herald reported, the Zuluetas don't just provide "management services" for their client charters:

But the Zuluetas’ greatest financial success is largely unseen: Through more than two dozen other companies, the Zuluetas control more than $115 million in South Florida real estate — all exempt from property taxes as public schools — and act as landlords for many of Academica’s signature schools, records show.

IRS records, filings with the Florida Department of State, and financial audits from the Florida Auditor General confirm Doral Academy schools do, in fact, rent facilities from School Development, LLC, a company also controlled by the Zuluetas. 2011 tax records show Doral Academy, Inc. paid nearly $3 million in rent to the Zuluetas; however, the schools also paid over $900,000 to Carlos Albizu University, home of Doral Academy Elementary.

So it's hard to say, based on public records, just how the loan from Building Hope may have been used to enhance the properties controlled by the Zuluetas. What is clear is that the schools have been expanding, and a big part of that expansion has been the construction of new facilities. The school's newspaper described a new building project in 2011 that would accommodate an additional 800 students. Clearly, Building Hope's financing helped make that new building - a building sitting on property owned by the Zuluetas - a reality.

Step 4: The Taxpayer Foots the Bill

As "public" schools, the charters in the Doral network receive taxpayer funds for each child they enroll. According to Doral Academy High School's 2012 audit, Academica receives a $450 yearly management fee for each student enrolled. That makes expansion a good deal for Academica: more students, more fees.

Fernando Zulueta, whose firm, Academica, manages more than 60 charter schools in South Florida, said any employee who denied access to a student with disabilities would be fired. He said special needs students rarely apply to Academica­ managed schools because they are better served at private schools that take McKay scholarships, state funding that helps children with disabilities attend private schools.

“We want to serve them,” he said. “We haven’t gotten there yet.” [emphasis mine]

I'll be taking a look at the student populations of Miami's charter schools later this summer; for now, let's just say that Zulueta admits his student population does not include many special needs students, which would keep his costs down.

So that's how this system, set up by Bruno and the Zuluetas, works. To make it all a little easier to follow, here's a flowchart: 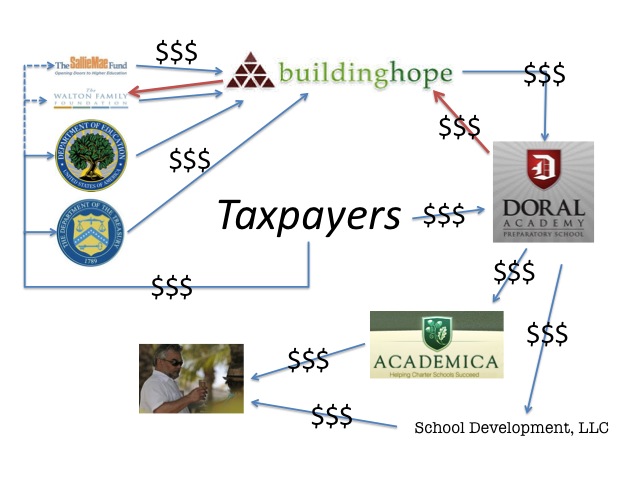 Taxpayers directly fund grants to Building Hope through the Departments of Treasury and Education, and indirectly through the tax code, which allows the Sallie Mae Fund and the Walton Family Foundation to donate as non-profit organizations. Keep in mind that the Walton Foundation will get back all the money it loans Building Hope, and list any imputed interest as a grant.

Building Hope then loans millions to Doral Academy, which pays back the loan using the funds it collects for each student, courtesy of Florida's taxpayers. As the student body grows, more fees go to Academica to manage the school. And rental fees flow to School Development, LLC. Both groups are controlled by the Zuluetas.

Let me stress something here (and keep in mind that I'm not a lawyer nor an accountant): as far as I can tell, every transaction here is perfectly legal.

Once again, from the Miami Herald:

PARADISE ISLAND, Bahamas On a sun­drenched weekend in September, a group of South Florida charter school principals jetted off to a leadership retreat at The Cove, an exclusive enclave of the Atlantis resort. A Friday morning meeting gave way to champagne flutes, a dip in the pool and a trip down a waterslide. The evening ended at the casino.

Leading the toast by the pool: Fernando Zulueta, the CEO of Academica Corp., which manages the principals’ schools.

Zulueta had reason to cheer. During the past 15 years, Zulueta and his brother, Ignacio, have built Academica into Florida’s largest and richest for­profit charter school management company, and one of the largest in the country. In Miami­Dade and Broward counties, Academica runs more than 60 schools with $158 million in total annual revenue and more than 20,000 students — more pupils than 38 Florida school districts, records show. [emphasis mine]

Let's be frank: the United States is full of examples of private companies growing fat off of the public trough. Academica is, in many ways, no different than Halliburton or General Electric. The real question is whether the nation, and Florida in particular, is getting enough value out of these transactions that they justify the large profits the Zuluetas enjoy.

Also: while we can debate the relative merits of charter schools, one thing is quite certain: any notion that the charter industry is "all about the kids" needs to be dismissed, because there are adults who are clearly making a lot of money off of charter expansion. And it's not just people like the Zuluetas: Bruno himself, according to Building Hope's 2011 tax return, earned $388,709 in compensation and another $56,865 in benefits for a year's work. In contrast, the average Florida teacher salary is $45,723.

When Chicago's public school teachers went on strike, DFER's Kevin P. Chavous, the man who posted the picture above, wrote a piece where he questioned whether those teachers were putting the best interests of their students first:

In essence, teachers are striking over salary issues, work hours and teacher evaluations. I agree that many of our teachers are underpaid and I have always respected the collective bargaining process and the right to strike, but I have to agree with the Mayor Rahm Emmanuel on the need to upgrade or elevate the discussion on what collective bargaining for teachers means in 2012 as opposed to 1962.

In nearly every aspect of education in America, strangely, the interests of children are always secondary to the interests of adults. All of the major education decision-makers instinctively weigh adult considerations before thinking about the impact on kids and their academic achievement. Just as the auto industry in Detroit refocused their priorities from their workers' interests to improving the quality of their cars, we must also shift the paradigm to achieve effective outputs and deliverables for kids. [emphasis mine]

Zulueta and Bruno, however, are wealthy men who have been made wealthier by the charter school "movement." It strikes me as more than a little hypocritical that Chavous is so quick to question the motives of public school teachers, but not the motives of men who are making piles of money from charter school construction, with financing subsidized by the American taxpayer. 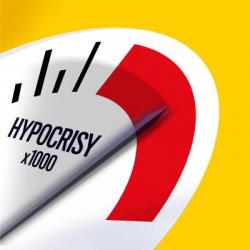