I just noticed that the controversial teachers contract in Paterson, NJ was approved by the local union by a slim margin:

PATERSON — By a narrow margin, the Paterson teachers’ union has approved its new labor contracts, but some members question the way the voting was conducted, saying not everyone got a chance to cast a ballot.

About 53 percent of the votes were in favor of the two contracts and 47 percent opposed. The union had been without a contract since July 2010.

Teachers and other staff members covered by the Paterson Education Association (PEA) originally had been scheduled to vote in person on the contracts last month, while school was still in session. But the union decided to delay the vote, saying members lacked all the information they needed about the proposals.

Instead, the voting was held last week and conducted through email and conventional mail because schools were closed, said union president Peter Tirri. The contract for 2011-2014 was passed by a vote of 1,142 to 1,023, while the contract for 2015-2017 was passed 1,142-1025. About 80 percent of the votes were cast electronically and the rest with the United States mail, according to numbers provided by Tirri.

The union represents about 3,300 people and has about 2,800 voting members. [emphasis mine]

There is some controversy within the membership about the vote -- but's that's only because it was so close:

Many teachers were unhappy with the new contracts because they did not boost the base pay set up on the salary guide. Union members also said the new contracts undermined the practice of giving extra money to teachers who obtained advanced degrees and that the retroactive pay is less than what they would have received under the old contract.

[President of the PEA, Peter] Tirri has said the New Jersey Education Department, which handled negotiations for the state-controlled school district, made unconditional contract demands that the union had little choice but to accept.

There are a few things I don't do on this blog, and one is criticize teachers for accepting contracts that pay them far less than they are worth. Like many New Jersey teachers these days, I know what it's like to have to work year after year without a raise while Chris Christie's betrayals on benefits eat up more and more of my take-home pay. The truth is, when you make mid-five figures, a few hundred dollars makes a big difference -- especially in district like Paterson, where teachers have been working without a contract for four years.

So I won't ever fault the members of the Paterson Education Association who voted to ratify this agreement: it's not fair for someone like me to tell them they have to continue working without a contract when I don't have a dog in the fight. I will, however, point out what I believe are the flaws in the agreement for the benefit of other locals that are currently in negotiations. And there is one big problem with this contract that really concerns me, and ought to concern every other teacher in New Jersey:

This is the second recent teachers contract in New Jersey that enshrines merit pay -- a failed education policy that does not improve student achievement.

A few years ago, the state insisted on a merit pay scheme in Newark, fueled by the Mark Zuckerberg donation. In its first year, that system has revealed itself as a scam: the state-controled district has paid out far less than it promised in bonuses, and more teachers who opted out of the merit pay pool turned out to be "highly effective" than those who opted in.

Granted, the Paterson contract is different. I have a copy of the agreement a reader sent me; if this is still the final deal, the clause that concerns me is on page 8:

For those of you who don't know much about this: a step on a guide is basically a raise. Usually, a teacher moves up one step for each additional year of service, eventually reaching the "top of the guide," or the highest step (a typical contract will have around 15 to 20 steps, but that varies widely).

So advancing two steps is equivalent to getting a raise in one year that would normally take you two. That's a good deal for the teacher who gets a good rating, but it does beg the question:

How will the Paterson School District decide which of its teachers are "highly effective" and, consequently, will get an additional bump in pay?

This is a critical question, but it isn't addressed within the contract I'm reading. How many teachers will get the bump? Five percent? Ten? One? It seems as if the district can pretty much decide how many teachers will get these extra raises first, then determine how they will distribute the money. If they decide they can't afford the pay raises one year, all they have to do is say, "No one is highly effective," and that's that.

And given the arbitrary and capricious nature of New Jersey's teacher evaluation system, it will be easy to rig the results. AchieveNJ (code name: Operation Hindenburg) sets cut points for determining the rating a teacher receives that are based on nothing more than the whims of the state. Given that 80 percent of most teachers' ratings are determined by administrator observations, it's fair to say that the raises in Paterson will be given almost entirely at the discretion of PEA members' superiors.

And teachers in tested subjects will now be motivated to lobby their principals for class rosters that help them get higher Student Growth Percentile (SGP) scores. The biases in SGPs at the school level are now well-documented; there's every reason to believe teachers can change their scores by changing the composition of their classes. Now that they have a financial incentive, why would teachers in tested subjects want more special education or at-risk children on their rolls?

Tying pay raises to a flawed teacher evaluation system is a very bad idea.I'm not sure Paterson can do anything about it at this point, but every other local in New Jersey needs to understand the dangers involved in allowing the merit pay virus to spread. 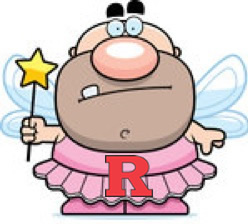 The Merit Pay Fairy says: "First Newark, then Paterson, then your school district! It's how I roll!'

ADDING: I woud really like to hear from Paterson's teachers about this. Leave your comments below.