Leonie Haimson tells us that Reformy John King, New York's Education Commissioner, is so scared of continuing parental outrage at his test-obsessed policies that he has to basically turn his "listening tour" into a scripted political rally:

The Brooklyn stop on Commissioner King's "listening tour", as described here,  featured one of the few friendly audiences he has faced, overwhelming supportive of the state's agenda of Common Core and high-stakes testing.  Many parents were brought in early by StudentsFirstNY, given a special room inside Medgar Evers College and allowed to sign up for 44 of 45 speaking slots by 5:30 PM, even though NYSED had said the doors would not be open till 6 PM.

The attendees praised the state’s policies and the Common Core in similar terms, while apparently referring to a printed sheet of instructions, according to this Epoch Times article, and held up nearly identical signs.  The article also reveals that many of the teachers at the Brooklyn event were from the Uncommon chain of charters, which King himself used to run. Coincidence?

While King had accused critical audiences he faced elsewhere as having been manipulated by “special interests”, he said he saw no special interests at work in Brooklyn. [emphasis mine]

Leonie then posts this photo from the rally (annotation mine): 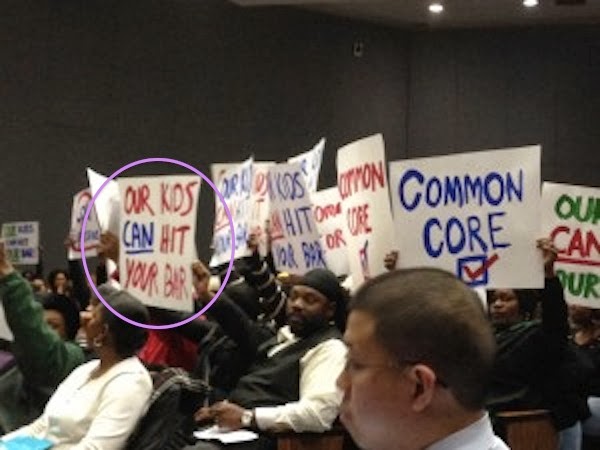 Aside from the ridiculous "home-made"uniformity of the signs, check out the saying: "Our kids can hit your bar."

Um, as I understand the metaphor, we want the kids to clear the bar - you know, like high jumping? So  we really don't want them to "hit" the bar, do we? Unless the sign means "hitting the bar" as in: "Hey, let's go hit the bar and get a couple of cold ones!" Which, I think we can all agree, is not really something we want the children of New York doing...

Michelle Rhee's book was a miserable commercial failure. The astroturfing of her group, StudentsFirst, is laughably transparent. She's managed to alienate large segments of the Democratic Party, her ostensible base. She has missed her stated fundraising goals by an embarrassingly wide margin. Her response to the Sandy Hook tragedy was achingly tone-deaf. Her silence in the face of the Washington test cheating scandal has been disturbing. The research StudentFirst puts out is cringe-inducingly inept. She can't get even the most basic facts about education research correct. She can't even answer a straight criticism from a student. She even chickened out of a debate with Diane Ravitch.

And now we find that the New York branch of her group can't even stage a rally without looking like a bunch of pre-scripted chumps.

Michelle Rhee is really, really bad at her job. One of these days, her funders might actually figure that out. What happens then? 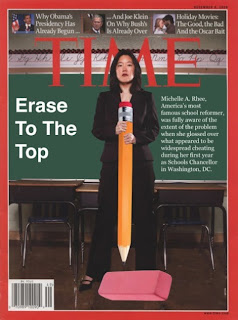 Well, she could always go into eraser sales...