In the 21st century conception of religious liberty in the US, we've been learning two things:

1) You can't practice your religion unless you are fully subsidized by tax dollars.

3) "Your religion" actually means "your particular brand of christianism"

We know that the private schools being funded by public dollars discriminate. We know that SCOTUS has now reaffirmed that "right" multiple times (try here or here)

We know all that. And here we go again. 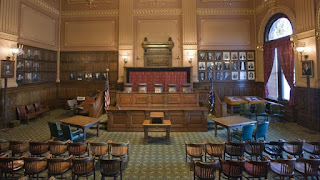 This week, the Indiana Supreme Court ruled that the Roman Catholic Archdiocese of Indianapolis cannot be sued by a teacher who was fired, per the archdiocese command, from a teaching job at a Catholic high school. His firing was because he was in a same-sex marriage. The case has spent some time bouncing around before hitting the state supreme court.

Joshua Payne-Elliot married his husband in 2017. The archdiocese in 2019 forced all Catholic schools in its control must fire any such employees (Payne-Elliot's husband was also canned under the edict after his school put up a fight to retain him); the school had actually renewed Payne-Elliot's contract three times after becoming aware of his relationship. Payne-Elliot had taught world languages and social studies at Cathedral High School for 13 years.

The decision rests on the church autonomy defense (and so never gets to talking about freedom of expression or the ministerial exceptions) and quotes several precedents. Justice Slaughter's opinion opens with one such quote:

Religious freedom protected by the First Amendment to the United States Constitution encompasses the right of religious institutions “to decide for themselves, free from state interference, matters of church government as well as those of faith and doctrine.”

“No power save that of the church can rightfully declare who is a Catholic. The question is purely one of church government and discipline, and must be determined by the proper ecclesiastical authorities.”

Which would seem to underline the idea that a Catholic school is more about being Catholic than about being a school. Which--well, they've said that before. Back in 2012, when the archdiocese was quite excited about the new voucher program, there was this in a Catholic Review article:

“Vouchers will not change the mission or purpose of our Catholic schools,” said Ron Costello, superintendent of Catholics schools in the Archdiocese of Indianapolis. “Parents who enroll students in our schools need to understand that we are Catholic first and schools second.”

Nevertheless, a story in the archdiocesan newspaper of Indianapolis reported that most of the Catholic schools in the archdiocese were "committed to participating in the state's voucher program."

It's all about the separation of church and state, you see:

“This is really important example of properly having separation of church and state properly understood, because when you have an archdiocese or some other church body, giving instruction and guidance to a religious school, that’s one of its ministries,” Luke Goodrich, vice president and senior counsel at the Becket Fund for Religious Liberty, told the Daily Caller News Foundation. “It’s very important for it that the government doesn’t insert itself into that dialogue and relationship between the church and its ministry and the way it’s working out its faith and living its faith in its religious schools.”

Government is, however, cheerfully invited to insert its money into the relationship between the church and its ministry.

This is where we are on voucher policy. Give us your money, and leave us alone so we can treat people as well or poorly as we wish.

Indiana's program had stalled, but like many others, experienced a pandemic expansion. The expansion has also been fueled by Indiana's steady relaxing of its rules. Originally started as a program to rescue poor children from failing public schools, the program will now offer vouchers to a family of five making $172,000. Students no longer have to have ever set foot in a public school. And the fact that voucher schools are no better (and possibly worse) than public schools isn't bothering policy makers, either. And now we go from little regulation and oversight to actually forbidding any regulation or oversight.

Should Catholic schools be able to run as the church wishes them to be run? Sure. Should the taxpayers foot the bill for that private enterprise? Nope. I can hope that this case will keep wandering upward through the courts, but there's virtually no reason to hope that SCOTUS would decide against the archdiocese or insist there be limits to the church's freedom to openly discriminate on the taxpayer's dime.