The "reform" movement is going all in with yesterday's test score releases in New York State:

Across the city, 26 percent of students in third through eighth grade passed the state exams in English, and 30 percent passed in math, according to the New York State Education Department.

The exams were some of the first in the nation to be aligned with a more rigorous set of standards known as Common Core, which emphasize deep analysis and creative problem-solving.

City and state officials spent months trying to steel the public for the grim figures, saying that a decline in scores was inevitable and that it would take several years before students performed at high levels. Under the old exams last year, the city fared better: 47 percent of students passed in English, and 60 percent passed in math.

Statewide, 31 percent of students passed the exams in reading and math. Last year, 55 percent passed in reading, and 65 percent in math.

Carol Burris has written what I believe is the definitive analysis of what all this means. Read the entire thing, but let me focus particularly on this:

What is equally disconcerting is that these reforms are being pursued with little or no evidentiary grounding. There is, for instance, zero sound research that demonstrates that if you raise a student’s score into the new proficiency range, the chances of the student successfully completing college increases. New York’s new cut scores are an attempt to benchmark state scores to the proficiency rates attached to the National Assessment of Educational Progress, or, NAEP. Yet the connections between NAEP scores and college performance are so spurious that researchers have yet to claim that NAEP scores have any predictive value at all when it comes to college and career readiness.  In addition,  the NAEP proficient level is very high, not at grade level at all.  In fact, most analysts consider the NAEP Basic level to be at grade level.  You can read about the problems with using NAEP as a benchmark here. [emphasis mine]

Would anyone think the head coach was doing anything to help the high jumpers or their coach by arbitrarily changing the "standard" for his high jumpers like this? Would it at all affect the team's record or performance in actual track meets? Would his criteria for success let us know how high each boy actually jumped, or how well they responded to coaching? Would it tell us anything about the high jump coach's ability to get the best out of his athletes?

Andrew Cuomo and John King and Merryl Tisch and all the other grand Pooh-Bahs of New York have decided to arbitrarily shift the definition of "proficiency" for New York's kids.There is no evidence that this will affect their ability to learn in the slightest, just as there's no evidence yelling at a high jumper: "Jump higher!" will actually raise his altitude. This entire exercise is pointless: it's not like this new data tells us anything we didn't already know.

So why are they doing it? Why are the reformies, including SecEd Arne Duncan, insisting this arbitrary change is helpful? What do they hope to gain? Let's ask one of the foot soldiers in the reformy crusades, Andy Smarick:

In the spring of 2015—assuming that the two testing consortia hold together—states will administer the first round of Common Core–aligned assessments. If those tests end up true to their billing (meaning they are accurate predictors of college- and career-readiness), proficiency scores across the land will plummet (see today’s very good editorial from the NY Daily News and this WSJ piece on a boycott-threat in New York).

When those scores are publicly released in the summer of 2015, lots of parents are going to be looking for solutions. The reform community should have a response.

Unless there’s a clear playbook for how we should respond, the vacuum will be filled by excuses (The tests are wrong! Everything is fine!) and old, ineffective, but popular and establishment-friendly interventions (More spending! Reduce class sizes!).

If I were a state chief, I’d have a team, off to the side, working on this right now. We would be drafting new policies, working on communications plans, and much, much more.

The reform community has a well-known tool-kit for our most distressed schools. But a counterpart for our suburban schools is conspicuously missing.

Folks will be looking for answers soon. [emphasis mine]

This isn't just mere speculation on Smarick's part: he was the New Jersey Deputy Commissioner of Education under Chris Cerf, one of the reformiest of the reformy. Smarick has been in on the game for years, and it's clear what the goal is: to sow seeds of doubt outside the big urban districts about public education itself. Hell, even Cerf admitted he was doing just that in New Jersey this past year with his revised school "report cards":

State Education Commissioner Chris Cerf – who acknowledged the reports have mistakes — has made overhauling their format a major project in his efforts to improve schools. While he intends to intervene aggressively in failing schools, he said parents, boards and superintendents elsewhere should use this data to find ways to address weaknesses in their districts.

Some schools may have to grapple with unpleasant surprises. This data “will make clear that there are a number of schools out there that perhaps are a little bit too satisfied with how they are doing when compared with how other schools serving similar populations are doing,” Cerf said. [emphasis mine]

Grading schools on proficiency rates helps in this endeavor, because they are not designed as metrics of school efficiency and can be easily spun. It also helps when the tests are secret, which keeps the public from vetting them. Add in a complex "report card" system like Cerf's, or an easily manipulable  A-F system like Tony Bennett's, and you've got all the pieces in place to make the case that good schools are actually lousy.

And once you do that, the sky's the limit! Good-bye masters bumps, step guides, tenure, and teachers unions; hello Merit Pay Fairy and crappy wages and benefits! You can bring "choice" to the suburbs and even rural areas, thanks to "virtual" charter schools. The privatizers, who aren't even trying to conceal their profit motive anymore, can implement all their reformy plans to move public revenue away from public schools and toward private contractors, just like in our incredibly inefficient health care and national security sectors.

The key is to sell the case to the American public that public schools are a uniform disaster and only privatization and de-unionizing the teacher corps can "fix" our education system.To do that, the test scores must show America's children are failing. But the payoff is so potentially large that it's worth it to these people and their patrons to make radical, incoherent changes like yesterday's.

It's completely contradictory to tell the parents of New York State that this new system is more "accurate," and then within the same breath tell them not to worry that their child, who was doing well before, is now failing. That these people are willing to stand up in front of the public and display such addled thinking tells us how badly they want to make the case against public schools; they are willing to risk looking like buffoons to get what they want.

Maybe that's a function of how little regard they have for the public: they actually think people are going to passively accept this nonsense. But I'll predict they are about to experience the politically perilous consequences of telling parents their kids suck.

More on this in a bit. 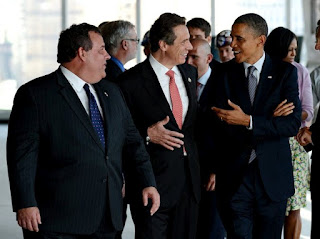 Guys, let's keep telling America's parents how much their kids suck! People will LOVE that!