Jersey Jazzman: @NJSBA and PARCC: Going Along to Get Along?

The resistance to the PARCC -- the new, standardized, computerized tests being administered in New Jersey beginning this month -- continues to grow. Parents, teachers, and students are rightly concerned that these tests are taking too much time, are unnecessarily complex and confusing, disadvantage students with less access to technology, and narrow the curriculum.

In response to the grassroots movement to opt students out of the PARCC, a coalition has formed, consisting of various education stakeholder groups across the state. We Raise New Jersey includes the NJPTA, the Principals and Supervisors Association, the New Jersey Chamber of Commerce, the New Jersey Council of County Colleges, JerseyCAN, and the New Jersey School Boards Association (NJSBA).

I find this list to be very interesting. As my blogging bud Darcie Cimarusti points out, the national PTA has received millions of dollars in funding over the years from the Gates Foundation, the principal driver of the Common Core standards to which the PARCC is aligned. JerseyCan also gets funds from Gates, among other reformy groups.

But it's the NJSBA that really caught my attention. This is a group that is supposed to serve school boards across the state. And yet the PARCC is clearly an unfunded mandate from the state on local school districts, draining resources away from operations and toward the administration of tests. This is especially onerous for local school districts who have had to upgrade their computer networks, yet received no additional funding from the state.

Perhaps because the NJSBA itself is an unfunded mandate.Let's go back to 1997, when the funding of the NJSBA was a source of contention:

For more than 80 years, state law has required every school district in the state to be a dues-paying member of the New Jersey School Boards Association. But that could change with the passage of a bill pending in the state legislature that proposes making membership in the statewide organization voluntary.

The suggested change has stirred some controversy over which setup would better serve the state's 1.2 million public-school students. And some school board members are accusing lawmakers of trying to weaken the school boards association as payback for the organization's vocal opposition earlier this year to new education funding laws.

Districts pay an average of $11,700 in annual dues to fund the association's $8.9 million budget. Association advocates say it would cost far more for districts to replicate the services their dues provide. Belluscio said association lobbying efforts have led to legislative changes that have saved school districts hundreds of millions of dollars.

But legislators who support the change say that lifting mandatory membership would force the association to be more efficient and more accountable to its constituents.

If membership were made voluntary, Belluscio said, the school boards association would have to shift resources away from direct services to marketing itself.

But observers say that's not necessarily a bad thing. For the Pennsylvania association, that has meant tailoring services to constituents.

``We've had virtually 100 percent membership over the years,'' said spokesman Thomas Gentzel. ``We like to think it's because we provide a good array of services for our members and we have to be responsive to them.''

And then there's the issue of the possible political motivation behind New Jersey's proposed legislation.

``There has been some talk that this is kind of a payback move,'' said Lindenwold school board member Jim Dougherty. ``There is some discussion that the legislature and the governor are more than a little ticked off because of the position the association took in the funding situation.'' [emphasis mine]

The NJSBA, it seems, has a history of walking on thin ice: piss off the wrong people, and its unusual source of mandatory funding could be put in jeopardy.

Fast forward to 2010, when the NJSBA once again found its mandatory dues questioned:

The New Jersey School Boards Association collects more than $7 million a year from 588 member districts, which are legally required to join. It has socked away so much in dues and conference fees — $12.3 million, an amount greater than the group’s annual operating budget — that it is paying cash for the improvements.

It also paid $1.6 million in cash for 10 suburban acres where it had hoped to build an $18 million conference center. But the board abandoned that plan and put the land back on the market.

The most recent projected cost for the headquarter’s renovations was $6.3 million. But that figure could grow an additional $600,000 to $1 million, as the contractor decides whether to fix or replace the building’s walls of glass windows, officials said. In the meantime, its 70 employees — including five lobbyists paid to influence legislation — are working in leased office space. [emphasis mine]

Remember, this was back in 2010, when local school budgets were being decimated. In those lean times, the practices of NJSBA were not siting well with taxpayers or legislators:

The School Boards Association has come under some criticism in recent months, after The Record reported that its staff is enrolled in the state-run health and pension systems, even though they are not government employees. Workers at two other Trenton lobbying groups — the Association of Counties and the League of Municipalities — also are in the programs, as a result of 1950s legislation that declared they were acting in the public interest.

In all, New Jerseyans will fund retirement payouts and lifetime health benefits for 107 non-government employees with combined pensionable salaries of $7 million. Right now, taxpayers are giving $1.3 million a year to 62 retirees of the groups. Gov. Chris Christie has said the benefits arrangement must end.

Given all this, the NJSBA found, once again, that its funding was under scrutiny:

Last year, New Jersey districts paid $7.6 million in dues — a 73 percent increase from the $4.4 million paid in 1999, according to the association’s financial reports. In 2009, it also had revenue of $2.7 million from conference fees, ad sales and services.

This year, dues will be 5 percent lower, said Frank Belluscio, a spokesman for the association. Each district will receive a $2,000 credit to apply toward services. As a result of the law Corzine signed, the group also has replaced its annual three-day Atlantic City workshop with a shorter program in Central Jersey, which shortens the drive for most participants and eliminates the need to stay overnight at school board expense.

Belluscio also pointed out that many districts get back their dues and then some because of their affiliation with the association’s energy cooperative.

The give-backs to the districts pleased Assemblyman John Burzichelli (D-Gloucester), who in December had proposed making association membership voluntary rather than compulsory. Last week, he said he is withdrawing the bill.

"It seems to me that the service they’re providing is very helpful, especially as we’re going through this transition between potential consolidations, upheavals in school districts and things of that nature," Burzichelli said. "I applaud them for taking the steps they’re taking."

See how it works? Don't make waves, keep legislators happy... and nobody messes with your source of revenue. Win-win. Want another example?

Plug "NJSBA" and "SFRA" into Google. SFRA is the School Funding Reform Act, the state's school aid formula, which has not been fully funded since Chris Christie came into office and is now $6 billion behind what the law dictates. You would think the group that represents local school boards would be apoplectic over the state's repeated refusal to come up with the money its member districts are due.

But the best I could find from NJSBA in the last few years on school underfunding -- a period where inequality between high and low-spending districts has increased rapidly -- was this, from 2011:

“The New Jersey School Boards Association believes in fair and equitable distribution of state aid," said Raymond R. Wiss, president of the New Jersey School Boards Association via release.  "In 2008, NJSBA supported the principles of the School Funding Reform Act, based on the act’s recognition that at-risk students attend schools in communities throughout New Jersey, not just in 31 communities.  The 2008 funding law also attempted to help those middle- and moderate-income communities, which suffer from high property tax burdens and still have been unable to fund their education programs at levels considered adequate by the state.

“Today’s court decision does not resolve these matters,” Wiss concluded.

That is some weak, lukewarm tea -- probably because it's several years old. In fact, some of NJSBA publications on the underfunding of SFRA read, to me, more like apologies for the Christie administration than indictments. And if they've had anything to say lately about the Baconlawsuit, which seeks to remedy the underfunding of rural New Jersey school districts, I haven't been able to find it.

Now, the NJSBA might make the case that lobbying for the full funding of SFRA isn't part of their mandate. OK... then why dive into the debate about PARCC? Why actively lobby and dispense pro-PARCC propaganda with groups like the NJPTA and JerseyCAN? Why take a stand on this issue at all if NJSBA won't even take a strong stand on getting their member districts funding the state itself says they are due under SFRA?

It looks like NJSBA has learned its lesson: if you want to get along, go along. They should embroider it on the pillows in their new offices... 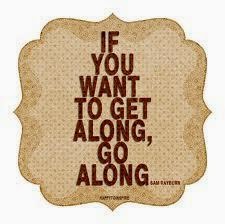 TADDING: The New York State School Boards Association is a plaintiff against the state in a lawsuit for equitable funding. I guess the NJSBA is too busy redecorating to get involved in that fight around here...