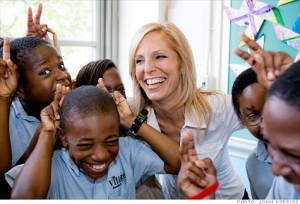 In a typical year, Deborah Kenny replaces half of the teachers at Harlem Village Academy Charter School with teachers who are fresher and more innovative.

Why it seems like mere days ago that EduShyster was leading a tour through the phantasy land that is Education Reform, Inc. Along the way we encountered miracle teachers who dazzled us with their pheats of strength, and miracle students, whose smiling visages light up so many of our favorite #edreform websites. Well reader, imagine EduShyster’s surprise to find one of our phantasy stops—Deborah Kenny’s Harlem Village Academy Charter School—right smack in the middle of the New York Times op-ed page this week.

You see Kenny runs what is best known as a miracle school. A quick review for the public school teachers who were on break when we last visited the topic. The miracle school is just like a regular school only 100 times more innovative and with 1000 times more best practices. Best of all, the miracle school has students that are EXACTLY THE SAME as the students who attend sucky public schools—which proves once and for all that poverty absolutely does not matter. What’s more, the miracle school is typically led by a plucky blonde heroine (check!), is the subject of phawning media coverage (check, check, check!) and continues to receive said coverage EVEN AFTER MIRACLE CLAIMS ARE REPEATEDLY DEBUNKED (check, check!)

Which brings us to the subject of today’s EduShyster tirade. Someone at the Times had the brilliant idea to let Kenny author an op-ed denouncing standardized rating systems for teachers as rigid and profession stifling, while pitying the poor public schools which are prohibited by law from holding teachers accountable at all. Best of all Kenny got an opportunity to trumpet her own unique management style.   Let’s take a look, shall we?

Principals need to create a culture of trust, teamwork and candid feedback that is essential to running an excellent school. Leadership is about hiring great people and empowering them, and requires a delicate balance of evaluation and encouragement. At Harlem Village Academies we give teachers an enormous amount of freedom and respect.

Now that pretty well sums it up—if you add the words “THEN WE FIRE THEM” to the end of Kenny’s quote. In addition to the usual phlaws that plague miracle schools (non-representative students, sky-high attrition) Harvard Village also suffers from UNBELIEVABLE  teacher turnover. In each of the last two years, more than half of the staff has left, replaced by fresher, more innovative teachers. (Shout out to Gary Rubenstein here for his excellent post on just this subject which I am basically repeating word for word).

Some of these teachers have proven more than willing to speak publicly about their experiences working at Kenny’s miracle school. My favorite,  Sabrina Strand, taught at Harlem Village for a year and calls the charter school an elaborate charade and Kenny herself a charlatan.

Deborah Kenny and her Village Academies take advantage of budding teachers, often crushing their spirits in the process. Though we barely made more than NYC public school teachers while working seven weeks over the summer, teaching on multiple Saturdays, and averaging 12-hour work days during the week, Deborah pays herself the HIGHEST SALARY out of any charter school executive in NYC (that stat was recently published in The New York Post). She makes almost nine times as much as her teachers who are doing all the real work, the hard work, that lands her in the press so often and helps her send her own kids to tony private schools. Her “vision” is a bunch of bullshit – basically, work your teachers to death, and you’ll see results. Sure, and you’ll also see a lot of unhappy teachers, and a lot of people leaving your school and vowing to never come back.

Strand notes that the year she left, the entire 5th grade teaching staff left with her. And Strand’s unmasking of Kenny inspired lots of other teachers whom Kenny had churned through to speak up as well. Wrote another: “The teachers who were hired were dedicated professionals who did their best under an inhuman and oppressive system. Students were treated as fundraising tools for the machine that is Deborah Kenny. One amazing teacher was not extended an invitation back to the school after she was quoted in a newspaper article about low teacher pay (among many others). Never mind that her students made the greatest gains on the ELA exam, the only thing that mattered to Deborah was Deborah’s reputation.”

Which brings us to our inevitable and sad conclusion. (EduShyster premium members, today’s featured wine box is Pepperwood Grove Old Vine Zinfandel). The occasion for Kenny’s preposterous op-ed is a nationwide “debate” over accountability and standards for educators. But where is the accountability for charlatans and edu-huckstresses???? How is it that Kenny can continue touting her miracle school even though 75% of students end up leaving Harlem Village Academy along with 60% of the teachers?

In the last two weeks we’ve been forced to endure two New York City edu-hucksters: Joel Klein and now Deborah Kenny. Any bets on who will complete our edu-scam trifecta? Send your guesses to tips@edushyster.com