The maddening Race To The Top continues

Not much for educators to get excited about in last night's speech. It's that time again when Dems give us a slight head-fake to the left-center to keep their base in line. I did like the focus on income inequality and the promise to raise the minimum wage for fed-contracted workers by executive order. That alone has the Republican wing-nuts in a frenzy. They're already crying "coup d'etat" over Obama's tepid moves. I'm also glad about his shift towards diplomacy, rather than saber-rattling on Iran and Syria, but fear it's like promises to end the war in Afghanistan -- lots of talk, lots of wavering, more winks to the generals and the M/I Complex.

I also liked his call for universal pre-K for all 4-year-olds. But there's little chance of that, or much else positive (gun control, immigration reform, etc...) going anywhere with this Congress.

The worst of it was Obama's call for even more standardized testing -- an obvious reassuring bone thrown to his Common Core pals at Pearson, N.Y. Gov. Cuomo, and  the state’s education commissioner, John King who's facing a rank-and-file teacher revolt against CC in N.Y.. That could be the start of something big and even has AFT and NEA leaders nervous.

Mr. Obama gave tacit credit to the Race to the Top grant program for helping states “raise expectations and performance.” In exchange for grant funds, states agreed to put in place evaluation systems that grade teachers in part on how students score on standardized reading and math tests, and to adopt “college and career-ready” standards. Many states used the Common Core state standards to meet that requirement, and their roll-out has been very controversial, with critics on the right claiming they were forced on states by the administration and critics on the left objecting to a renewed emphasis on testing.

AFT's Randi Weingarten is lagging behind her own membership as she flips from outright support for CC to "de-linking" Common Core from testing. My brother, as he's wont to do, turned my comments on that piece of fantasy into art. 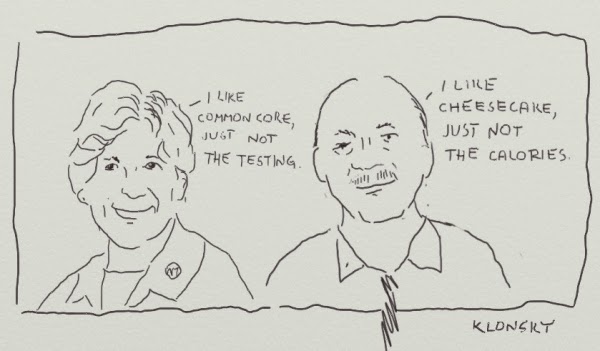 Is that really supposed to be me? I'm much younger than that.

NEA's Van Roekel is even worse. He's been the loudest supporter for Common Core and even claimed secret internal polls showing that his membership overwhelming supported Common Core.

“Our members support the Common Core State Standards because they are the right thing to do for our students and they embrace the promise of the standards: that all students will have access to the critical thinking and creative skills they need to succeed, regardless of where they live.

Pension fight moves to the courts

Got this notice yesterday from my union:

Pension lawsuit filed – Today AFSCME and our partners in the We Are One Illinois union coalition, along with a group of active and retired public employees, filed suit in Sangamon County Circuit Court to overturn pension-slashing Senate Bill 1 (Public Act 98-599), which cuts the pension benefits of all active and retired employees in SERS, SURS and TRS. Defendants in the suit are the state’s constitutional officers, the state retirement systems and their boards. Our suit makes clear that pension theft is not only unfair, it’s clearly unconstitutional.