Jersey Jazzman: Once Again, It's the Poverty, Not the Stupid

Ani McHugh put down the baby for a few minutes and put a couple more corporate education reformers in their place:

I’m not sure whether Dana Egreczky and Melanie Willoughby–co-authors of a pro-PARCC opinion piece published yesterday on nj.com–are parents of children in New Jersey’s public schools, but I do know that they’re not educators: the bio at the end of their piece lists Egreczky as a Senior VP of Workforce Development at the NJ Chamber of Commerce and Willoughby as a Senior VP at the New Jersey Business & Industry Association.

The bio fails to mention, however, that Egreczky is also a member of the Governor’s Study Commission on the Use of Student Assessment in New Jersey.  (How’s that for objectivity? I wonder what Egreczky will contribute to the Commission’s final report–and whether her staunch support of PARCC, including her organization’s membership in We Raise NJ–should preclude her from having input into it. Let’s not forget that David Hespe, Chair of the Study Commission, published a similar defense of PARCC on February 24th. But I digress.)

But even a cursory reading of this piece exposes the many problems that arise when people who have no understanding of the intricacies of K-12 education drive reforms that reshape it–particularly when such reforms are met with overwhelming opposition from parents and educators. Some specific issues:

Ani dispatches our PARCC cheerleaders with her usual aplomb, so I'll leave you to read the rest. I did, however, want to make an additional point:

From Egreczky and Willoughby's piece:

We tend to think that millennials, who currently make up the youngest generation in the workforce, are highly advanced because they grew up immersed in transformative technology. However, this is not the case. According to a new report by the Organization for Economic Cooperation and Development (OECD), millennials in the United States rank near the bottom of all workers around the world in skills employers want most: literacy, practical math and even a category called "problem-solving in technology-rich environments." The report is based on a test designed to measure the job skills of adults, aged 16 to 65, in 23 countries.

Wow -- sounds serious. We can't even compete in "problem solving in technology rich environments"! Never mind that we actually have an overabundance of qualified candidates for many jobs in technology... clearly, Poland is on the march! Bring on the PARCC!

No one has actually shown that the PARCC measures any marketable job skills in students; frankly, we have no idea what predictive validity the PARCC may have.

But we do know that the children in the countries that are "beating" us on tests like the OECD's PIAAC -- the Programme for the International Assessment of Adult Competencies (as reported here by ETS) -- are far less likely to live in poverty than children in the United States: 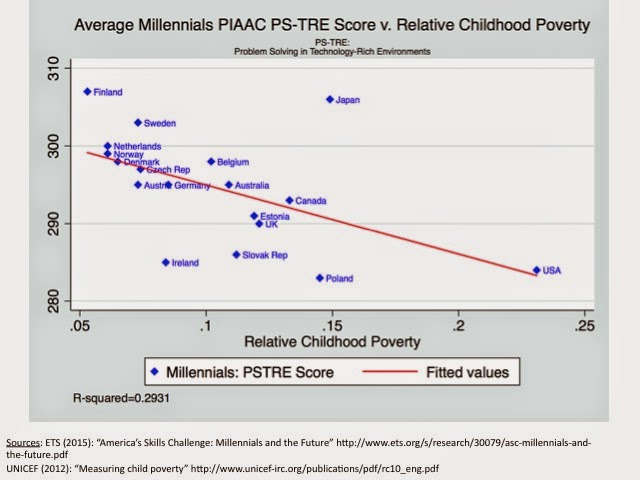 Here are the average scores on the PIAAC's PS-TRE -- the "technology rich environment" test -- plotted on the Y-axis against the percentage of relative childhood poverty for each country, which is on the X-axis.

Look at the red line: see the tilt downward? As a county's childhood poverty rate increases, its test scores decrease.

Finland doesn't give its students tons of standardized tests; instead, according to Pasi Salhberg, the country strives for economic justice, a strong program of human services, and equality of access to education. Finland also treats its teachers like professionals, paying them well, holding them accountable, and allowing them the freedom to teach.

If Egreczky and Willoughby really wanted to bring the USA to educational prominence, they wouldn't waste their time cheerleading for a test no one has ever shown to have any positive benefits for students. Instead, they'd be demanding that the United States lower its disgusting childhood poverty rate, which is clearly having a debilitating effect on our ability to provide equitable education opportunities.

Why don't the mouthpieces for America's business community demand an end to child poverty, rather than the expansion a failed regime of standardized testing?

Why don't these people insist that the United States properly fund programs to end childhood hunger and give all children access to great medical and dental care? Why don't they advocate for living wages? Why don't they insist on a surge of investment in our cities' infrastructures, creating both good-paying jobs and sustainable communities?

The evidence from the rest of the world is clear: poverty matters. Why don't these spokespeople for corporate America acknowledge this simple truth? 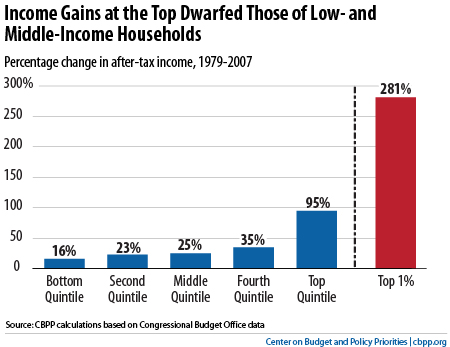 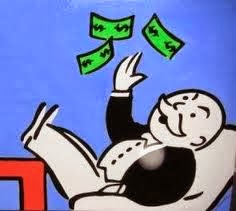