Last week, I released a new brief at the NJ Education Policy Forum about One Newark, the one year-old school choice plan in New Jersey's largest city. I think this subject is important enough -- not just for Newark, but for education policy in general -- that it's worth my doing some wonk-to-English translating here to explain what I found.

A little background: last year, State Superintendent Cami Anderson, over the objections of many, implemented a "portfolio" system in Newark that calls for families to choose from a menu of both charter and district schools. The district's role in this system, called One Newark, is supposedly to be both a facilitator and an impartial arbiter, providing necessary information for families so they can make an informed decision.

As I wrote last year, economic theory suggests that consumers need high-quality information to negotiate a market, and that the state-run Newark Public Schools' role in One Newark should be to provide that information. The district does give both charter and district schools ratings under One Newark: "Great," "On The Move," and "Falling Behind."

The problem is that these ratings are tied to test scores, which have enormous biases against schools that serve more students who are in economic disadvantage, or have special education needs, or have more black students, or who even have more boys. Here's the breakdown on student characteristics and One Newark ratings: 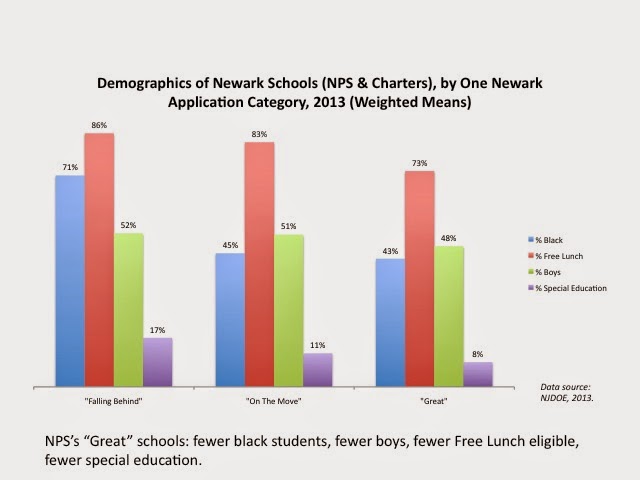 This is, to my mind, the central question in whether One Newark will actually help improve the city's education system: What are Newark families actually "choosing"? Are they opting for "better" schools, or merely schools that have differing student populations?

Bruce Baker* has been on this for a while: see here and here. Given the unequal distribution of both students and resources across Newark's schools, it's both unfair and unhelpful to rate schools by test score outcomes. You can't ask a school with more students in disadvantage to compete with a school with fewer of those students, especially if they don't have similar resources.

And we shouldn't be surprised that schools with less challenging students and better resources are more "popular" in a choice system. In fact, given the preliminary release of the results of the initial One Newark applications, that seems to be exactly what happened. Here are the results released by NPS as reported at NJ Spotlight: 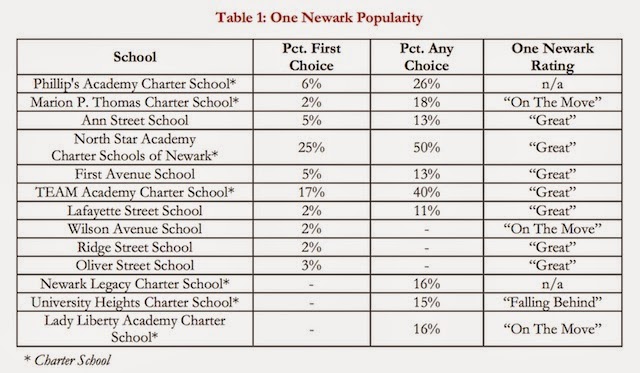 Most popular schools under One Newark are "Great" according to NPS. Again, that shouldn't surprise anyone, as the district has set itself up in the role of a sort of "Consumer Reports" supplier of information to families making school choices.

Let me add a caution here: NPS did not release all of its data on the relative popularity of One Newark schools, so we can't do a full analysis of how popularity correlates to student and school characteristics. This is a preliminary analysis, and the central conclusion I make in the brief is that we need to have all of the data on One Newark if we're going to make a full program evaluation.

That said: we have more than enough here to make an initial assessment. And what becomes clear is that the popular choices, spurred on by NPS, are likely leading to a school system that will be more segregated than it is already.

Here, for example, are the popular schools (marked in red) compared to the rest of the One Newark choices as ranked by their percentages of free lunch-eligible students: 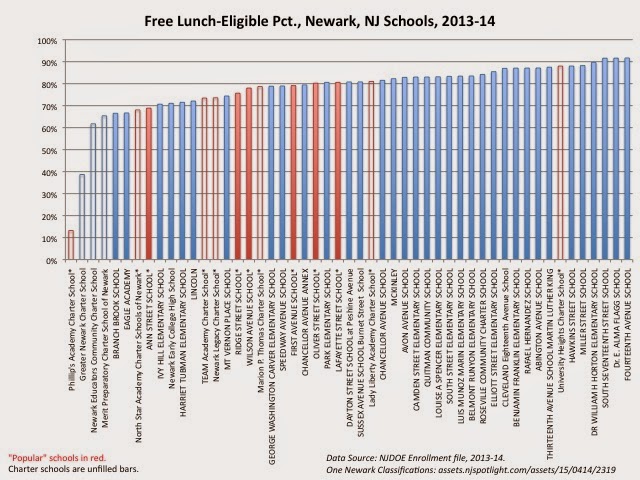 See the trend? The popular schools under One Newark tend to serve fewer students in economic disadvantage. This becomes more obvious when looking at the percentages of students who qualify for reduced price lunch: 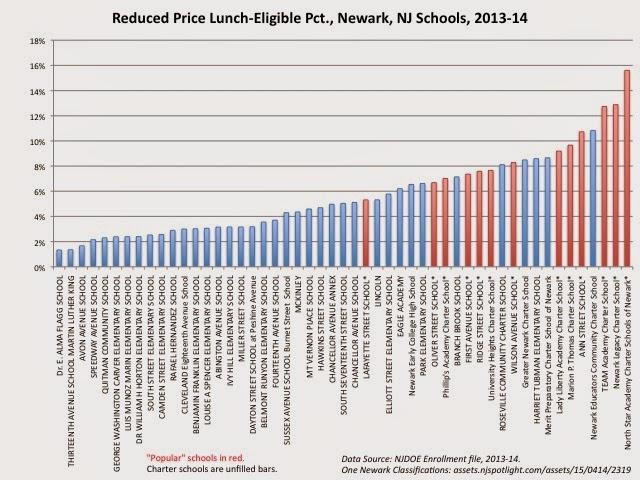 As both Bruce and I have explained time and again: in a district where nearly all students qualify for free or reduced price lunch, RPL is a marker of relative economic advantage. FL families have incomes at 130% of the poverty line or lower; RPL families are at 130% to 185% of the poverty line. That's surely economic disadvantage compared to families who don't qualify at all; however, RPL eligibility is relatively better than FL eligibility.

And it's not just economic segregation: 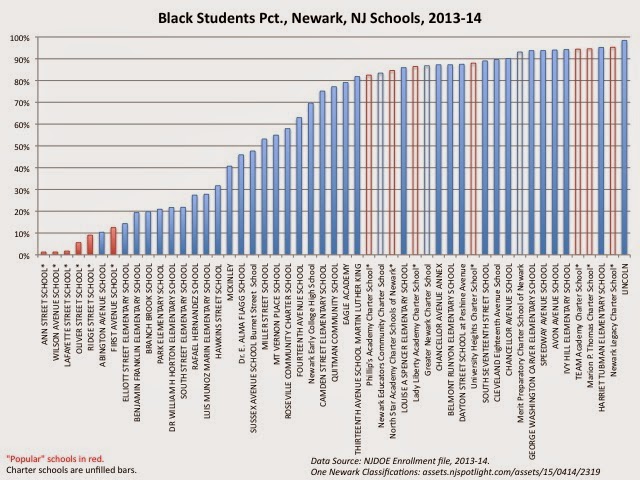 Stop and think about this graph for a moment and you'll realize just how striking it is. All of the popular schools have student populations whose proportion of black students is either above 80 percent or below 15 percent. There are quite a few schools in Newark that are relatively integrated, meaning they have a black student population between 20 and 80 percent. None of these schools, however, are "popular."

Further: all the "popular" charter schools have large proportions of black students, but all of the "popular" district schools have small proportions of black students. Those popular district schools are all in the North and East Wards, where there are relatively high concentrations of Hispanic and white families compared to the rest of the city. One Newark, then, appears to be reinforcing the patterns of racial segregation within the city itself.

To be clear: these patterns are not analogous to the segregation that occurs between New Jersey school districts. This is an intensely segregated state, and I don't mean to suggest for a second that One Newark is contributing at all to this level of segregation. Rather, One Newark seems to be reinforcing a pattern: segregated charter schools for black students, and segregated district schools for Hispanic and white students. Given the very real concerns about the abrogation of students' and families' rights at charter schools, this is a serious issue.

As I said: it appears that test scores are driving the school choices Newark family are making. For example, here are the Grade 8 average scale scores on the NJASK English Language Arts test: 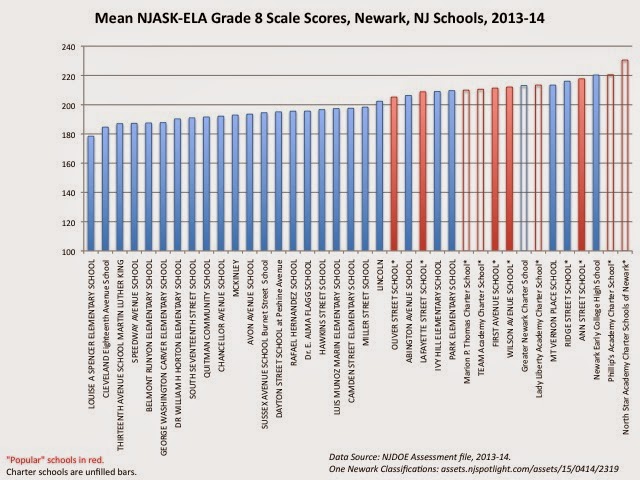 Clearly, popular schools get higher test scores. But these scores are strongly correlated to student characteristics, particularly economic disadvantage. What happens when we judge the schools not by their absolute performance, but by their "growth" in test scores? 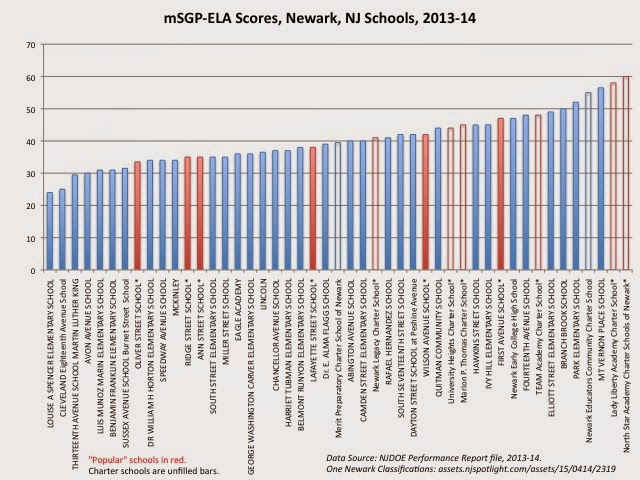 SGPs are supposed to show how well a school performs on tests while acknowledging that students don't all start from the same place. The measures are still biased by economic disadvantage, but not as much as absolute test scores. Which means that a school with more students who quality for FL has a better chance of doing well when judged by SGPs than by mean scale scores.

Here we see that popular schools vary a lot more in their growth measures. That suggests that being "effective" -- doing well with students even if they are in economic disadvantage -- is less important for popularity than doing well by absolute measures. But, again, those absolute measures are correlated to student characteristics.

Let's state the issue plainly: "Popular" schools under One Newark may be superior on test scores measures, but they enjoy an advantage in enrolling fewer students who are economically disadvantaged. Is One Newark rewarding schools for their effectiveness, or for their differing student characteristics?

One more thing -- it's not just the students themselves who differ: 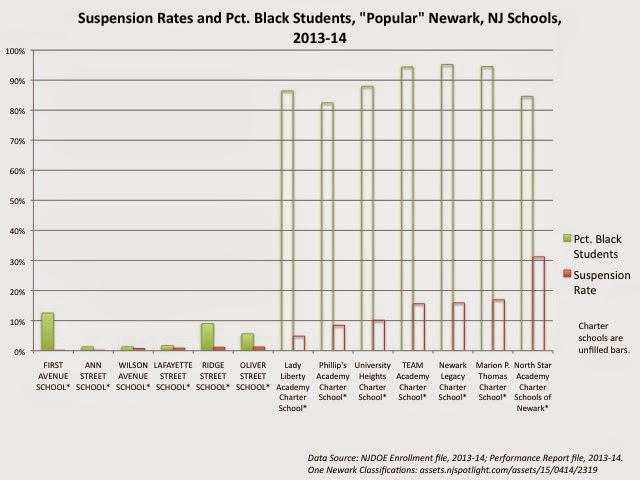 Are the parents clamoring to get into North Star aware of this? If so, do they think it is a good thing? Or do they see at as a price to pay for attending North Star? And why don't the popular district schools -- again, serving largely Hispanic and white students -- have those high suspension rates as well?

Another big difference is the experience of staff: 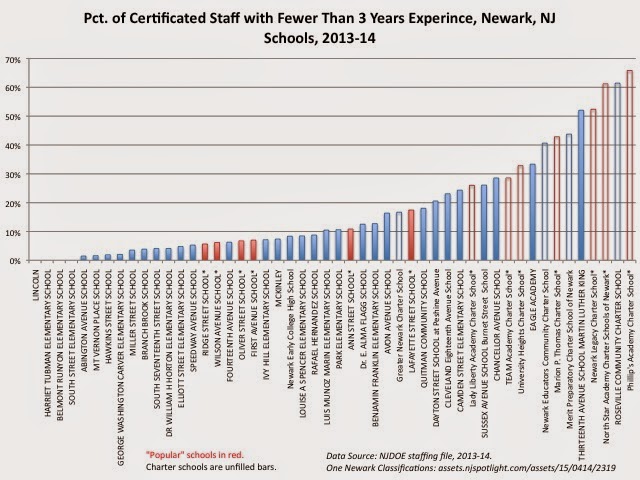 The popular charter have staffs with many inexperienced teachers. At North Star, again Newark's most popular school, more than 60 percent of the faculty has fewer than three years of experience.** Again, do the parents who chose North Star think this is a good thing? Or do they not care? Or do they care, but think staff experience isn't nearly as important as other factors -- including student population characteristics?

We don't know, and that's the critical point. We just don't know enough yet about how One Newark is going to continue to affect the city and its families to allow it to continue without fully analyzing the data from its first year. Which is why NPS needs to release its numbers immediately. From my report:

The questions require study over and above the analysis of data gathered in the administration of One Newark. Nonetheless, a complete release of the One Newark data would be an important first step in addressing these issues. To that end, NPS should release as full a set of data regarding One Newark applications as soon as possible.

Ideally, this data set would link every student to their demographic profile and locale (as designated by zip code) as well to all of the choices they and their families made under One Newark. If this is not feasible, NPS should, at the very least, release the complete list of preferred choices for each school, numbered 1 to 8, based on the One Newark application. This would allow for a more comprehensive analysis of the effects of One Newark on student sorting throughout the city.

This is, to my mind, a perfectly reasonable request, and more than justified by my initial analysis. It's irresponsible to implement a system like One Newark without fully evaluating its effects.

Anderson has repeatedly said her goal is to create more "great schools" in Newark. While that's laudable, she should not be allowed to continue with her plans to create those schools unless and until she is willing to allow stakeholders to determine how her plans are affecting Newark's families and schools.

It's time for NPS and the state to be held accountable for what they are doing. Release the data, as soon as possible. 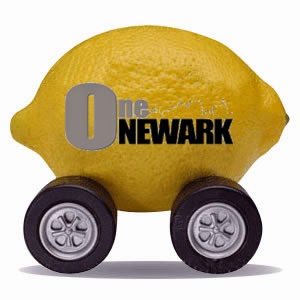 ADDING: As if on cue, Bruce has more on the very real issues of charter school expansion. The fact that the issues of charter proliferation fall on a racially segregated population of students and families in Newark is not a trivial concern.

Are we ever going to have a frank conversation about this?

* As always, Bruce is my advisor in the Ph.D. program at Rutgers GSE.

** I should point out that Phillip's Academy is an exceptional case. It's the only charter conversion in the state: it was a private school that converted to a publicly-financed charter school. It's reasonable to assume that at least some of the staff has significant experience teaching in a private school setting, even though their public school experience would be limited.