As I wrote yesterday, the confident claim of Common Core supporters that PARCC is a "better" test has little evidence to back it up. But no matter; these folks continue to make broad, unsubstantiated assertions about the new tests, based merely on their own beliefs.

Worse, the PARCC cheerleaders have developed a nasty habit of snidely dismissing anyone who doesn't share their enthusiasm for the Common Core State Standards and the tests aligned with them. Here's a case in point, from the reliably reformy Atlantic Monthly and author Laura McKenna:

The PARCC test for its part doesn’t require much more time than previous assessments. In the past, all public-school students in New Jersey, for example, took a state-designed standardized math and reading test. Fifth-grade students had 316 minutes to fill in the bubbles on an answer sheet. The PARCC’s fifth-grade test, meanwhile, will take 405 minutes. That might seem like a big difference for a 10-year-old, but the 89-minute difference doesn’t have much impact on the 180-day school year. That’s about a quarter of the time that my teenage boys like to spend playing Super Mario Brothers on any given Saturday.

First of all, there are plenty of people -- myself included -- who thought the NJASK took too much time to begin with. As Sarah Blaine points out, a New Jersey 4th Grader will spend more time in one year taking the PARCC the PARCC and other standardized tests* than a law school graduate will spend taking the bar exam.

There's no need for this: we could be using appropriate sampling methodologies to get all the information we need to direct education policy. The mere administration of the PARCC requires significant time and resources from schools; this is certainly a legitimate concern.

In addition, the time giving the tests is only part of the time devoted to the tests. And there is no question that tests like the PARCC redirect instructional hours toward test prep. Here's Bob Shepherd:

4. The tests have enormous incurred costs and opportunity costs.

I'm guessing McKenna wouldn't allow her own kids that much time playing Super Mario Brothers. I'm also guessing she wouldn't like it if all this test prep leads to a narrowing of the curriculum at her children's school. Sadly, she appears to be unaware that this is what is happening in many school districts:

The reality of the Common Core model is much more boring. America’s schools could be better, no doubt. They could be more equal. They could be more effective in preparing kids for the new, global economy and the ever-growing rigors of higher education. But there is no evidence that one set of standards, that a single standardized test, will alter the basic school experience of children. They will probably still have to do book reports on Abraham Lincoln and To Kill a Mockingbird. They almost certainly will still have time to joke around on the playground with their buddies. They will be evaluated by teachers’ exams and rubrics and probably won’t be penalized by the Common Core tests. [emphasis mine]

As I've noted before, the notion that these tests do not have high stakes for children is just flat out wrong: even if you don't buy into the notion of these tests influencing a child's self-image, the use of these tests for placement into advanced courses by itself makes them high-stakes.

In contrast, since the advent of No Child Left Behind (NCLB), with its high stakes for schools, the traditional pattern of time allocation across subjects in elementary schools has changed markedly. Five years into NCLB, researchers found that 62 percent of a nationally representative sample of all districts in the United States—and 75 percent of districts with at least one school identified as needing improvement—increased the amount of time spent on language arts and math in elementary schools. These increases were substantial: a 47 percent increase in language arts and a 37 percent increase in math. Correspondingly, these districts decreased time allotted to other subjects and activities, including science, social studies, art, music, physical education, and recess (McMurrer, 2007).

Other studies from the NCLB era conclude that the higher the stakes are for educators, the more curriculum and instruction reflect what's on the test—particularly in low-performing schools where the threat of sanctions is strongest. A study of a large urban district from 2001 to 2005 (Valli & Buese, 2007) found that as worries about adequate yearly progress increased, teachers matched the content and format of what they taught to the state test. These researchers concluded that the content of the tests had effectively become the learning goals for students.

Au's 2007 synthesis of 49 recent studies found a strong relationship between high-stakes testing and changes in curriculum and pedagogy. More than 80 percent of the studies in the review found changes in curriculum content and increases in teacher-centered instruction.Similarly, a study of California, Georgia, and Pennsylvania school districts found that teachers narrowed their curriculum and instruction to focus on tested topics and also increased their use of test-like problem styles and formats (Hamilton et al., 2007).

Now, it may be that McKenna's school district hasn't felt this pressure acutely yet; that doesn't mean it's not happening in other places. And it doesn't mean that suburban districts, fearing the crashing of test scores like we saw recently in New York, aren't also now feeling the heat. In fact, the reformy types behind the PARCC in New Jersey have been explicitly clear in stating that they are looking to set up a narrative of failure for suburban public schools.

Given all this, I'd say suburban parents in New Jersey and elsewhere are more than justified in their apprehension about the PARCC. I'd say they have every right to question why local high school end-of-course assessments should be replaced by the PARCC. I'd say that after having seen the narrowing of the curriculum in New Jersey's urban schools, suburban parents should be asking if the same thing is going to happen to their schools post-PARCC.

McKenna and her fellow cheerleaders, however, see such concern as the fretting of a bunch of ill-informed, naive ninnies:

A typical suburban parent, like all parents, has an intense, natural instinct to protect his or her kids. We parents are hard-wired to protect our babies from the unknown—and for the most part, this is a good thing. After all, protection of offspring and suspicion of outsiders have kept the human species alive for millions of years. But this instinct sometimes takes parents in the wrong direction. Just look at the anti-vaccination movement: Though the instincts of anti-vaccination parent activists are pure, their actions have resulted in what’s arguably a public-health crisis in the country.

Isn't that lovely? According to Laura McKenna, if you have any doubts about the PARCC, you are the equivalent of Jenny McCarthy!

Am I the only who sees the irony in a group of people, claiming that the PARCC measures critical thinking, making such poorly reasoned arguments? We have reams of research showing the relative benefits and risks of vaccination; where is any equivalent evidence regarding standardized testing, let alone the PARCC? Where is any research confirming that the PARCC is a "better" test than what came before? Where is the data that shows PARCC has greater external validity, or accurately assesses the quality of instruction? Where's the proof?

This condescension is completely unwarranted and, frankly, obnoxious. People have legitimate questions about the role of standardized testing in America's schools. They have every right to ask if the influence of the education-industrial complex, the profiteers behind the testing movement, has grown too great. They have more than enough reasons to be leery of the PARCC or any other standardized testing regime.

I'll give McKenna this: at least she seem to understand that these tests are not about informing instruction:

Parents need to understand why a new universal set of standards is important, particularly parents in good school districts where schools are working well. They need to know how their kids will benefit from this program—and if their kids won’t benefit, parents need to know why these test results serve the larger public good, that they can help shape policies that will help others. Parents need to know that their kids will continue to be graded based on their teachers’ assessments and that the tests really serve to provide data for administrators and political leaders who can set policies based on students’ overall performance. Parents need to know how the Common Core differs from previous state curricula and how it will affect their kids on a daily basis. Simple facts—that the Common Core does not prescribe certain textbooks, for example—would go a long way in dispelling confusion. [emphasis mine]

McKenna agrees: PARCC tests aren't designed to inform student instruction (of course, even NJDOE officials admit this when pressed). However, if these tests are really tools for making policy, there is no reason to test every child twice in every school year in most grades. We could get all the data we need for far less cost and with far less intrusion.

McKenna and her fellow PARCC cheerleaders shouldn't snidely dismiss their fellow parents who continue to point this out. 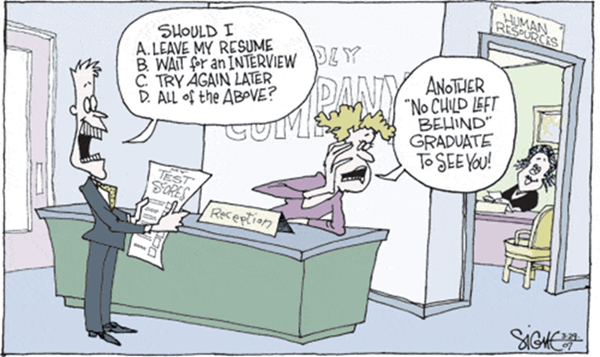 A lack of extern al validity.

* I try to get this stuff correct, so to be clear: the science test is what puts Grade 4 over the top, after the students take math and language arts tests. But science is only tested in Grades 4 and 8 (there's also the biology test in high school). The science test is not PARCC.