Over the past few weeks author and journalist Paul Tough and his new book How Children Succeed:  Grit, Curiosity, and the Hidden Power of Character have been making a splash in the world of education reform.  The book has been highlighted in the New York Times, on NPR, and on various other news outlets.

And then there was Education Nation.  Brian Williams seems to have a major crush on all things Tough.  And as always, the charter school franchise KIPP is mentioned in nearly every segment as a school “beating the odds”. This year, all the hype was about KIPP’s character education program.  Williams later went on the do a Rock Central segment called “True Grit: Teaching Character in the Classroom“.

Tough’s book centers on the idea that critical non-cognitive skills, which he calls “character”, can be hindered due to poor parenting and the stresses of poverty.  He argues that these skills are more important than the fixed idea of IQ and that schools should focus on developing skills like “grit (perseverance), self-control, optimism, gratitude, social intelligence, zest (enthusiasm), and curiosity.”  He also points to research that shows attachment to parents and shielding young children from stress during the first years of life can also influence these characteristics later in life. 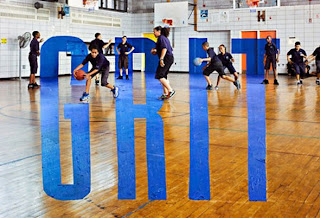 “GRIT” is a piece of perspective art made by Doyle Partners in conjunction with the New York Times. The actual piece itself is located in the KIPP Infinity Middle School in Manhattan.(From: http://stapledesign.com/2011/09/grit/ )

How is This New?

I am not clear on what all the hype is about regarding Tough’s book.  I teach on a child/adolescent inpatient unit at a psychiatric hospital in Chicago.  We teach very similar types of social skills (I refuse to call it “character” which adds an implicit deficit understanding of children’s behavior.)   In the mental health field, clinicians and mental health workers have been teaching these skills for decades.  This research is nothing new. As a trained special education teacher, I spent a large part of my education graduate program learning the direct instruction of social skills.  Schools have emphasized social/emotional learning for as long as I have been a teacher.

To me, the biggest difference in what KIPP does and what happens at my hospital is that we teach these skills in a therapeutic context.  That is, children spend the whole day discussing their personal lives, including abuse, trauma, neglect, violence, and home lives.  We teach them ways to overcome frustration in the moment, so it does not blow up into aggression or self-harm.  We connect their depression (lack of “optimism”), their feelings of hopelessness (lack of “grit”), and their anger (lack of “zest” or “self-control”) with their lives and then teach them ways to cope.  We are always clear that these types of coping skills are intended as a momentary fix to get kids through difficult situations, but the real healing happens through the long process of directly dealing with the trauma by trained professionals.

KIPP’s approach to character education is eerily divorced from the reality of inner city children’s lives.  They teach, reinforce through praise, grading, or punishment, traits like “grit, self-control, or optimism”.  They even give out report cards to measure the unmeasurable “character” of children.  A majority of KIPP schools are middle schools, a time of development when children are first beginning to question the world around them, and some will undoubtedly rebel.  And yet, KIPP’s curriculum is not based in social justice, in teaching students about oppression, racism, or class structures.  Too often for inner city youth, as they begin to question the gross inequalities of their lives, when they begin to realize something is off about the treatment of their communities by those in power, many react in anger.  KIPP’s answer is lock-down.  Tell young people to exhibit “self-control” or “grit”, and to “work, hard, be nice.” There is no conversation about WHY the children (often rightfully so) are feeling the way they are.  There is no talk about historical oppression or institutional racism.  At KIPP, if you do not exhibit the correct “character” it is YOUR fault, and YOUR fault alone.  And if you cannot just get over whatever it is that angers you, if you cannot or will not just “be nice”, well then there is the door.  The “no excuses” ideology drops hundreds of years of injustice in the lap of children.

To a social justice educator, KIPP’s approach is crude behaviorism that will never address the broader needs of children and communities.  Look at what happened during the Chicago Teachers Strike.  Among the children who participated on the picket lines, at the rallies and the marches, something magical happened. Students did not need to be told to sit still and have “self-control”, but exhibited it naturally through the empowerment of fighting for justice.  “Optimism” was authentic as students felt the excitement of finally having voice.   What is the value in teaching children, almost like training a dog, to be able to sit for hours, to have the “grit” to finish that tedious task or long test?  Why not create curriculum that is so engaging and relevant that children discover a joy in learning?  No instruction on “grit” is needed when students are empowered and engaged.  “No excuses” pedagogy is rooted in obedience and submission, in breaking children’s spirit, while social justice pedagogy empowers and uplifts using that spirit as an asset.

And unfortunately, KIPP teachers model this obedience and submission by gladly letting their labor be exploited.  Just as the children are taught to be submissive-to silence dissent and give up their childhoods in the mission of college and financial success, KIPP teachers are taught to be submissive to oppressive work loads and hours in the mission of closing the achievement gap.  Instead of contributing to the struggle that creates better work environments for all workers, which would ultimately benefit their students and communities, they become an example of the compliant exploited worker who never questions authority.  And without union protections or tenure, the teachers who do speak out are silenced quickly.  KIPP has that robotic feel of a dystopian future where people walk around with false smiles while purposefully ignoring the messy, or should I say gritty, stuff of life.

Tough does talk about a few semi-promising programs in Chicago such as An Ounce of Prevention-a program aimed at supporting teen mothers, One Goal-a program designed to get students into and through college, and Youth Advocate Programs, or YAP-a group which gives intensive mentorship to the most at-risk children.   These programs, especially an Ounce of Prevention, are fundamentally anti-poverty programs.  This type of intervention can be powerful, but they are band-aids, and often very expensive band-aids.  Giving mentors to youth involved with gangs, drugs, and violence is a positive step, but it does not change the underlying structures of racism, segregation, and oppression which led neighborhoods to fall prey to those social ills in the first place.

During a recent talk in Chicago, Alex Kotlowitz (author of books like There are No Children Here and the director of the documentary The Interrupters) asks Tough about these structural problems:

Kotlowitz:  “So I read this book, and one of my fears, in some ways, is that people will read this book and think…all kids need is some ‘pluck’, some ‘grit,’ and they can get themselves out of there [poverty].  Does it in turn ignore/neglect, those larger structural issues that are clearly so important to these communities…?”

Tough:  Yes, those kinds of neighborhoods could use all kinds of structural change…But I also really believe that education, maybe not the education we have right now, but education can reverse things very quickly.  That if a kid grows up in that neighborhood and gets the right kind of support, the right kind of intervention, they can end poverty for themselves, um, right away, and it doesn’t have to take a huge change for the whole neighborhood. [emphasis mine]

Tough ends by saying, “Talking about giving kids the skills they need to succeed is the right conversation to be having.”

Tough echoes the arguments of the corporate education reform movement.  You can hear the whisper of “poverty is not destiny” so often on the lips of Michelle Rhee, Wendy Kopp, Joel Klein, Geoffrey Canada, and of course embedded in the KIPP philosophy.  He gives the elite and powerful the ultimate excuse to do nothing about structural problems of poverty.  No need to invest in desegregation programs, jobs programs, to increase worker rights, or end the criminalization of our nation’s Black and Latino youth.  We do not need to address the savage inequalities in school funding.  Nor is there any discussion about where the massive amounts of funds for these intervention programs will come from, especially in light of most state’s cuts to mental health and education services.

Who Controls the Conversation about Character?

It needs to be pointed out that Tough, a well-to-do white male, is having this conversation with another well-to-do white male discussing interventions developed by other well-to-do people and implemented in programs sponsored by well-to-do board of directors and schools founded and run by majority well-to-do white people.  And so, unsurprisingly, they all use the language of oppression, of blaming the child for their lack of character, and their families for not giving the support to develop that character.  Notice how structural concerns are acknowledged and then callously brushed aside.

Tough begins his book talking about how poverty creates obstacles in children’s lives, but never allows himself to say that we should combat that poverty directly.  He toys around the edges, citing programs that do the work of anti-poverty programs, but then still ends on teaching “grit” in no-excuses charters as the ultimate answer.

And he never acknowledges the many beautiful, powerful character traits low-income children already possess like loyalty, passion, a strong sense of justice, quick reactions in times of difficulty, and the ability to fight for what is right.  And sometimes that “bad attitude” is a justifiable distrust of authority, especially white authority.  Sometimes that lack of “zest” is appropriate given the mental health state of the student.  I would rather have a community-based, social-justice curriculum, which instead of ignoring oppression and trauma, confronts it directly.  KIPP’s standardized curricula do not allow for the beauty and range of human possibility.  As this author writes, focusing only on the specific character traits of KIPP “effectively exclude[s] autistics, introverts, pessimists, authority-questioners, union organizers, and other neurodivergent ‘undesirables.’”  No wonder KIPP has such high rates of attrition, especially in exceptional student populations.  I get the feeling that the future Einsteins and Picassos of our world would do poorly in the compliance-focused KIPPs.

But on one thing, Tough is correct.  He speaks about the need for character education in affluent communities.  I do not think they need “more adversity”, as he argues, but rather they need to be taught empathy, justice, and solidarity in order to go out and refuse to participate in a social system which concentrates all the wealth in the hands of an elite few.  They should be taught of privilege, oppression, and the legacy of racism. They need to fight against a system which allows racism and segregation to continue uncontested.  They should be inspired to humbly join the communities in our inner-cities in their fight for social justice.

The struggle for equality? Now THAT’s the kind of character education I’m interested in discussing… 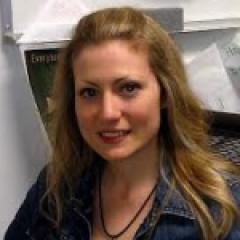