Yong Zhao: Problems with Evidence-based Education: Side Effects in Education 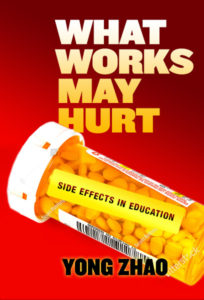 The following is the Introduction of my book What Works Can Hurt: Side Effects in Education published by Teachers College Press in June 2018.

“Ibuprofen may cause a severe allergic reaction,” you are warned when you buy a bottle of Advil, and “this product may cause stomach bleeding.” Medical products are required to disclose clearly their intended effects and known side effects. The intended effect of the common pain reliever Ibuprofen, for example, is to temporarily relieve “minor aches and pains.” The drug’s known side effects include allergic reaction and stomach bleeding. Hence Ibuprofen products must carry a warning label of their potential adverse effects.

But it is unlikely that anyone has received such warning about educational products.

“This program helps improve your students’ reading scores, but it may make them hate reading forever.” No such information is given to teachers or school leaders.

“This practice can help your child become a better student, but it may make her less creative.” No parent has been given information about effects and side effects of instructional practices in schools.

“School choice may improve test scores of some students, but it can lead to the collapse of American public education.” The public has not received information about the side effects of sweeping education policies.

It is also rare to find published research studies in education that report the potential adverse effects of an intervention. Educational research typically has focused exclusively on collecting evidence to prove or disprove the benefits or intended effects of products, programs, policies, and practices. The recent movement toward evidence-based educational practices and policies is only about gathering and verifying evidence for effects. It shows no concern for negative side effects.

The old Chinese saying “drink poison to quench thirst” was my first thought when the No Child Left Behind Act was enacted (No Child Left Behind Act of 2001, 2002). The law had bipartisan support and was widely viewed as the right solution to some of the most persistent problems in American education: low achievement in reading and math and the growing achievement gap. The only loud protest at the time was that it was an unfunded federal mandate, meaning that if there were more money to support its implementation, the solution prescribed in the law would really lead to transformative changes in American education.

As readers will see in Chapter 1, the main ingredients in the NCLB solution were testing and accountability, a focus on reading and math, and scientifically proven effective instructional materials and strategies. Having grown up in China, I had personal experience with testing and accountability. I knew how high-stakes testing corrupts education, turning it into test preparation. I knew how a test-driven education causes damage to the physical and psychological well-being of students, parents, and teachers. I knew that a test-driven education does not result in citizens who can defend a democracy, nor does it produce the creative and innovative individuals needed in the modern economy. I knew that it does not reduce inequity, either, and actually, as it has been practiced in China, such an education perpetuates inequality. The Chinese have struggled with the poisonous consequences of a test-driven education for a long time. I discuss this in Chapter 4.

NCLB was intended to quench the urgent thirst for better education, but the solution it proposed was wrong. It was the poisonous wine in the Chinese saying, “yinzhenzhike,” or “drinking poisonous wine to quench thirst.” The solution might appear effective in relieving thirst temporarily, but it kills in the long run. I decided to write a book to warn about the long-term damage of NCLB. The book, Catching Up or Leading the Way: American Education in the Age of Globalization, was published in 2009.

I was not so naïve as to think that my book would stop the self-destruction in American education, but I am happy that I sounded the warning. As it turned out, NCLB caused massive damage to American education. It did little to solve the problems as intended and forever changed the landscape and spirit of American education, for the worse. More important, the research and thinking I did for the book led me to pursue a line of inquiry that has proven meaningful for thinking about educational issues.

“Medicine can be poisonous” is another Chinese saying that I found applicable to NCLB. The law claims to turn education into a field of evidence-based practices. The phrase “scientifically based research” was mentioned over 100 times in the law. It tied funding to practices that had been proven effective with scientific evidence. With billions of dollars, the law pushed the evidence-based movement to new heights in education. Educational research was encouraged to learn from medicine, a field that has seen transformative changes that can only be envied by education. The primary lesson to be learned from medicine was randomized controlled trials (RCT). But NCLB neglected to take into account another valuable lesson that helped transform medicine into modern medicine: Medicine can be poisonous.

The backers of NCLB and other advocates of evidence-based practices were interested only in proving the effectiveness of interventions—that is, whether or to what degree an intervention causes the intended outcome to happen. They did not consider the side effects—secondary adverse effects—of the interventions. But my observations of education in China and the United States suggest that education, just like medicine, can have side effects, causing harm while doing good. The Chinese education system, on the one hand, is very effective in producing a compliant and homogenous citizenry and workforce, but it has failed to produce creative and diverse thinkers. The U.S. education system, on the other hand, seems to be able to cultivate more creative entrepreneurial individuals but fails to teach the basics to a large group of children. Does this suggest that certain educational practices can be effective in achieving certain goals but can hamper the realization of other, equally important goals?

This question led me to explore side effects in education. Side effects in education can happen for a number of common-sense reasons. First, time is a constant. When you spend time on one task, you cannot spend that same time on another. When a child is given extra instruction in reading, he or she cannot spend the same time on art or music. When a school focuses on only two or three subjects, its students do not have the time to learn something else. When a school system focuses on only a few subjects such as reading and math, students won’t have time to do other and perhaps more important things.

Second, resources are limited. When they are put into one activity, they cannot be spent on other activities. When school resources are devoted to the Common Core, other subjects become peripheral. When schools are forced to focus only on raising test scores, activities that may promote students’ long-term growth are sidelined.

Third, some educational outcomes can be inherently contradictory. It is difficult for an education system that wishes to cultivate a homogenous workforce to also expect a diverse population of individuals who are creative and entrepreneurial. Research also has shown that test scores and knowledge acquisition can come at the expense of curiosity and confidence.

Fourth, the same products may work differently for different individuals, and in different contexts. Some people are allergic to penicillin. Some drugs have negative consequences when taken with alcohol. Likewise, some practices, such as direct instruction, may work better for knowledge transmission, but not for long-term exploration. Charter schools may favor those who have a choice (can make a choice) at the expense of those who are not able to take advantage of the choice.

This book is about my discoveries over a decade. Briefly, I have discovered that any educational intervention, for the obvious, common-sense reasons mentioned above, can do harm. I also have found that ignoring side effects is one of the main reasons for the perpetual wars and pendulum swings in education. Furthermore, I found that neglecting side effects has led to the dismissal of interventions that actually may be effective in some contexts. Overall, neglecting side effects has hindered the progress of education.

The specific focus of each of the chapters of the book is as follows: Chapter 1 discusses the negative side effects of No Child Left Behind. Chapter 2 uses evidence of the side effects of the Reading First program to discuss why simply borrowing randomized controlled trials from medicine does not lead to educational transformation. Chapter 3 follows the long-fought battle about the effectiveness of direct instruction and uncovers some of the negative side effects of direct instruction in general and of Direct Instruction in particular. Chapter 4 discusses the effects and side effects of East Asian education systems, pointing out that high performance on international tests comes at the price of student well-being and creativity. Chapter 5 uses v to illustrate one major source of side effects: multiple and sometimes competing educational outcomes. Chapter 6 uses teacher qualifications and school vouchers as examples of another major source of side effects: individual variation. Chapter 7 discusses the consequences of not attending to side effects, with examples of the ras well as the perpetual pendulum swings of educational ideas. Chapter 8, the final chapter, is a call to action for policymakers, researchers, and consumers of education. It illustrates how attending to side effects can help education move beyond century-old wars such as child-centered versus curriculum-centered approaches. The chapter concludes the book with specific recommendations for policymakers, educational researchers, product developers, and education consumers (i.e., parents, teachers, and school leaders).

I intend this book to serve a number of purposes. First, it is a call to policymakers and education leaders to begin paying attention to potential adverse effects when they develop and adopt policies and programs. Instead of looking only at evidence of effectiveness, they should ask for evidence of potential side effects in order to make informed decisions. Second, this book is a challenge to educational researchers and intervention developers. They should study both effects and side effects and disclose them to consumers. Studying side effects also can incentivize them to continually refine their interventions. Third, I hope this book is the beginning of the development of a consumer’s guide for teachers, parents, and students. While I am able to present evidence of side effects of some interventions in this book as examples, I have not been able to gather such evidence for many other, more popular interventions. I am hoping that this book can raise awareness of side effects among consumers of educational products—programs, policies, teaching strategies, curriculum, educational technology products, and so on—so that they will demand such information when making and accepting choices.

Education faces many uncertainties today. But one thing is certain: We will see a slew of new policy proposals as states implement the Every Student Succeeds Act and whatever actions the new administration may take, in addition to the mind-boggling number of products, programs, and services already vying for the attention (and money) of parents, schools, and education systems. When making decisions about policies and products, we should ask for information about their adverse effects in addition to evidence of positive effects.

What works can hurt! 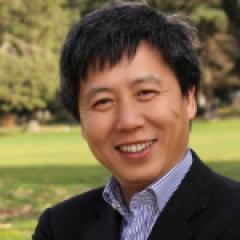