The hunger strike for Dyett High School ended this morning on day 34.

Once again I headed to the south side to be with my friends and fellow education fighters known as the Dyett Twelve. Education activists had been told that the hunger strikers would have an announcement this morning, and many of us converged at the Rainbow Push Coalition broadcast to be there in support.

I sit in the pews behind Cathy Dale and Jeanette Taylor-Ramann – two women who I have come to love and respect through this struggle. After 34 days of fasting the hunger strikers have an other-worldly presence. They seem so strong and focused, yet vulnerable at the same time.

The Dyett hunger strikers make their decisions collectively, and I have seen this process first-hand. There is always a careful and respectful debate, an analysis of strategical plan, and a strong focus on the mission: A neighborhood high school open to all children governed by the community and focused on a curriculum that the community wants.

It was difficult to bring this strike to a righteous close and a real win.

The planning for curriculum and governance of the school has not yet been decided, and this is where national allies and supporters need to take notice. To continue this fight, we cannot turn away and let the appointed school board of the Chicago Public Schools think we are no longer watching. Our continued insistence on a school FOR the community, FROM the community will bring the hunger strike to its full resolution.

A hunger strike is an action of last resort, a stance taken by those who no longer agree to be victims of a system that does not have their community’s best interest in mind. In the words of Jeanette Taylor-Ramann, “You have to quit talking to people when you realize that the other side is not listening.” The hunger strikers are people who decided to fight outside of the rules of those who would rule them.

As Jitu Brown, one of the hunger strikers, said at today’s announcement, “We made the decision not to bow down to people who do not love our children.”

Throughout this struggle, many of us have been reflecting on our own commitments to public education. I hear from people daily who are in awe of the sacrifice that the hunger strikers made, and those of us who spent time with them under the trees at Dyett cannot help but be forever changed.

As we continue this fight forward, we need to develop a heightened vigilance in making sure that as many schools as possible remain in the hands of the public. We also need to ask ourselves – what are our organizations doing to promote education justice? How do we put ourselves on the line? We all need to make a commitment to hold fast to what belongs to us. Refuse to be complicit in the privatization of our schools and our children as profit centers.

The Dyett Twelve gave us evidence and witness of lives well-lived, and we all owe a debt of gratitude to them. The fight goes on.

Michelle Strater Gunderson is a 29 year teaching veteran who teaches first grade in the Chicago Public Schools. She is a doctoral student at Loyola University in Curriculum and Instruction. 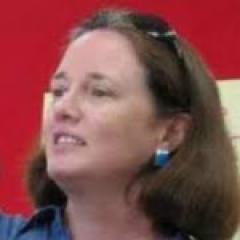 Michelle Gunderson is a Chicago Public School teacher and Functional Vice President for elementary schools for the Chicago Teachers Union. She is a doctoral...
Author Profile
Quick Search
Sign up for NEPC Emails