There’s been more than a little opportunistic, misguided bloviating about Baltimore in recent weeks, including misguided discussions of and references to per pupil spending in Baltimore City Public Schools. The gist of most claims has been that Baltimore City Schools spend more than most other large (or large urban) districts in the country, but their outcome still stink. Thus, for example, more money isn’t the issue. We just need stuff like, more charter schools, which don’t need more money to be awesome (except that, well, the most awesome among them elsewhere tend to spend a lot more money!)

My point here is to simply lay out the data, the issues and some context for better understanding school finance issues facing Baltimore Public Schools.

Baltimore is Carved out as a Segregated, High Poverty City District

Maryland, like other “southern” state school systems is generally organized into county school districts, some of which are increasingly racially and economically diverse. But, Maryland like other southern states saw fit in their historical development of public school governance to isolate/separate certain “city” school districts and make them their own. Invariably, these city/county separations fall sharply (or did at their origin) along racial lines. That’s certainly true in Baltimore as the map below indicates. 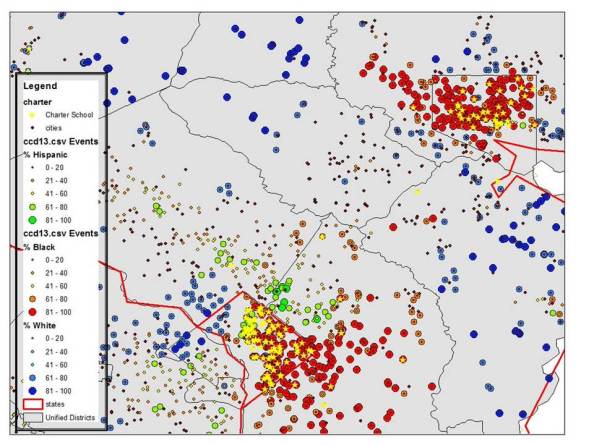 So, what we’ve got here is a district that from its origin, is a racially isolated, high poverty district that has to find some way on its own to dig out of that hole.

Maryland has put some, though not that much effort into funding equity

It is true that the state of Maryland has put more effort perhaps than some other states in targeting funding toward districts serving children with greater needs. But even our own most recent estimates give the state a “D” for funding fairness, or the relationship between state and local revenues with respect to child poverty, across districts.[1]

More specifically, here’s the position of Baltimore City, compared to all other districts in the Baltimore Core Based Statistical Area, in terms of census poverty rates and current spending per pupil from 1993 to 2012.

Baltimore starts the period with 2.25 times the census poverty rate of its surroundings, and 93% of the average current spending per pupil and ends the period somewhat better in funding, with 113% of the current spending, but similar poverty disadvantage. As I explain in numerous posts and reports, relative funding and relative need matter greatly! 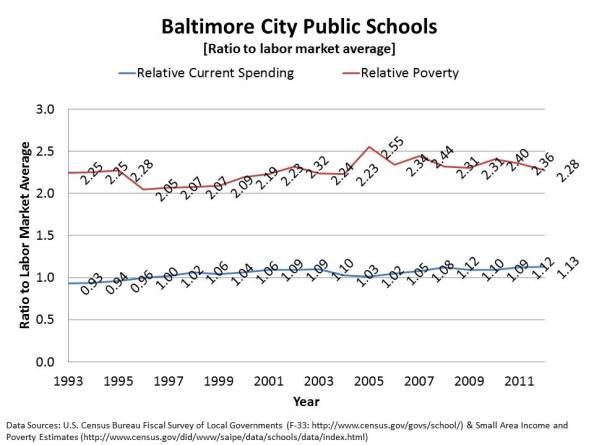 Certainly, BCPS is better off than some, in that it does have higher than average per pupil spending. But, a 13% margin on spending is hardly sufficient to close the gap for a district with 2.3 times the poverty rate of surroundings!

I decided to dig a bit deeper based on recently released data from the U.S. Department of Education, which report school site per pupil total salary (and instructional salary) expenses. Now, readers of my blog know that I’m quick to point out that the flexibility of districts to reshuffle resources across schools within districts depends substantially on states providing those districts sufficient resources to begin with. As noted above, Baltimore City really isn’t provided sufficient resources to address its extreme needs. But, I must say that in my exploration of within-district resource allocation in this case, what I found was a bit disturbing, but not surprising.

Baltimore was applauded back in 2009 in the Reason Foundation’s Weighted Student Funding Yearbook as being an innovator in weighted student funding models. You see, Baltmore was going to focus on allocating school site budgets not on deficit oriented thinking – like student needs/poverty, etc. – but rather, on performance measures. I expressed my skepticism at the time, along with critiquing other plainly idiotic aspects of the Reason report.

Whether related to the design of their weighted student funding model or not, Baltimore City Schools, by 2011-12, had accomplished (or perhaps merely maintained) a disturbingly inequitable distribution of school site spending with respect to low income concentrations.

Figure 4 shows that on average, as we move from 0% to 100% low income, per pupil total salary expense drops by over $1,200 per pupil. Charter and district schools are comparably funded, at comparable characteristics.

Baltimore City schools appear to provide about a 5% competitive wage boost over surrounding districts, but have only 90% of the staffing ratios per pupil of surroundings. It is unlikely that a 5% wage differential is sufficient to recruit/retain teachers in the City of Baltimore. Charters in Baltimore pay a higher wage differential (19% over surroundings) and have comparable staffing ratios to surroundings. But, this is only possible because they currently rely on very large shares of “novice” (first two years) teachers. Such a staffing model isn’t likely sustainable in the long term, unless as a matter of policy, large shares of teachers are annually dismissed.

Note that these data are from 2011-12 and since that time, things may have changed!(one can hope)

In the Aggregate, Baltimore isn’t the Failure that Some Claim

Finally, what about those student outcomes in Baltimore? Is Baltimore really an example of throwing money down the rat hole? Is it really the case that Baltimore spends so much more than other cities, but simply fails so much worse? Here are some graphs from a post I did a while back on the NAEP Urban District Results. 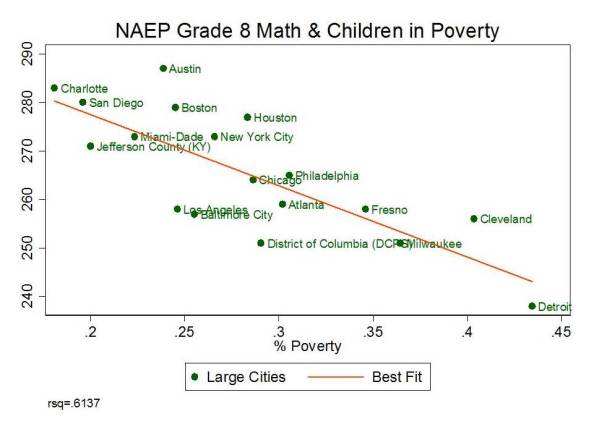 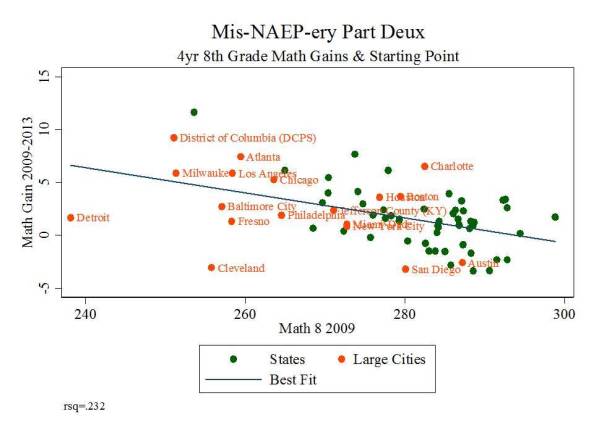 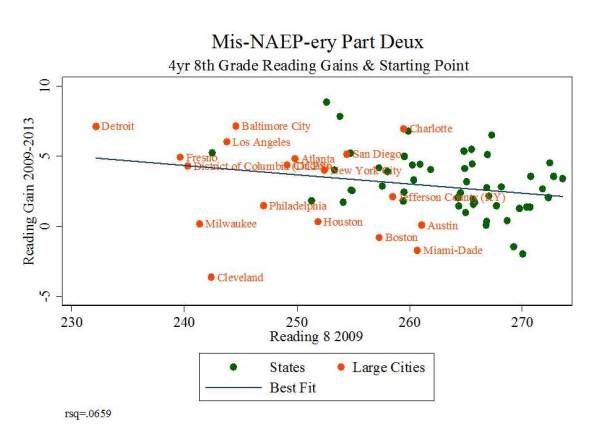 To summarize, Baltimore does somewhat less well than expected on mean NAEP scale scores given measures of their students’ low income status, but they certainly aren’t a striking outlier here.

As for gains in recent years, Baltimore has shown reasonable average gains, given expectations.

What does it all mean?

I’m not really sure I have an answer to this question. But, to break down the information above:

Baltimore certainly isn’t proof positive of the failure of pouring tons of money into traditional urban public school districts. First, we haven’t poured that much money into Baltimore, given its needs. Second, it hasn’t performed as poorly as some might characterize.

But, Baltimore does provide us with some evidence of the culpability of districts and district leadership on following through with equity objectives. As I’ve explained in peer reviewed studies, merely claiming adoption of Weighted Student Funding does not ensure equity. In fact, because WSFs are as vulnerable to political pressures as any other method of within-district resource allocation, they are as likely to yield an inequitable result.