Jersey Jazzman: The Secrets to Their "Success"

"THE" Jose Vilson had a Twitter thread up this past week about an encounter with a parent whose child is enrolled in one of the Success Academy Charter Schools. I won't quote it here because I really want you to read the whole thing, then come back so we can talk...

Whenever I hear anecdotes about charter schools, my first reaction is to go to the data. Not because I don't think stories like this parent's are worthwhile -- to the contrary, they are very important and should be told. But I do believe data can help to confirm what we might already suspect.

And what do I suspect about Success Academy?

I've been teaching long enough to know that schools and teachers vary significantly in their effectiveness, and both can make a difference in the lives of children -- particularly children who are living in economic disadvantage.  But I also know that the reformy claims of "miracle" schools are almost always way overblown. Yes, some charter schools get better results than we would expect. Yes, some may engage in a few innovative practices that might be worth considering.

But schools like Success Academy almost always have structural advantages -- advantages that have nothing to do with their governance -- over the schools against which they compare themselves:

In the minority of cases where "successful" charters out-perform expectations, I have seen no compelling evidence that freedom from teachers unions and public district school regulations, curricular innovations, or parental "choice" are what lead to "success." Instead, some combination of the five factors above almost always provide the most reasonable explanation for the difference in outcomes.

For years, I've been going to the data when confronted with a "miracle" charter school. For years, I've seen the same patterns emerge. Of course, there are many ways to approach this kind of analysis; let's apply one, which I first learned from Bruce Baker (I know, you're so surprised...), to Success Academy's oldest school and see if we can find any secrets of their "success."

The idea is simple: we'll look at Success Academy Harlem 1 and all the other schools that share its zip code. This way, we'll only be comparing schools situated in a similar geographical area. 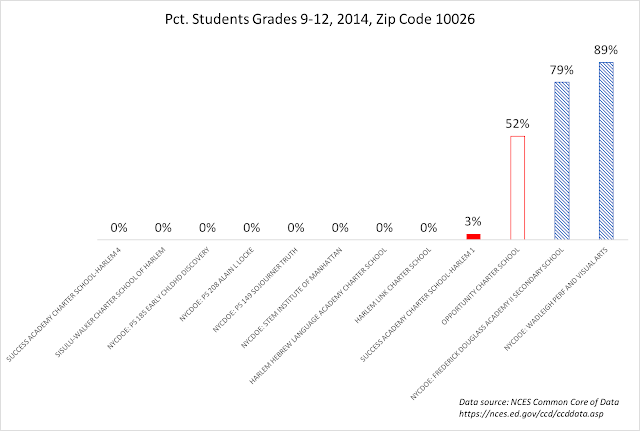 To make an apples-to-apples comparison, we have to consider the grade levels that schools enroll. In the 2014 federal data, Success Academy Harlem 1 had a handful of Grade 9 students; most were in the lower grades. In another charter in the zip code, about half the students were in high school; two other NYCDOE schools in the area were mostly high schools. Keep this in mind as we continue. 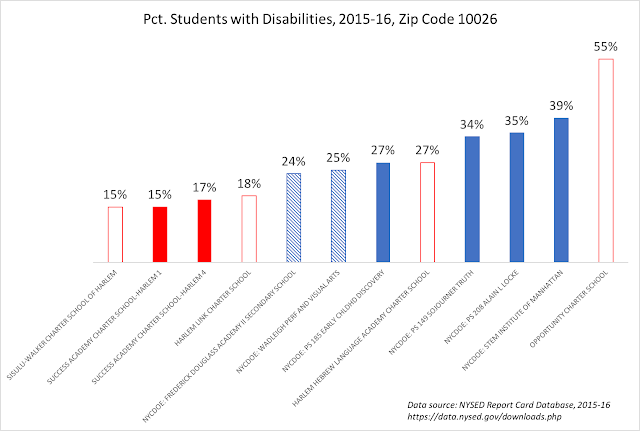 Success Academy Harlem 1 enrolls a smaller percentage of Students With Disabilities (SWD) than its comparable neighboring public district schools. Compared with the other elementary schools in the neighborhood, SA enrolls far fewer special needs students proportionally; that's true for Harlem 1 and Harlem 4. It's worth noting that the school with the highest SWD percentage in the area, Opportunity CS, was threatened with closure last spring for poor performance (I can't find an update on its status for this fall). 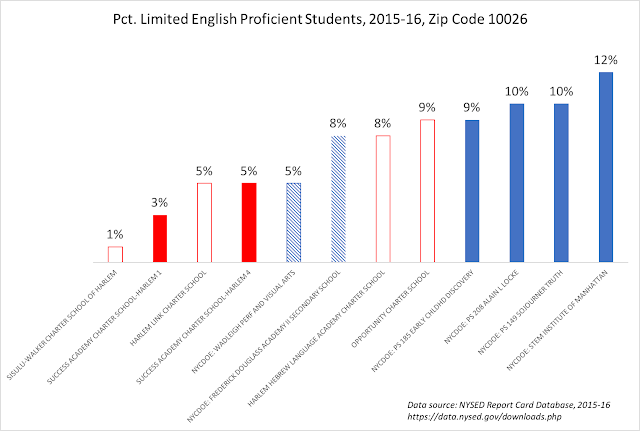 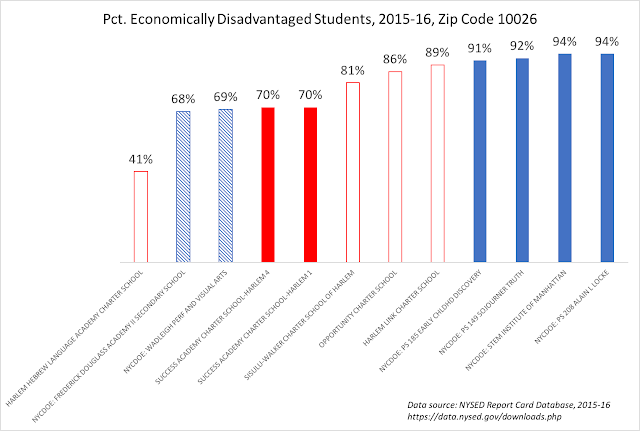 Success Academy Harlem 1 enrolls a smaller percentage of economically disadvantaged students than the neighboring public district schools serving comparable grades. Certainly, a 70 percent ED rate is high. But it's not as high as the elementary schools within the same zip code.

Let's look at the cohort attrition patterns. This is the size of the "class" of students in each school as those classes move from grade to grade. Here's the Class of 2018 (the year is when the cohort will be seniors in high school). 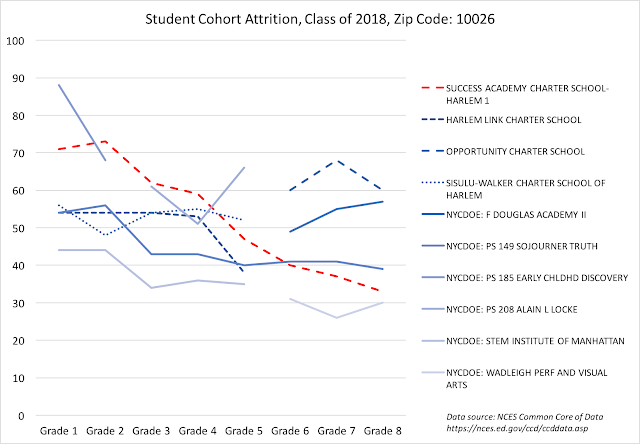 Success Academy loses many of its students as the cohort moves from grade to grade. Leo Casey of the Shanker Institute used a different data source and found the same patterns. Here's the Class of 2019: 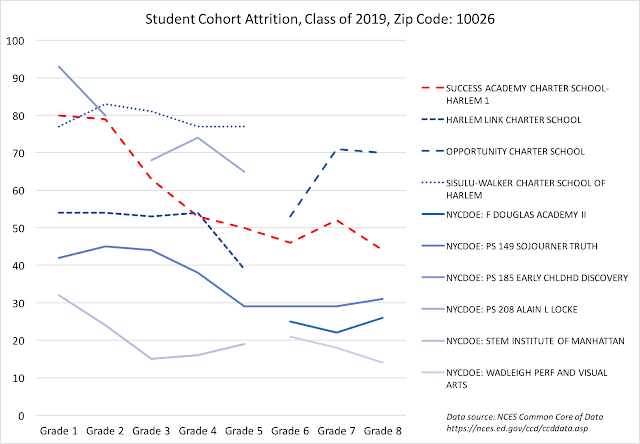 So what does the data tell us about Success Academy Harlem 1 compared to its geographic neighbors run by NYCDOE?

Something else we know about SA -- their philanthropic infrastructure gives them an enormous resource advantage:

As those of us who follow education policy and live in the greater-NYC area know, Moskowitz's Success Academy has benefitted enormously from philanthropic giving. $8.5 million from a hedge-funder in 2015. $9.3 million in one night later that year. $25 million from another in 2016. Plus another $10 million from some pikers...

This is all in addition to the monies SA gets from the government for the students it enrolls. Moskowitz's powerful friends have even made sure that she doesn't have to play by the rules that everyone else must follow. The result is a school system swimming in money -- a system that relies on funds that no one else gets to access.

Couple this with the widespread reporting about "got-to-go" lists and significant teacher turnover -- which undoubtedly keeps staffing costs lower -- and it's clear that there really is no secret to all the "success."

Now, I'm not about to say that this automatically shuts down any conversion about whether SA, or any other "high-performing" charter chain, should be allowed to exist, let alone expand. There is a serious debate to be had about segregation, class, race, and schooling. The sad truth is that reformers are correct in pointing out that we have highly segregated and underfunded public schools in our urban cores, and many parents perceive that a no-excuses charter is the best option they have for their child.

But claims that Success "succeeds" because it is free from union influence, or because it isn't directly accountable to a democratically elected school board, or because its teachers weren't trained in traditional, university-based teacher prep programs should be challenged. The data makes clear there are significant differences betweens SA's student population and those of its neighboring public schools.

This matters. They can bring up test scores all you want, but unless and until SA's cheerleaders -- and the charter school backers across the nation -- start being honest about why a small group of them do better than predicted, support for charter schools will continue to plummet. I'm not saying Betsy DeVos and Donald Trump don't have something to do with that.

I am saying that it's well past time for the charter industry to start being honest with itself -- and the rest of us. 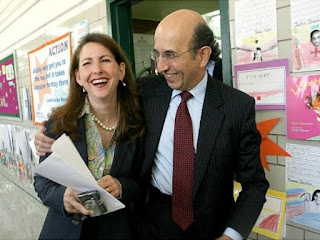