Hack Education: Selling the Future of Ed-Tech (& Shaping Our Imaginations)

I have volunteered to be a guest speaker in classes this Fall. It's really the least I can do to help teachers and students through another tough term. I spoke briefly tonight in Anna Smith's class on critical approaches to education technology (before a really excellent discussion with her students). I should note that I talked through my copy of  The Kids' Whole Future Catalog rather than, as this transcript suggests, using slides. Sorry, that means you don't get to see all the pictures...

Thank you very much for inviting me here today. (And thank you for offering a class on critical perspectives on education and technology!)

In the last few classes I've visited, I've talked a lot about surveillance technologies and ed-tech. I think it's one of the most important and most horrifying trends in ed-tech — one that extends beyond test-proctoring software, even though, since the pandemic and the move online, test-proctoring software has been the focus of a lot of discussions. Even though test-proctoring companies like to sell themselves as providing an exciting, new, and necessary technology, this software has a long history that's deeply intertwined with pedagogical practices and beliefs about students' dishonesty. In these class talks, I've wanted to sound the alarm about what I consider to be an invasive and extractive and harmful technology but I've also wanted to discuss the beliefs and practices — and the history of those beliefs and practices — that might prompt someone to compel their students to use this technology in the first place. If nothing else, I've wanted to encourage students to ask better questions about the promises that technology companies make. Not just "can the tech fulfill these promises?", but "why would we want them to?"

In my work, I write a lot about the "ed-tech imaginary" — that is, the ways in which our beliefs in ed-tech's promises and capabilities tend to be governed as much by fantasy as by science or pedagogy. Test-proctoring software, for example, does not reliably identify cheating — and even if it did, we'd want to ask a bunch of questions why we'd want it or need it.

Arguably one could say something similar about education as a whole: our beliefs about it are often unmoored from reality. Although we all have experiences in the classroom — as students, if nothing else — many of us hold onto some very powerful, fictional narratives about what schools look like, what they looked like in the past, what they will look like in the future. 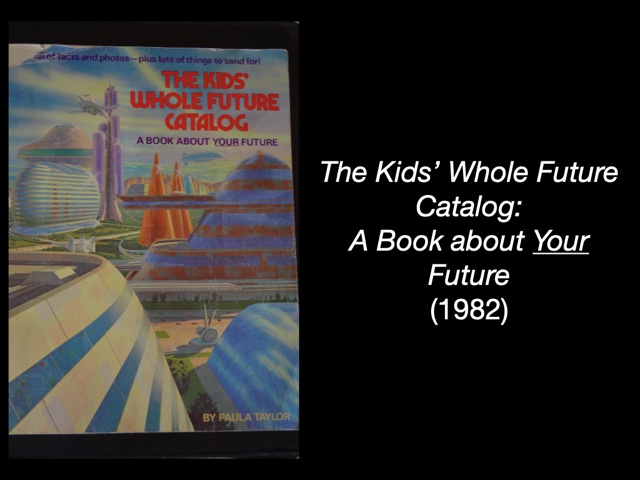 The book was published in 1982. I was 11; my brother was 8. 1982 was two years into the Reagan Presidency and two years before the broadcast of The Day After convinced me that there would be no future and that we'd all likely die in a nuclear holocaust. To be honest, I don't actually recall reading the parts of the book that have to do with the future of school. I remember reading the parts that said that in the future insects would be a major source of protein and that in the future we'd either live in space colonies or underground. The future sounded pretty terrible.

The book offered six areas that might signal what "future learning" would look like, some of which were grounded in contemporary developments of the Eighties and some of which sound quite familiar today:

"New Ways to Learn" — "Put down those pencils… close your books… and come visit a new kind of school. It doesn't look like a school at all. There aren't any desks, books, pencils, or paper. Instead, there are games to play, experiments to try, things to climb on and down and through, drawers that say 'open me,' and displays marked 'please touch'. There aren't any teachers to tell you what you're supposed to do — just 'explainers' who walk around answering questions. What would you like to do first?" 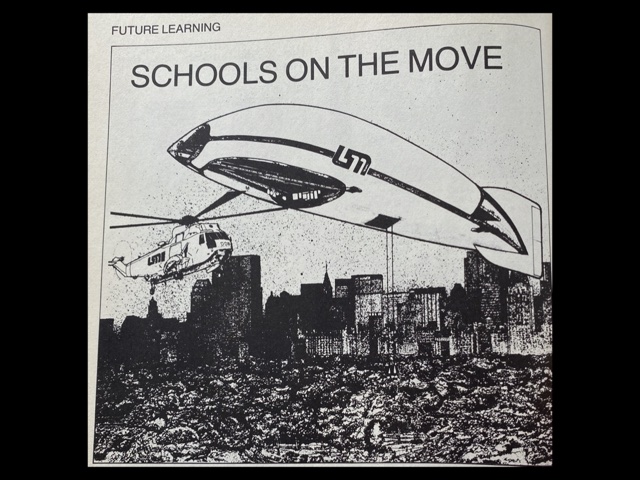 "Schools on the Move" — "Classes will never be boring on an airship traveling around the world!"

Again, whose future would this be? And is that rubble the airship is sailing over? 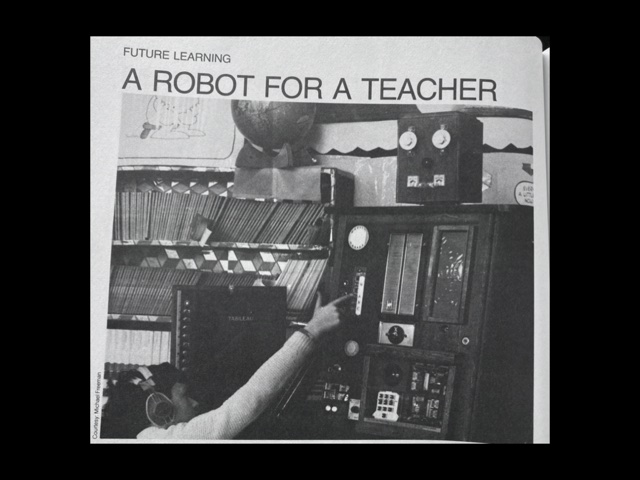 "A Robot for a Teacher" — This section showcases Leachim, a robot created by Michael Freeman to help his wife, a fourth-grade teacher. Leachim's "computer brain is packed with information from seven textbooks, a dictionary, and a whole set of encyclopedias. He knows all the names of all the children in the class, their brothers and sisters, and their parents and pets. He can talk with them about their hobbies and interests. And he can work with up to five students at once, speaking to each of them separately through headsets and showing them pictures on the Tableau screen to his right."

Freeman actually commodified a version of this teacher robot — the 2-XL, an early "smart toy" that played an 8-track tape with multiple choice and true-false questions.

Again, what happens to human teachers in the future?

"Simulations" — "Beginning pilots can use flight simulators to experience takeoff, flight, and landing without ever leaving the ground. A computer-controlled wide-screen film system gives them the impression that they're flying in all kinds of weather and encountering problems that actual pilots face."

Incidentally, the first flight simulator was invented in 1929. So it's not that the prediction about simulations isn't a good one; it's that to say that this is "the future" is just so historically inaccurate. 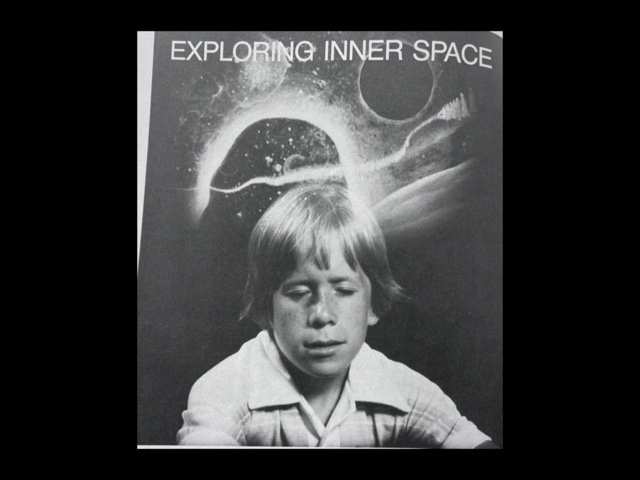 This is arguably the weirdest one. The future of learning will be imaging exercises, according to The Kids' Whole Future Catalog, arguably akin to the "mindset" and "social emotional learning" craze of today. Students of the future will learn and work through their dreams, create dream journals. Students will work with all their senses, including psychic experiences. This section includes Masuaki Kiyota, a Japanese psychic known for "thoughtography" — that is, taking pictures of what's in the mind — and Uri Geller, the Soviet psychic would could bend spoons with his mind. Both have since been found to be frauds (although in fairness to Geller, I suppose, he's now described as a magician and not a psychic.) In the future, students will practice clairvoyance, precognition, and telepathy — ironically, these are the sorts of things that surveillance ed-tech like proctoring software promises too. 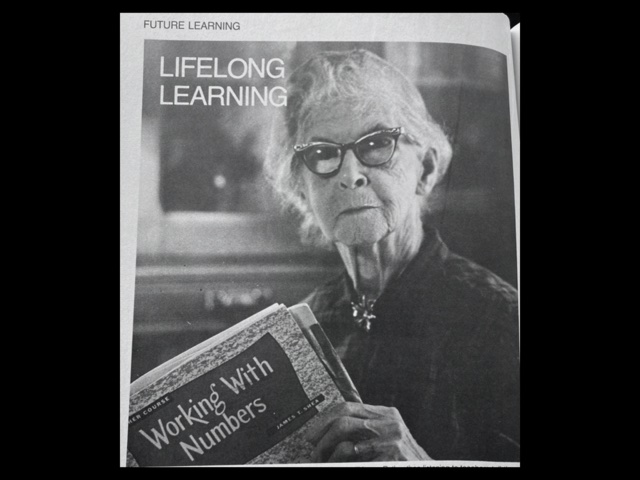 "Lifelong learning" — "When will you finish your education? When you're 16? 18? 22? 30? People who are asked this question in the future will probably answer 'never.' They'll need a lifetime of learning in order to keep up with their fast-changing world. Instead of working at the same job until retirement, people will change jobs frequently. In between jobs, they'll go to school — but not to the kinds of schools we know today. Grade schools, high schools and colleges will be replaced by community learning centers where people of all ages will meet to exchange ideas and information."

Retirement, according to this section, will happen at age 102. No indication if death occurs at the same time.

A bit of a side-note here: I started down a rabbit hole yesterday, searching for the origins of the phrase "lifelong learning," because once again it's become a phrase you hear all the time from pundits and politicians. It struck me as I was re-reading The Kids' Whole Future Catalog to prepare for class tonight that this push for "lifelong learning" in the 1980s might be connected to Reaganomics, if you will — to the need for job training in a recession, to restrictions to Social Security, to anti-unionization efforts, and to the corporations' lack of commitment to their employees. What then might we make of the ed-tech imaginary when it comes to "lifelong learning" then or now: where did these ideas come from? Who's promoting, who's promoted them? Interestingly, one of the popularizers of "lifelong learning" was UNESCO which promoted "lifelong education" in its 1972 Faure Report. A competing vision of the future of work and education was offered by the OECD. There's a much longer story here that I'll spare you (for now. I'm going to write an essay on this). But it's worth thinking about how powerful organizations push certain narratives about the future — narratives that support their policy and political agendas. (These are the same folks who like to tell you that "65% of children entering school today will eventually hold jobs that don't exist yet" — a claim that is, quite simply, made-up bullshit.)

The Kids' Whole Future Catalog feels a lot like made-up bullshit too. But I don't think that means it's unworthy of critical analysis. Indeed, invented narratives are often rich sources to study.

You can chuckle, I suppose, that a 1982 children's book — "a book about your future" — might be intertwined with narratives and ideology. I admit I wonder who else might have had this guide on their bookshelf. Marc Andreessen, the developer of the first Web browser and now a venture capitalist, was born the same year as me. So was Elon Musk. Larry Page, the co-founder of Google was born in 1973. So was his co-founder Sergei Brin. Jack Dorsey, the CEO of Twitter, was born in 1976. His co-founders, Evan Williams and Biz Stone were born in 1972 and 1974 respectively. Sal Khan, the founder of Khan Academy, was born in 1976. That is to say, there's quite a number of technology entrepreneurs — some with more or less connection to ed-tech — who were raised on a future of learning involving robot teachers and pseudoscience. And that's just tech entrepreneurs. That's not including politicians or filmmakers or professors born in the early 1970s.

Other generations had other touch-points when it comes to the "ed-tech imaginary." 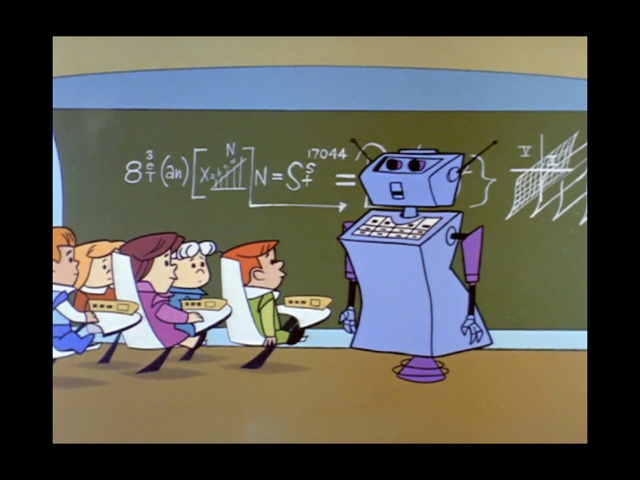 The Jetsons aired an episode with a robot teacher in 1963. 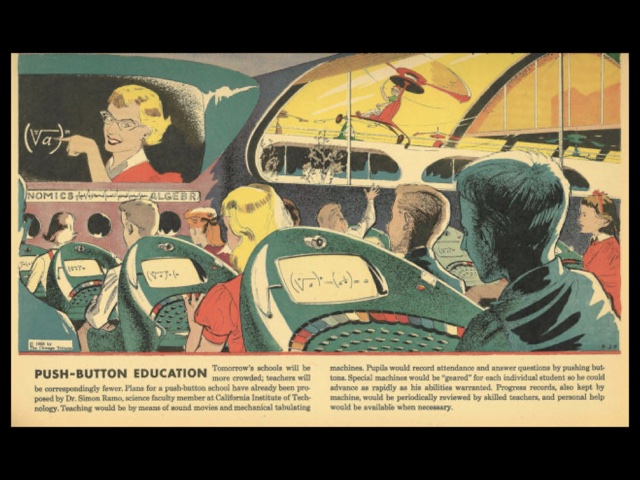 A comic featuring "Push-Button Education" appeared in newspapers in 1958.

Thomas Edison predicted in 1913 that textbooks would soon be obsolete — replaced, surprise surprise, by the films like he himself was marketing. 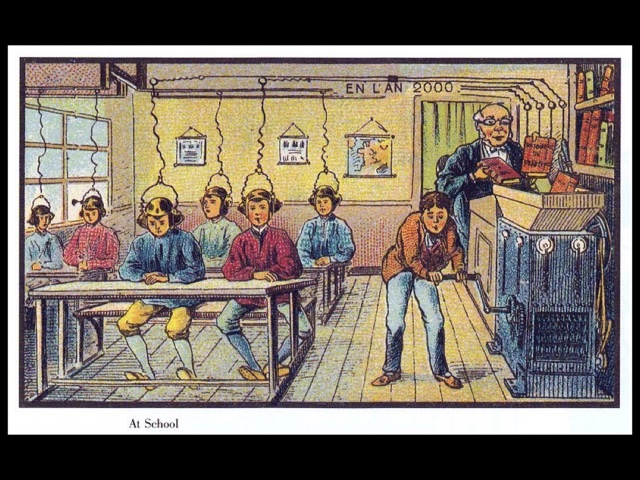 To commemorate the World's Fair in Paris in 1900, a series of postcards were printed that imagined what the year 2000 would look like. One of these featured the school of the future — boys, wearing headsets, seated in rows of desks. The headsets were connected by wires to a machine into which the teacher fed textbooks. The knowledge from these was ostensibly ground up as another student turned the crank on the machine and then transmitted to the students' brains.

And you can laugh. But this notion that we can send information through wires into people's brains is probably the most powerful and lasting idea about the future of learning: 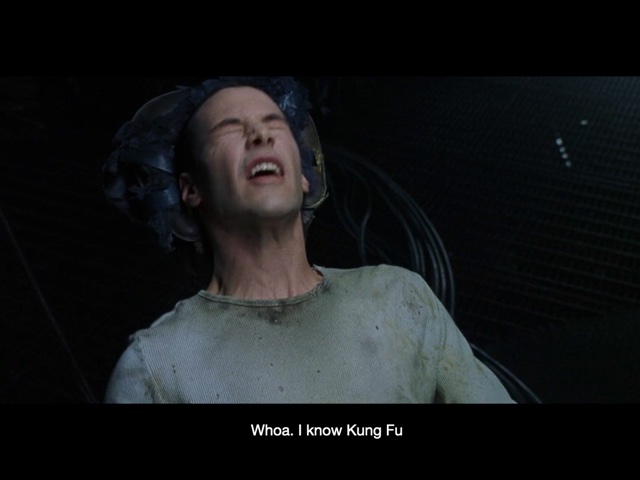 Think of that scene in The Matrix, where Neo, plugged into a machine so he can be fed educational programming straight into his brainstem: "Whoa. I know Kung Fu."

How many folks think this is what ed-tech is striving for, what the future of learning will be like? 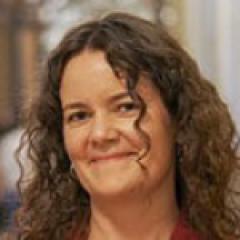 Audrey Watters is a journalist specializing in education technology news and analysis. She has worked in the education field for the past 15 years: as a graduate ...
Author Profile
Quick Search
Sign up for NEPC Emails