TIMSS[1] has become one of the two most influential international testing programs in the world today, the other being PISA. First introduced in 1995, TIMSS is conducted every four years to assess math and science learning in fourth and eighth grade. It has had significant impact on math and science education in the world over the last 20 years. Its impact on the U.S. education policies and practices over the last two decades cannot be overstated. According to the TIMSS 2015 Encyclopedia:

In the late 1990s, when the results of the Third International Mathematics and Science Study were released, TIMSS became a standard policy citation to emphasize that US student performance in mathematics and science was not leading the world. Between 1999 and 2002, state and national educational reformers across the country regularly used the results of TIMSS 1995 and TIMSS 1999 to make this point in editorials and articles.i During these years, more than three dozen congressional statements, debates, and bills cited TIMSS results to justify passing specific education bills, or to call for reforms in education to keep the United States internationally competitive.

So after 20 years of learning from TIMSS, what has the U.S. achieved? (All data from TIMSS publications.)

The gap in scores remains.

In terms of test scores, the U.S. has certainly improved, but so have other countries. So the gap between U.S. students and East Asian students remain as large as 20 years ago (Figs 1 & 2). 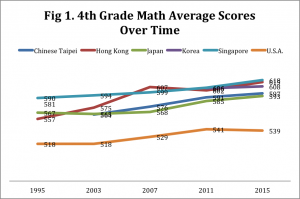 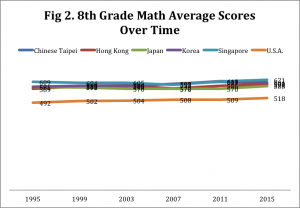 As test scores went up, students’ confidence and attitude toward math came down.

While both students in the U.S. and East Asian education systems all improved over the last two decades, their confidence in math declined. Likewise, not as many students valued math in 2015 as in 1995. Figures 3, 4, and 5 capture this trend[2]. 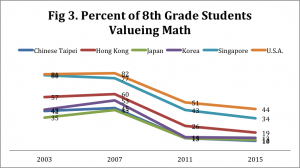 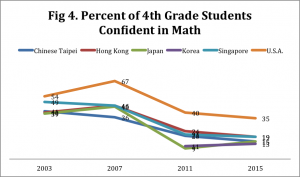 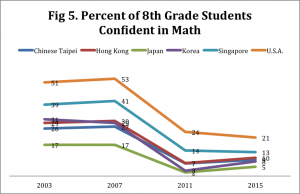 But the U.S. still has more students reporting confidence in math and valuing math than East Asian students.

More students in the U.S. reported having more confidence and valuing math more than students in East Asian countries in 20 years ago. It is still so despite the global decline.

U.S. seems to have learned all lessons suggested by TIMSS but …

Two of the biggest lessons from TIMSS for the U.S. were curriculum and teachers. It was suggested that the high performance of East Asian education systems, Singapore in particular, was the result of a much better curriculum and better teachers.

The U.S. has been benchmarking its curriculum against the high performing systems. The Common Core is just one example, after many states tweaked their math curricula. As a result, the 2015 TIMSS results suggests that U.S. is on par with East Asian education systems in terms of the percentage of students taught the TIMSS Math topics in both 4th and 8th grade. In some cases, the U.S. has better coverage than its East Asian counterparts (Figures 6 & 7). 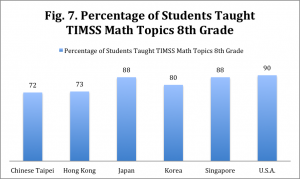 It was also suggested that East Asian teachers are better prepared (with higher degrees) and more specialized (majored in math). The U.S. has been working on these two areas too. In 2015, the U.S. has more students taught by teachers holding advanced degrees than East Asian education systems (Figures 8 & 9). 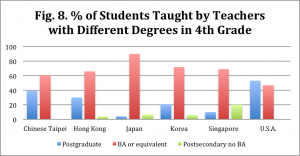 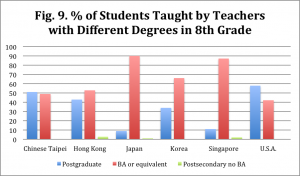 In terms of majoring in math, the picture is mixed. In 4th grade, for example, the U.S. had about the same percentage of students taught by teachers with both majors in education and math as Japan and Korea, but significantly lower than Singapore, Hong Kong, and Chinese Taipei. In 8th grade, the U.S. had more students receiving teaching from teachers with both Math and Math Ed majors than Korea and Chinese Taipei. The U.S. had more students taught by math majors without math education major than all East Asian systems (Figures 10 &11). 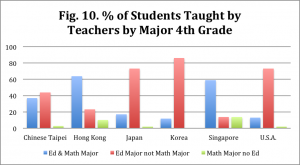 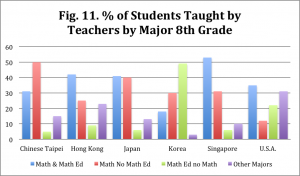 But the data does not necessarily suggest majoring in math produces better scores in the students. The picture is very mixed. For example, in 4th grade, students taught by teachers who majored in primary education and math actually received a lower score (537) than those whose teachers just majored in education (540), although the difference is not significant. The same pattern holds for Singapore, Japan, and Hong Kong. In 8thgrade, U.S. students whose teachers majored in both Math and Math Education scored higher than either those students whose teachers only majored in math but not math education as well as those only majored in math education but not math. This situation is similar in Singapore, Korea, and Chinese Taipei, but not true in Hong Kong and Japan, where teachers with math majors without math education major produced the highest scores.

Can we ever catch up? Is it necessary to catch up?

It seems clear that after tremendous efforts to catch up to the high performing education systems in test scores, the U.S. has not succeeded. Two questions arise. First, can the U.S. ever catch up? Second, is it really necessary to catch up? My answer to both questions are no. Interested readers can read my books Catching up or Leading the Way: American Education in the Age of Globalization and World Class Learners: Educating Creative and Entrepreneurial Students.

Is it worth the cost?

While test scores went up in math in both the U.S. and East Asian countries, more students lost confidence in math and valued math less. If it is true that whatever policies and practices that resulted in higher test scores also make students less confident and less interested in math, are these policies and practices really educationally sound? Don’t we want more people have confidence in math and value math?

How much does curriculum matter?

The U.S. has “fixed” its curriculum but has not narrowed the gap. All the efforts that went into fixing the curriculum did not produce the results promised by those who adamantly believed and argued that American schools have lower standard and fragmented curriculum. Was the diagnosis wrong? Does curriculum and standards really matter that much?

Should we keep “fixing” American teachers?

TIMSS and other international tests have resulted in waves of teacher bashing in America, suggesting that they are less qualified and less mathematically knowledgeable than their counterparts in East Asian education systems. Bashed have also been teacher education programs in the U.S.. But the data does not really support the blames. Perhaps American teachers are great at doing something more important than simply raising test scores.

I have questioned the value of international tests, and for that matter any standardized test, for improving our children’s education in many places. Test scores simply do not reflect what our children need to live in the future, let alone what they need to defend and improve a democratic society. Test scores are simply the indicator of one’s ability in taking the test. We should never read too much into it and attempt to draw conclusions that fuels actions that could affect the future of millions of children and the future of our society.

I have also raised questions on many occasions about copying policies and practices from other systems. It is not to say that we cannot learn from others. But education is both deeply rooted in and an integral part of culture, hence they mutually enhance and perpetuate, as I have argued in my book Who’s Afraid of the Big Bad Dragon: Why China has the Best (and Worst) Education System in the World. Different cultures impose different values and expectations on education. Different cultures also support and suppress different educational practices. Unless one is ready and able to redefine one’s culture and society, copying isolated educational policies rarely works.

The lesson from all these: Stop copying others’ past and start inventing our own future.