2014 will become known as the "Summer of Hate -- For Teachers Unions."

Here in the steaming days of early August, the anti-union, anti-teacher, anti-tenure forces are whipping themselves into a froth over the idea that a school district might have to give a senior teacher a reason for not renewing her contract. Inspired by the widely broadcast inanities of Campbell Brown, a raft of celebrities are taking to the airwaves in the apparent hope of clogging up our courts with wrongful dismissal lawsuits against public schools.

Let's survey the damage. We'll start with Campbell Brown's new partner and the man most responsible for the war in Iraq*, David Boies.

Joe Scarborough and Mike Barnicle, speaking for the Village establishment, are blown away that a "liberal" icon like Boies is getting behind an anti-union jihad against tenure. I guess they haven't heard other "liberals" like Rahm Emanuel and Andrew Cuomo and Dannel Malloy and Arne Duncan and lord knows how many other neo-libs have been spouting reformy nonsense for years. Boies has a well-known school privatization pedigree; getting him to lead this foolish lawsuit to overturn New York's tenure laws is hardly a big surprise.

But if Boies puts forward the arguments during the trial he puts forward here, there's no way he can win the case on its merits:

Apparently Boies has never heard that race and economics go hand-in-hand in America, which means our schools remain highly segregated. But let's give Boies credit for acknowledging the real problem we have with schools in this country is that they remain separate and unequal. So how does abolishing tenure -- which is found in both affluent and less-affluent schools -- do anything to ameliorate this problem?

As so many educators and researchers have pointed out so many times, the vast majority of the variation in educational outcomes can be explained by factors outside of schools. Teacher effects explain no more than 15 percent of test-based variations; school effects no more than 20 percent (other studies show even smaller effects).

Our schools have become factories for social reproduction, and if they produce unequal outcomes, it is because our society has dictated that they should do exactly this. Children who come into schools with grossly unequal backgrounds cannot be expected to perform equally well on racially and culturally biased tests, no matter how often old, rich, white men sit around a TV studio and try to convince themselves otherwise.

Oh, by the way: none of this has anything to do with tenure.

At 4:42, Brown makes the claim that teachers are underpaid; yeah, I'm not holding my breath waiting for her lawsuit to fix that. Neo-libs like Boies and Johnny Alter love to make this argument: more money for teachers in exchange for more accountability.

What Brown and Boies refuse to understand, however, is that tenure is a part of a teacher's compensation. When you force a teacher to work in a climate of fear and subjugation, you are making the job less attractive. Where is any proposal from PEJ to make up for this loss? Where is any meaningful policy to raise the revenues necessary to keep qualified people in the classroom when Brown and Boies want to make the job even more difficult than it already is? Where is the plan to provide necessary workplace protections after tenure has been eliminated?

And, again: where is there any evidence that taking away tenure increases student achievement?

At 5:12, Barnicle makes the claim that when schools have layoffs, the younger teachers are cut first, and they are "quite often some of the better teachers." Boise says, "That's right."

Let's be very clear: the notion that less-experienced teachers are better than veterans is completely and utterly wrong. 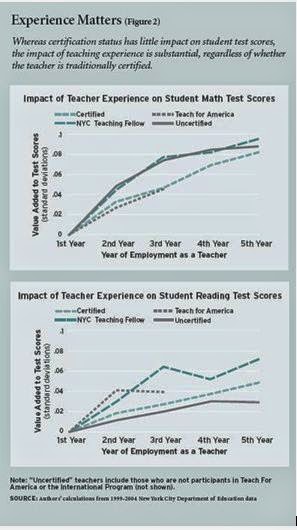 There isn't anyone involved in education policy who disputes the notion that teachers gain in effectiveness the longer that they teach. Barnicle is simply making stuff up off the top of his head (it's not the first time).

Scarborough (interrupting): "Why do they want to keep them out?"

Boies: "Because they view them as competition for people who are already teaching there. I think they're, listen, maybe disruptive in the sense, they have new ideas, enthusiasm... and that's what teaching's about!"

Yes, David Boies can't understand why anyone would want to staff our most difficult schools with young people who've had five weeks of training! I mean, he's had these graduates of elite schools up to his house for a picnic! And on that basis, he's prepared to say they're great teachers! After all, like Boies, they went to the "right" schools, so they're the "right" kind of people...

I'm not going to relitigate the TFA issue again here; suffice to say there's plenty of evidence that TFA is hardly the miracle it likes to claim it is, and even the limited evidence TFA puts forward to justify itself is quite weak.

But even TFA, so far as I know, has never said or implied that experience doesn't matter.Given that more than 80 percent of its members leave teaching after their third year, why would Boise think a policy of replacing experienced teachers with neophyte, poorly-trained, constantly churning, recent college graduates would be good for schools serving at-risk students?

Abolishing tenure so we can staff schools full of at-risk students with inexperienced teachers is perhaps the most inequitable education policy anyone could conceive of -- yet it appears that this is exactly what David Boies wants to do.

Boies says abolishing tenure is "pro-teacher." But I can't think of any profession that shows this level of disdain for its experienced practitioners. Why, then, would Boies make such an illogical argument? I can only guess, but I think it's because he really doesn't care very much to educate himself on the subject. If he did, he would have thought much more deeply about these issues, and he wouldn't go on TV and say self-contradictory nonsense like this:

Scarborough (6:20): "So Randi [Weingarten, President of the AFT] says that tenure laws and other job protections are a bulwark against cronyism, patronage, and hiring based on who you know, not what you know."

The reason cronyism and patronage haven't invaded our schools is because we have workplace protections like seniority and tenure! And if people get teaching jobs based on merit -- which you just said was the case -- then what is the problem?!

Poor arguments based on ignorance are bad enough. But this is even worse: self-contradictory, incoherent nonsense whose only goal is to take away workplace protections for middle-class teachers. And the only reason David Boise is allowed to go on TV and embarrass himself with this foolishness is because he knows there will never, ever be a time where well-informed people who are not famous celebrity lawyers are allowed to sit next to him and call him out on his blather.

* OK, I guess that's a little unfair: Mr. Campbell Brown is at least as responsible for our disastrous foray into Iraq as David Boies.