Regular readers will remember a series of posts I did about LEAP Academy University Charter School in Camden back in 2013. Here's a recap that both recounts the many problems LEAP has had over the years, and gives us an example of the special brand of hubris that characterizes LEAP's founder, Gloria Bonilla-Santiago.

This is a woman whose school, according to the NJEA, "routinely violated state collective bargaining law." LEAP was caught up in an athletic recruiting scandal so egregious the NJSIAA rewrote its rules after finding the school in violation. The school has a history of not meeting Adequate Yearly Progress; even the state acknowledged its elementary and middle school was characterized by "low performance." LEAP failed to file its taxes for three years running, and lost (then regained) its tax-exempt status.

Bonilla-Santiago got quite a bit of attention in 2013, when the Philadelphia Inquirer broke the story that her live-in boyfriend, Michele Pastorello, was also LEAP's "chef," pulling down $95K a year for making such gourmet cuisine as "grilled cheese, tomato soup, and strawberry applesauce." It turns out that keeping Patorello on the payroll while the school switched vendors actually cost LEAP -- and the taxpayers -- a quarter of a million dollars.

That's quite a bit of scandal for just one charter school. But there was one other incident that hasn't been resolved -- until now:

In January of 2013, the Courier-Post published a story about a disgruntled LEAP employee who claimed Bonilla-Santiago made him do work at her home while on the school's time:

An employee of LEAP Academy University Charter School claims in a lawsuit that he was ordered to make repeated repairs to the home of the school’s founder, Gloria Bonilla-Santiago.

Mark Paoli, who was facilities manager at the Camden school for more than a decade, contends Bonilla-Santiago “routinely demanded that he perform work on her home while on LEAP Academy time and using LEAP Academy tools, equipment and supplies.”

The suit contends Paoli was demoted after complaining about his alleged treatment to a LEAP administrator. It also asserts that Paoli, who is white, was replaced by a less-qualified minority, said Alan Richardson, a Woodbury attorney for the LEAP worker.

Among other claims, the lawsuit asserts Bonilla-Santiago in June 2006 allegedly ordered Paoli to repair columns in front of her house, a job that required the hiring of a laborer. Bonilla-Santiago allegedly paid for the labor and supplies “with a check drawn on the Alfred Santiago Scholarship Endowment,” the suit alleges.

According to the suit, Paoli “knew it was unlawful” to make personal repairs while being paid by LEAP. The Audubon man allegedly complained about Bonilla-Santiago’s conduct “on several occasions but was told to keep his complaints to himself or Bonilla-Santiago would fire him,” the suit says. [emphasis mine]

Misusing public funds for private gain is a serious allegation. But no public agency, so far as I've been able to determine, ever followed up with an investigation; this civil lawsuit was the sole legal proceeding on this matter.

I'll bet you've already guessed what happened next: the case never went to trial, and no court ever determined the veracity of Paoli's charges, because the entire thing was settled out of court.

Luckily, New Jersey has a libertarian gadfly named John Paff whose mission is to OPRA (Open Public Records Act) the details of settlements with New Jersey governmental agencies. This week, Paff released the results of his request:

On August 25, 2014, a Camden County charter school agreed to pay $50,000 to its former facilities manager who claimed he was retaliated against for reporting his supervisor's alledged requirement that he make repairs to her personal residence on the school's time and using school resources.

In his suit, Mark Paoli of Audubon said that Gloria Bonilla-Santiago, Ph.D., the chief operating officer of the LEAP Academy University Charter School, required him to perform maintenance on her Voorhees home over a ten year period while Paoli was supposed to be working for the school. Paoli's complaint listed several tasks, ranging from replacing light bulbs and fixing leaks to powerwashing her deck and picking up a picture frame and delivering it to her home. Paoli's lawsuit claims that a laborer he needed for one task was paid for with a check drawn on the Alfred Santiago Scholarship Endowment.

Paoli claimed that his complaints to school administrators, including Business Administrator Pasquale Yacovelli, caused him to receive a poor evaluation, a cut in pay and ultimately replacement by a less-qualified person.

None of Paoli's allegations have been proven or disproven in court. The settlement agreement resolution expressly states that the $50,000 payment does not constitute an admission of wrongdoing by LEAP or any of its officials. All that is known for sure is that LEAP or its insurer, for whatever reason, decided that it would rather pay Paoli $50,000 than take the matter to trial. Perhaps the defendants' decision to settle was done to save further legal expense and the costs of trying what were in fact exaggerated or meritless claims. Or, perhaps the claims were true and the defendants wanted to avoid being embarrassed at trial. This is the problem when cases settle before trial--it is impossible to know the truth of what really happened. [emphasis mine]

I'm hardly a libertarian, but Paff gets it exactly right here: now that Bonilla-Santiago has settled her case, taxpayers will never get the full story about whether or not she abused her position at LEAP, a taxpayer-funded school.

I will be the first to say that public school districts are too often beds of corruption and malfeasance; look only at the example of whistleblower-teacher Mike Mignone of Belleville if you need proof (and also a good reason why we need tenure for teachers). But imagine if Bonilla-Santiago had tried to get away with this as the superintendent of a public school district. Does anyone think the public would have been content with simply accepting an out-of-court settlement as the final word on this matter?

Yes, there have been superintendents who have had too cozy relationships with their boards. But those boards are subject to oversight from the state and political pressures from constituents. The fact that we know about the malfeasance that occurred in Toms River and Elizabeth and Wall and other places is testament to the fact that those school districts had checks and balances.

Where are those checks and balances for a charter school like LEAP? Who gets to demand that Bonilla-Santiago explain herself to the taxpayers who fund her school? Who gets to say: "No, a settlement is not good enough; we want the truth."

An incident like this underscores a reality that charter cheerleaders prefer to ignore: charter schools are not state actors, and are therefore not held to the same standards of transparency and accountability as public schools.

It's little wonder that Wall Street loves charter schools like LEAP: they simply can't do any wrong. So long as powerful politicians are there to protect them, these charters will continue to grow and thrive, no matter what their leaders may be up to.

And don't expect to know what exactly what that may be. 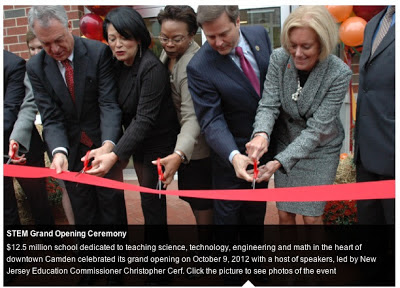 Can do no wrong, apparently.