Mike Klonsky’s SmallTalk Blog: Trump Orders DeVos To Do a Study. Why? 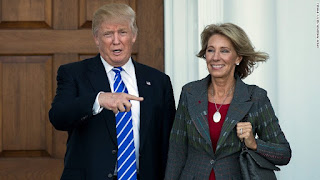 This raises some obvious questions. First, why does the president need an executive order to make his hand-picked ed secretary do a study? Can't he just pick up the phone and say, "Hey Betsy. Get one of your peeps to knock out a study for me by next week showing... blah blah blah"?

Secondly, why do they even bother calling it a "study" when the conclusions are known in advance? I know what you're thinking: Klonsky, stop being naive. This is the nature of education research these days.

Yes, you're right, with some exceptions (Congrats Kevin Welner). That's why we need to look at all research with a critical eye--especially studies coming from contracted think-tanks and university centers. But this Trump-ordered study is farcical on its face, although the topic of federal overstep is worth talking about.

No Child Left Behind was clearly federal overstep, with Bush's D.O.E. leveraging its relatively small amount of federal dollars to mandate overuse of standardized testing. The same can be said for Arne Duncan's Race to the Top, which imposed massive school closings, teacher/principal firings and the unrestrained growth of privately-run charter schools on local school districts.

But clearly, those aren't the target of Trump's executive order. What he's aiming at are the system's already dwindling civil rights protections.

Obama’s Education Department was notably aggressive on civil rights in schools, not only in directing schools to allow transgender students to use the bathrooms matching their gender identity, but also in pushing for school-discipline reforms and in pushing colleges to overhaul their handling of sexual assaults on campus.

Those efforts, coupled with the department’s sometimes wide-ranging investigations into thousands of complaints of alleged discrimination against students nationwide, also led to complaints of federal overreach in some quarters. But advocates who welcomed the attention on civil rights fear that the Trump administration’s campaign to shrink the federal role in education will translate into weaker protections for vulnerable students.

The only thing I would disagree with here is this praise for Obama's Ed Dept's "aggressive" stand on civil rights. My take is that Arne Duncan's D.O.E. was halfhearted in its enforcement of federal law and that Duncan, despite his oft-repeated claim that school reform was the "civil rights issue of our time," didn't do nearly enough.

I'm thinking here, about the time when Duncan undermined Obama's Justice Dept. just when Atty. General Eric Holder was about to take legal action against Louisiana's voucher program which discriminated against minorities. Duncan pressured Holder to pull back his federal lawsuit for fear it would interfere with "choice" (charters and vouchers). Duncan also admitted that he was opposed to "forced integration."

But forced integration was exactly what much of civil rights law was all about -- as opposed to forced segregation. Rather than federal overstep, what we saw from Duncan's D.O.E. was federal conciliation with racists and school segregationists such as then-Sen. Jeff Sessionsand then-governor of Louisiana Bobby Jindal.

Trump's latest executive order is aimed at eliminating what's left of Brown v. Board of Ed and the rest of existing civil rights oversight of public education.