Among media, political, and public claims driving calls for education reform, two beliefs are dominant: (i) education is the single most important lever for lifting anyone above the circumstances of her/his birth, and (ii) teacher quality is the single greatest factor in whether that educational experience accomplishes the first belief.

As I have increased my contribution to public debates about education reform, I have witnessed that media, political, and public comments are often knee-jerk and simplistic either/or responses to complex research.

For example, when I note that 40 years of research reject grade retention, responses tend to discount that research with “So you want us just to pass them on?”—suggesting that social promotion is the only alternative to grade retention (which, of course, it isn’t). Similarly, when I share that 60 years of research on corporal punishment also refute spanking—that, in fact, there is no debate on its use—responses immediately include, “So we are just supposed to let children do whatever they want?”

But I have also discovered that in my education courses, students challenge many research-based conclusions, although the students are more thoughtful—particularly when I share the evidence on the impact of education and teachers [1].

Consider the follow body of evidence below; and then, in the context of this evidence, I want to unpack what education and teacher impact actually entails.

But in the big picture, roughly 60 percent of achievement outcomes is explained by student and family background characteristics (most are unobserved, but likely pertain to income/poverty). Observable and unobservable schooling factors explain roughly 20 percent, most of this (10-15 percent) being teacher effects. The rest of the variation (about 20 percent) is unexplained (error). In other words, though precise estimates vary, the preponderance of evidence shows that achievement differences between students are overwhelmingly attributable to factors outside of schools and classrooms (see Hanushek et al. 1998; Rockoff 2003; Goldhaber et al. 1999; Rowan et al. 2002; Nye et al. 2004).

Also consider Donald Hirsch’s research on the UK for the Joseph Rowntree Foundation: “Just 14 per cent of variation in individuals’ performance is accounted for by school quality [emphasis added]. Most variation is explained by other factors, underlining the need to look at the range of children’s experiences, inside and outside school, when seeking to raise achievement.”

Now, what is the evidence on social mobility in the U.S., notably in terms of how educational attainment influences the relationship between social class or race and that mobility? 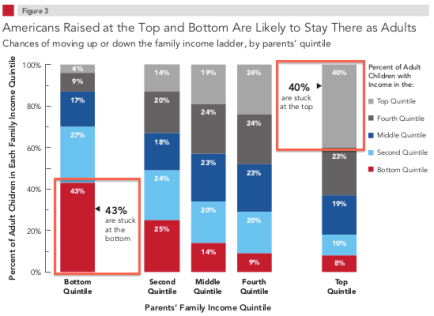 From Pew’s Economic Mobility Project data; analysis by Bruenig, 2013, June 13: “As far as income mobility goes, you are 10x more likely to wind up in the richest fifth as an adult if you were born there than if you were born in the poorest fifth.”

And thus, social mobility appears more strongly connected to the social class of a person’s family than to education (a function of combined school and teacher quality):

From Pew’s Economic Mobility Project data; analysis by Bruenig, 2013, June 13: “[Y]ou are 2.5x more likely to be a rich adult if you were born rich and never bothered to go to college than if you were born poor and, against all odds, went to college and graduated.”

The consequences of the dynamic between social class and education are, as Matt O’Brien explains, as follows:

Now, consider the relationship between educational attainment and race. First, in Closing the Race Gap, O’Sullivan, Mugglestone, and Allison (2014) detail that blacks with some college earn about the same as whites with no high school diploma: 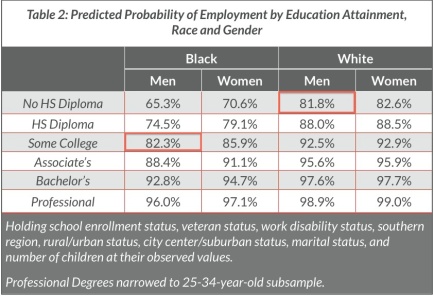 From this report as well, Susan Adams explains: “African-American college students are about as likely to get hired as whites who have dropped out of high school.”

Bruenig (2014, October 24): “First, understand that blacks and Hispanics have lower incomes than whites up and down the educational spectrum. On average, black families at a given level of educational attainment receive incomes that are just 66% of what white families at the same level of educational attainment receive. For Hispanic families, that figure is 79%. Naturally, when education-controlled income disparities like this exist, education-controlled wealth disparities will exist.”

The impact of education (school and teacher quality), then, when placed in the context of both social class and race refutes the opening claims: (i) education is the single most important lever for lifting anyone above the circumstances of her/his birth, and (ii) teacher quality is the single greatest factor in whether that educational experience accomplishes the first belief.

When I offer these measurable facts to either the public or my students, often I hear: “So you are saying that education and teachers do not matter?”

Here is the hard part.

Part of that problem is that the impact of any person’s education or the influence of any teacher or teachers tends to occur over long periods of time, and we are hard pressed to tease out and measure specific teachers or practices since that impact is cumulative, interrelated, and multi-faceted (consider that a student can learn a valuable lesson from a flawed lesson or a weak teacher).

Our first conclusion, then, is that making claims about education being the single or sole factor in success or that the teacher is the single most important factor in achievement is misleading, overly simplistic.

But, there are fair and accurate claims we can make about the importance of education, leading to our second conclusion.

Our second conclusionis that within social class and race, educational attainment has significant influence, but that education alone appears less effective in overcoming large social inequities such as classism and racism.

From this, I think we have several important lessons:

Let’s be clear: Education and teachers matter. But, regretfully, they simply do not matter in the ways most people claim or believe, and certainly not in ways that are easy to identify.

The good news, however, is that there is much we can do to change this, if we have the resolve to confront the evidence, accept the ugly truths, and then to do something different.

[1] This post is in debt to my current, fall 2014 EDU 111 course at Furman University, a group of students fully committed to engaging with the topics, challenging claims, and seeking to understand the complexity of education. They are proof that teaching is an act of learning, if the teacher is there to listen as well as talk.