Jersey Jazzman: What Our Latest Analysis of One Newark Means

Step #1: Bruce Baker and I wrote a report this past January about the Newark Public Schools restructuring plan, One Newark. This controversial scheme calls for closing some schools, "renewing" others -- basically, firing the entire staff and making them reapply for their jobs -- and turning over others to charter management organizations like TEAM Academy (the Newark branch of KIPP), and North Star Academy (The Newark branch of Uncommon Schools). Other schools survive unscathed.

Step #2: Earlier this month, Bruce and I were joined by Joseph Oluwole in a second brief on One Newark. This time, we looked at the consequences for staff.

Step #3: At just about the same time we released our second brief, NPS responded to our first brief. In the interests of fairness, I won't try to summarize it here. Go read it -- it's not long.

Step #4:Today, Bruce and I responded to NPS's response. Let's me lay this out in layman's prose as best as I can:

So that's where we are right now. Maybe NPS will respond; maybe we'll respond right back. But let me say the following before this goes any further:

Why should a couple of education researchers have to pry the secrets of One Newark from the state-run school district? Why hasn't State Superintendent Cami Anderson publicly released the models used to determine why specific schools were targeted under One Newark?

It seems to me that, at the very least, the staff, families, and students at the schools affected by One Newark deserve some transparency. If you're going to turn over a public school to a charter company, you at least owe the families of that school's students an explanation of the thinking that went into the decision. Not platitudes, not reverse-engineered rationalizations, but a straight-up accounting of how you came to the conclusion that you did.

If you're going to force a teacher of color, who has been working in one of the toughest assignments in the district, to reapply for her job while her white colleagues are safe, you at least owe that teacher an explanation as to why she is being targeted and others are not.

If you're going to "divest" a district asset in a nebulous deal with the defense that it will lead to better student outcomes, you at least owe the taxpayers an explanation as to why you think this particular school will do better under this particular charter operator, and why "divesting" the property is a good deal for Newark's citizens.

Bruce and I do this work because this is what we do; I am challenged by this sort of analysis and am grateful for the opportunity to present it publicly (I think I can speak safely for Bruce on this point).

But it seems to me that we could save ourselves and everybody else a whole lot of time and bother if NPS would just explain to us in a clear, concise way how they came up with this plan.

Assuming, of course, that's even possible... 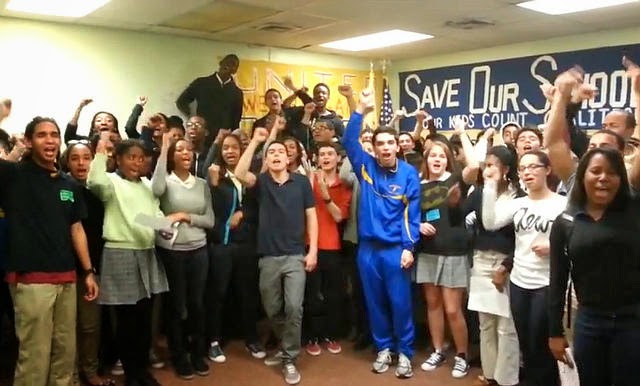 Newark's students, looking for an answer. Will they find it?