So, at the first glance, it looks like B4K is up to their old tricks again: putting money from billionaires David Tepper and Alan Fournier into local politics under the guise of education reform. They've done it before in Jersey City and Perth Amboy; now it's Trenton.

But hang on -- something seems different...

A billboard linking Jackson to former convicted Mayor Tony Mack appeared Friday on Route 129 near Route 1, and attack mailers with the same message were sent out to residents paid for by Better Education for Kids.

“Eric Jackson endorsed Tony Mack. Eric Jackson worked for Tony Mack,” the billboard reads with “Same Old Trenton” written in big letters underneath with a link to a website continuing the assault on the former city public works director.

In fine print after the New Brunswick’s organization and address is identified, it states “not made with the cooperation or prior consent of, or in consultation with, or at the request or suggestion of any candidate or committee.”

But the group was founded by billionaire hedge fund manager David Tepper, who is tied to campaign donations to mayoral candidate Jim Golden.

Tepper is not alone in his support for Golden.

An outreach coordinator with Better Education for Kids, Gerard Green, posted pro-Golden literature on his Facebook page, with the most recent coming on Friday afternoon.

Green could not be reached for comment and the number for the nonprofit was disconnected. [emphasis mine]

"Disconnected"?! Talk about burying the lede.

When I found this out, I went right to B4K's website to see if they had acknowledged Bradford's departure. Weirdly, Bradford's bio is still on the site, although he's off the staff listing page. Maybe that's a mistake borne from the site being remarkable quiet: while you'll find a few cut-and-pasted repostings of writings by Rick Hess, Laura Waters, and other reformy all-stars, I couldn't find an original piece on the site's opinion page since last year. The opening slate links to a Star-Ledger editorial from 2011.

B4K's social media presence has also gone dark. Their Facebook page's last entry is over six months old; their last tweet is from 2011. As I've noted before, B4K's work rate has never been very high. But this is a new level of torpor.

I really have no idea how long it takes to make and buy space for a billboard. Maybe B4K is in stealth mode, working hard behind the scenes to influence races and unconcerned with their public face.

Maybe, on the other hand, this ad was already in the works when Bradford left -- a final gasp of life. Or is Tepper is keeping the group a shell of its former self, ready to disburse soft money when he wants to, but inactive otherwise? You don't need a working phone for that.

I hope a reporter picks this up. When B4K first came on the scene, the preferred story from establishment types like Tom Moran was that Tepper and Fournier's money was going to break the back of the evil NJEA. 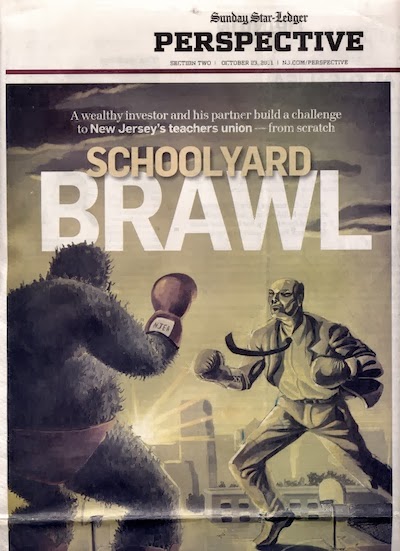 Are the gloves still laced up? Will B4K be as active again as they once were? Will they really attempt to match the NJEA in terms of their influence?

Or is B4K winding down?