Gary Rubinstein’s Blog: What’s Next at TFA? So Maybe We’ll Back Down a Smidgen

The fact that this year’s event did not have an alumni ‘reformer’ leader making a keynote speech is telling that TFA is likely realizing that getting too cozy with people like Huffman who vilify teachers may be too risky.  Instead the introductory keynote was by the executive director in St. Louis Brittany Packnett, who was very involved during Ferguson and was even appointed to a Presidential Task Force of how this country can learn from the injustices that happened there.  Packnett gave a sincere speech in which she reminds us that we cannot ignore poverty and that Teach For America needs to evolve so that their teachers can better serve the students they will teach.

Though I do think TFA does much more harm than good, I can admit that they do some good and I support the social justice efforts in their regions.  Recently TFA was blasted by Michelle Malkin for using tax payer money to fund their left-wing activism.  As this is one of the good things that TFA does, I definitely did not agree with this point of view.  I also don’t need amateur TFA critics tainting the pristine body of valid criticisms that I’ve been writing about for the past few years.  I don’t need to get lumped in with her in the future when TFA uses her as an example of how misinformed and insensitive TFA critics can be.

The next hour was a carefully scripted back and forth between co-CEOs.  I’m always intrigued by these two.  In 2011, while Wendy Kopp was still sole CEO, Kramer and Villanueva-Beard  made about $600,000 between them for their old positions.  I can only surmise that now that figure is closer to $800,000.  You’ve got to admit is is kind of bizarre that you have co-CEOs of a $300 million a year company and one lives in Houston and the other in Minnesota while the corporate headquarters of TFA are in New York City.  What is it they bring to the table that makes this a good use of the TFA money, as abundant as it might be?  Well, there is one thing that TFA certainly gets from this arrangement.  Whereas before you had a specific leader, someone you could like or not like, someone you could credit or blame.  Now they have two people, both very timid public speakers.  I don’t think anyone really thinks they are more than mere puppets so they are not really targets of any criticism.  Before you could accuse Wendy Kopp of talking out of both sides of her mouth at times.  Now there are literally two mouths so one can be expressing one idea and the other can be doing another and they can never be accused of being ‘a hypocrite.’  I doubt that this hedging the bets thing was the reason for this co-CEO arrangement, but it has given TFA this new dynamic which can make them more immune to criticism.  Kramer and Villanueva-Beard:  Which is the Yin and which is the Yang?   Which is your buddy and which is your enemy?  Which is Rosencrantz and which is Guildenstern?

Kramer spoke first, and the first surprising thing I learned is that even though Kramer is from a family of charter school zealots in Minnesota, his grandfather, Aaron Maloff, was a New York City superintendent and also a former principal of Jamaica High School.  Now Jamaica High School was recently shut down as a final part of the Bloomberg administration process of breaking up large schools.  I wonder how Maloff felt about this.  We’ll never know since he died at 96, about six months ago.  It is kind of strange to me that I never heard about this prominent public education supporting ancestor of Kramers until, conveniently, when it is too late for me track him down to see what he thinks about what the ‘reformers’ have done to his school.  Have no fear:  As soon as I find my trusty Ouija board, I’ll find out.

Kramer says that when working on his grandfather’s eulogy, he came across an article (presumably this one) from 1977 in which an AFT spokesperson said in an article about school discipline, “Students who run amok at home will also run amok at school,” and Kramer uses this to subtly bash the union, saying “Forty years later, too many people in America still don’t believe that students from every community can succeed academically, but in our community, we know the truth.  Today, there are hundreds of schools and thousands of classrooms in urban and rural communities across this country where kids have the opportunity to get an excellent education, and more and more kids are getting it done.”  Of course there are way more than ‘hundreds of schools … where kids have the opportunity to get an excellent education.  Maybe what he means is that there are a small group of miracle schools whose standardized test scores are proving that ‘great teachers’ can overcome all external obstacles that prevent kids from meeting their potential?  That’s how ‘reformers’ used to describe things.  But wisely Kramer does not commit himself to a specific school since so many miracle schools have been debunked over the years for playing various games to achieve high test scores.

We also learn from Kramer the dire state of TFA recruiting.  While two years ago TFA had about 6,000 new corps members, he says about the new group just that there are “more than 4,000″.  Of course “more than 4,000″ can mean a lot of things, but I get the sense that it is less than 4,500 since he’d likely say “nearly 5,000″ if it were.  This is about a 30% decline in just two years.  He sounds a bit like a PBS fund raiser when he makes a dramatic plea for people watching the webcast to refer people to apply.  Just like TFA, never looking to what might be causing the decline in TFAs reputation and instead focusing on fixing the effect without addressing that cause.

Villanueva-Beard is much more careful in her speech this year especially compared to last year’s fiasco where she attacked the ‘status quo’ and ‘low expectations’ in a cartoonish Michelle Rhee circa 2010 style.

She addresses frustrated alumni for the first time:

Alumni — you need to feel like you are part of a community and a movement.  You need to know that your work — whatever path you choose — is valued by this organization, and you need opportunities to engage in the various supports that we offer.

You also need to feel valued and respected by fellow alumni.  Listen, we all have our own principled views on the best pathway to One Day, but we can learn from each other, disagree respectfully, and still be united in the fierce belief we have in our children.

Well I certainly don’t feel valued by this organization, particularly after Villanueva-Beard un-followed me on Twitter last year.

But she also spews the Bill Gates education agenda, though in friendlier sounding terms, for example:

As we look at academic outcomes, we’re asking every one of our 52 regions to know if students in our classrooms are on a path toward college readiness, and know how our teachers’ are doing as they perform alongside their peers.  We’ll do this by using locally-relevant test scores and third-party studies.

Unfortunately those ‘third-party’ studies are usually funded by Gates.

Villanueva-Beard does, however, let her guard down when addressing critics when she says: “We want this year to be the year that the Teach For America community stops feeling bad about feeling good about our contributions.”

Of course TFA recognizes a good sound bite and their graphic designers quickly got busy to make it into a twitter bumper sticker: 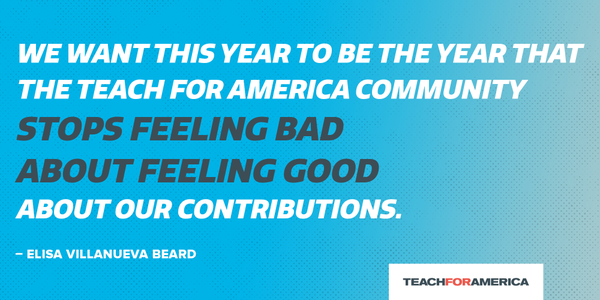 When exactly was there a year when TFA was feeling bad about feeling good?  Come on.  They’ve always felt good about every one of their ‘contributions’ and they will continue to do so no matter what critics say.  This is not much different, in spirit, from the ‘We won’t back down’ mantra from the previous year.

In general, though, the messages in the two speeches this year were better than last year’s.  There is a lot of talk, for example, of collaboration with the community, and also some sincere sounding “we need to do better” at several things.  “We need to recognize our strengths, our mistakes, and our opportunities for improvement, and recognize the same things in our partners, knowing that we each have an important role to play.  We do not have a chance to reach our shared aspirations if we do not get better at this.”  This is a more humble sounding TFA.

Whether this is just a new communications strategy to reverse the declining popularity of TFA in recent years or something they really believe, I don’t know.  Even if they are just saying some of these things to make critics a bit less critical, I still think that it helps the cause of all the teachers out there opposed to the kind of education reform championed by people like Kevin Huffman.  Though actions do speak louder than words, words are pretty important in their own right.

TFA’s words over the year, particularly the ones that were lies, have fueled many politician’s war against teachers.  Whether it was a fake miracle school that TFA wanted to take credit for since it was founded by a TFA alum or some ‘research’ proving that TFA teachers were more effective than non-TFA teachers since this was useful in their fundraising efforts — Many of TFA’s words have done a lot of damage over the years.  If this latest ‘What’s New at TFA?’ event is typical of the more careful choice of words from TFA, then I think it’s a step in the right direction.