The reformy-minded campaign finance machine is becoming a fact of American political life. Michelle Rhee's political giving around the country has been well-documented, as have the lobbying efforts of members of the educational-industrial complex such as K12, Inc and Jeb's Bush's FEE.

What I don't think we've really determined, as of yet, is just how well-coordinated and far-reaching this reformy intrusion into politics is. Case in point: through sheer coincidence, a reader set me on a trail of a series of coordinated campaign donations that is simply astonishing in its breadth and depth.

Let's start with a post of mine from this past November, when I reported about the absurd amount of money coming into the Perth Amboy school board race. This small city in New Jersey has a history of political corruption, but school board races had never attracted much attention from outside the state until this past year:

One slate of Perth Amboy school board candidates has raised more than $44,500, much of it from founders and supporters of charter schools, some from out-of-state, an opposing slate charged Monday.

"That's an obscene amount of money," said Jeanette Gonzalez, who is running with three other candidates under the banner "New Vision, New Voice."

Four candidates running under the name "Better Schools Now" released a state election financing report that showed they have raised $44,500 in campaigns funds as of Oct. 9.

Gonzalez and her running mates, Nina Perkins-Nieves, Benjamin Salerno and Maria Garcia, have raised about $5,000, according to their report. Gonzalez said her husband previously served four terms on the school board and never raised large sums for his campaigns. She said school board campaigns often raise $5,000 to $8,000.

Regular readers here know that I call Perth Amboy "The Reformiest District In New Jersey!"™ so I was intrigued. After digging into NJ election records, here's what I found: it turns out the total was actually $64,700, and many of the contributors were wealthy Californians with ties to the charter school industry:

- Greg Penner, Atherton CA; $8,000 donation. Penner is the Founder of Madrone Capital Partners and a well-known conservative activist. Married to Walton fortune heiress Carrie Walton Penner, Greg Penner sits on the boards of Teach For America and The Charter School Growth Fund. CSGF invests in charter management organizations around the country, including the KIPP network and Nobel charter schools. As I've written previously, both KIPP and Nobel have reputations for managing schools that serve substantially different student populations than their neighboring public schools.

CSGF is also an investor in Rocketship Education; see below.

- Arthur Rock, San Francisco CA; $8,000 donation. Rock is a well-known venture capitalist who also serves on the board of TFA and is an active funder of KIPP. Rock has invested in the Rocketship Education, a "hybrid" school that features extensive use of computerized instruction and, consequently, has a smaller faculty than regular public schools. Larry Miller found that Rocketship had large student attrition rates and smaller percentages of special needs students than its neighboring public schools (Rocketship responds to Miller here).

- David Goldberg, Atherton, CA; $8,000 donation. Goldberg is CEO of SurveyMonkey; his wife is Sheryl Sandberg, COO of Facebook. Both are partners, along with Rock, in Rocketship Education.

- Kent Thiry, Cherry Hills, CO; $10,400 donation. Thiry is CEO of DaVita, a dialysis provider; he was previously a consultant for Bain Capital. DaVita has been the subject of several federal investigations (in fairness, the company was recently cleared in one). Thiry has been interested in Colorado's schools and education policy for some time. He donated $33,000 to a slate of "reform" candidates in Denver school board elections last year, who were also endorsed by Democrats for Education Reform and Jonah Edelman's Stand For Children.

- Lydia Callaghan, Palo Alto, CA; $8,000 donation. Callaghan is the wife of Adam Weiss, a principal at Scout Capital Management. Weiss has been introduced at investor conferences by Whitney Tilson, founder of Democrats For Education Reform, a group well-known for supporting charter school expansion.

Alan Fournier is one of the co-founders of Better Education For Kids (B4K), the NJ lobbying group that has set itself up as the nemesis of the NJEA. You'll remember that B4K paid for Superintendent Caffrey's public relations campaign against the board. It's also worth pointing out that B4K has "partnered" with StudentsFirst, which reportedly received large donations from Rupert Murdoch. Murdoch's education firm, Wireless Generation, built the software engine that runs the School Of One program. SO1's successor has been seeking a$575,000 contract with Perth Amboy's schools.

After I posted this, I hunted around the NJ campaign records a little... but the thought of looking at school board financing reports for over 600 districts was a bit more than I could bear. So I dropped the matter...

Until a commenter at Diane Ravitch's blog left me a message:

Jersey Jazzman, I hope you read this column! I need some advice!

My D-Oregon State legislator (since 2005), Tobias Read, is seasoned in corporations and finance, having worked for Nike (his wife still works for them) for years. He had been groomed in the Clinton administration, when he worked with Sheryl Sandberg for Treasury Secretary Larry Summers. (Sandberg is now COO of facebook.)

It has been puzzling to me that Rep. Read has no known work as he is just paid $21,936/year during legislative sessions ($123/day per diem tied to the federal rate.)http://ballotpedia.org/wiki/index.php/Oregon_State_Legislature#Salaries

When I saw large sums of out-of-state Silicon Valley contributions to his coffers ( ~$34K of the $230,000 raised as a shoo-in incumbent las year: see below), I was puzzled. http://tinyurl.com/d2mxay7

Then I saw this link from jersey jazzman. “How To Buy a School Board Race 3000 Miles Away” and it blew my mind because the cast of characters was similar.

The commenter's URL leads to a report from the Oregon Elections Division's contribution database. Sure enough:

His other Silicon Valley friends have eyes on the education prize:

Let's stop and put this into perspective: an Oregon state representative and a slate of candidates for the Perth Amboy, NJ school board have managed to attract campaign contributions from the same group of wealthy education "reformers" who live out-of-state. Does anyone find this odd?

On a hunch, I started inputting the names above into some state-level campaign finance databases. The results:

- Colorado: According to election records, Rock, Penner, Callaghan, the Goldberg-Sandbergs, and the Fourniers gave a total of $19,830 dollars to a slate of candidates consisting of State Senators Linda Newell, Mary Hodge, and Andy Kerr; Representatives Pete Lee, Millie Hamner, Brittany Pettersen, and Dave Young; and House candidate Chuck Rodosevich, who lost his bid. While each if the candidates got different amounts all donors individually gave the same amount to each candidate.

- Nevada: According to election records, Alison Serafin, who was recently elected to the Nevada State Board of Education, received the following amounts:

(Serafin, as I reported earlier, is yet another TFA alum who puffed up her resume by claiming great success as a teacher without mentioning that she only ever taught at schools that had selective admissions or high rates of attrition.)

This means over 64% of Commissioner Hannon’s $67,438.00 came from those who do not live in Indy or Indiana, and most
importantly, do not live in the IPS district or send their children to IPS.

Does anyone believe for one second that this same group of reformy folks just happened to find all of these obscure state- and local-level races at the same time?

The giving of these wealthy "reformers" has obviously been coordinated. Someone is targeting low-level races as a way of recruiting and developing political talent - talent amenable to the expansion of corporate influence in education.

Which begs the question: who? Who coordinated over $162,000 worth of giving by corporate education reformers - and that's only what I've been able to find so far!

Were I an enterprising investigative reporter, that's what I'd be trying to find out right now... 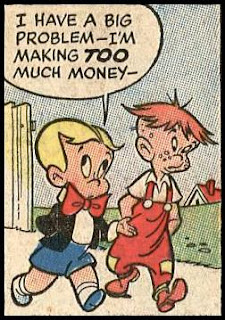 So I need to find someone to help me give it away to low-level politicians!