The Art of Teaching Science: Why High-Stakes Tests Should Not Be Used to Measure Student or School Performance

In my earlier post, I urged Atlanta’s new superintendent to explain to the Atlanta community why using high-stakes achievement measures, such as increasing achievement scores while raising the bar, should not be used to measure school performance.

For decades now, we have used high-stakes achievement tests as measures of success in school.

After the Soviet Union launched Sputnik, the world’s first satellite, the U.S. went into a state of frenzy and assumed its educational system was inferior to the USSR, and thus began a long chapter of  blaming schools for technological, scientific and economic problems.  The sky began to fall and all forms of reform began invading American classrooms.

But with the passage of the No Child Left Behind Act in 2001, the nation’s schools are strapped into a place that offers little flexibility to administrators or teachers.  NCLB mandated high-stakes testing for all students starting with six-year-old first-graders.  With an increasing battery of tests now in operation in schools, the curriculum has narrowed to such an extent that parents see schools as a place where kids go to prepare for  tests.  The state of Georgia spends about $25 million on testing each year, while the nation spends more than $1.7 billion.

However, since 1971, the National Assessment of Educational Progress (NAEP) has tested American students in reading, mathematics, and science.  Rather than discovering that American education is failing, the results over the last 40 years show progress in reading, mathematics and science.  For example, Figure 1 shows average mathematics scores of 9-year-old students on the NAEP Long-Term Trend Assessments results by year on a scale in which the highest score is 500.   As you can see, students average scores have increased during this period; they have increased from 219 in 1973 to 240 in 2012.   Results for reading and science show the same trend scores increasing over time.

Performance Levels are Up

Figure 2 shows performance  levels for 9-year-olds on the mathematics NAEP test.  If you focus on just the green, or Level 250, you will see that students scoring at the this level or above has increased from 3% in 1978 to 26% in 2012.  All results, except for 2008 are significant improvements from 2012.

However, the cut off levels used are opinions of experts.  Using 50 point increments is not based on science.  It is a qualitative measure, based on expert opinion. In fact if you read the descriptions of the levels (descriptions are specific for math, reading and science), you will see that they are qualitative descriptions or performances students are expected to be able to do.

The Global Education Reform Movement leaders, however, use these performance levels to harp on teachers, and make the claim that we aren’t doing the job.  All of our students are not performing at the advanced level.  As Diane Ravitch says in her book, The Reign of Error, “only in the dreams of policy makers and legislators is there a world where all students reach “proficiency” and score an A.” 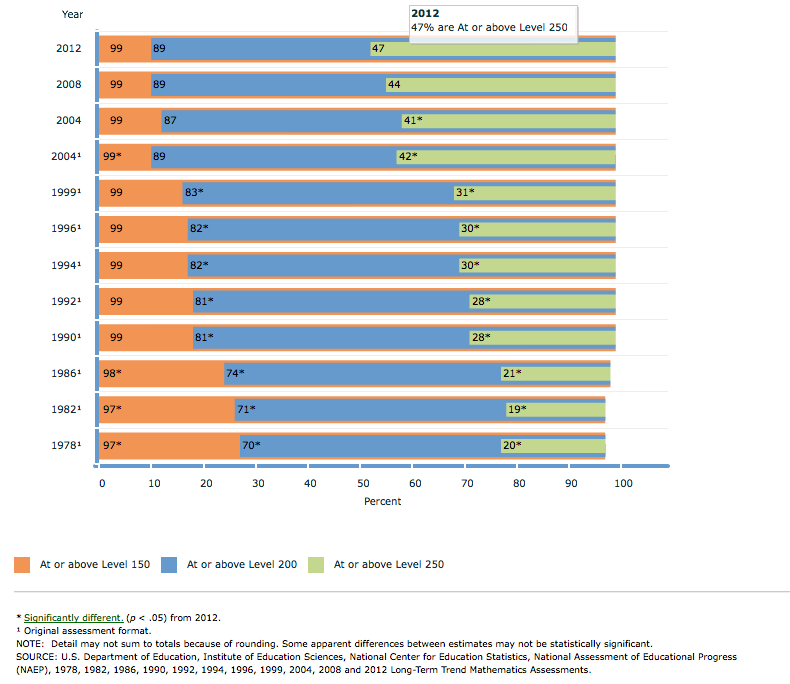 If you look at the NAEP data (Figures 1 & 2), you will note that American teachers and their students have made progress in all the areas of testing (reading, mathematics and science).  Diane Ravitch summarizes it as follows:

NAEP data show beyond question that test scores in reading and math have improved for almost every group of students over the past two decades: slowly and steadily in the case of reading, dramatically in the case of mathematics. Students know more and can do more in these two basic skills subjects now than they could twenty or forty years ago.  Ravitch, Diane (2013-09-17). Reign of Error: The Hoax of the Privatization Movement and the Danger to America’s Public Schools (Kindle Locations 1155-1158). Knopf Doubleday Publishing Group. Kindle Edition.

NAEP Long Term Trend data has shown that American education is not broken, and that schools are making progress with all students.

What is the Purpose of Testing

In Georgia, the purpose of high-stakes tests, is to “measure” how well students acquire the skill and knowledge described in the state mandated content standards in reading, English/language arts, mathematics, science and social studies.  According to the state these assessments yield information on academic achievement at the student, class, school, system and state levels.

But then the state claims that the information is used to diagnose individual student strengths and weaknesses as related to the state standards, and gauge the quality of education throughout Georgia.

For example, this week in DeKalb County School District, more than 40,000 students will be preparing for the Criterion Referenced Competency Test (CRCT) which will be given the week of April 21 – 25.  While talking to one parent from DeKalb today, she said that her three children, ages 8, 10 and 13 have been working with worksheets to prepare for next week’s CRCTs.  In Atlanta Public Schools, elementary and middle school students will take the CRCT April 16 – 24, while high school students will take their tests April 29 – May 12.

So, for the most part all Georgia students will be involved in state testing from now until May 12, or for about four weeks.

So for four weeks, the state gives these tests to students, and according to the state, to diagnose our students.  This is an outright oversight or lie.  The results are not known until the summer.  Students have gone home.  Teachers are in graduate schools.  The results have little to nothing to do with helping student learn.  In fact, the evidence is that these high-stakes tests increase drop-out rates and decreased achievement (Berliner and Glass, 2014, p. 220-221).

There is little Reason to Use High-Stakes Tests

High-stakes testing have nothing to do with improving student achievement, or improving the quality of school learning.  Please note, that I am not saying that testing, or evaluation has nothing to do with learning.  Formative and diagnostic assessments have been shown to improve student learning, but summative, end-of-year, high-stakes assessments do not improve learning, and only assess a narrow range of student learning.

It’s a myth that American public education is failing, and the research done by the NAEP is clear and conclusive.

There is no reason to use high-stakes tests to make decisions about student, teacher and school performance.  Using a single test to claim that it determines student learning in a course or subject area makes little sense.  The skills that are measured on these tests are not necessarily the skills that are important for job or college success.

This week, in Marietta, Georgia, a couple has refused to allow their two children enrolled in West Side Elementary to take Georgia’s high-stakes tests, the CRCT.  After informing the school principal of their decision, they were met by the Marietta Police the next time they brought their children to school.  The police officer told them they would be trespassing and that their children were not allowed on school property.  According to a report in the Marietta Journal, the school district has not made a decision.

The school system superintendent thinks that parents need to be educated as to the reason these tests are given.  If the superintendent would listen to Mary Finney, the parent refusing to let her children take the tests, she would soon realize that this parent already knows why the CRCT’s are given, and simply doesn’t agree with the rationale.  As Ms. Finney said, there is no way that a single test will measure what her children know.

Let’s hope that the school district works with this family to resolve the issue, and does not use some form of punishment on the family and the children.

This family in Marietta, which is where I live has support from many parents, teachers and administrators.  In Florida comes this report:

Kelsey Lewis, joined with teachers, parents and school officials Thursday afternoon at a news conference to urge people to reach out to legislators and end high-stakes testing like the Florida Comprehensive Assessment Test.

“The testing mania has created a burden on our ability to teach our children with little to no educational value. It has achieved nothing academically, but successfully created a pressure-packed atmosphere on our children, their parents and our educational professionals,” said Mark Castellano, president of the Teachers Association of Lee County.

The  Finney family is courageous.  Will the Marietta superintendent and John Barge, Georgia’s Superintendent of Education act courageously and support these parents?  We’ll be watching.