Yong Zhao: From “Yes, but” to “Yes, and…:” Reimagine Possibilities and Obstacles of Educational Change 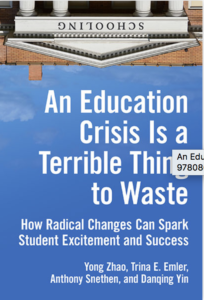 My encounters in recent weeks’ discussions (virtual meetings, social media interactions, and discussions on our new show #silverliningforlearning) once again focused my attention on a common phenomenon in education. Almost everyone thinks education should change and everyone seems to agree with the general directions of change (While the specifics of the desired change vary, the fundamentals are very similar—personalization, student agency/voice/self-determination, less testing, more authentic learning experiences, and attention to the whole child and cultivate different set of skills and competencies.) Moreover, there are many wonderfully successful examples of the education we aspire to have. Numerous teachers, school leaders, and even students have taken actions to translate their aspirations into realities. Although the totality of the traditional education establishment seems to be intact, there is abundant evidence to show that changes can happen. However, I still meet with many people with the “yes, but” mindset.

The “yes” is an endorsement of the merit and need of the proposed change, a nod to the possibility of change. The “but” lays out reasons for why the change cannot or should not be enacted in their own contexts. It is a list of factors that make their contexts different from others. The specific reasons can be expressed in different ways but generally reflect a concern over potential failure and negative consequences of the change, a lack of conditions that enable the change, and possible oppositions to the change. The reasons can be perceived or actual. Either way, they can be very convincing since no change, especially the more radical changes, can be guaranteed to be successful, positive, and easy to implement. Otherwise, the change would perhaps not be needed. As a result, the “buts” become powerful arguments and convenient rationalization for inaction.

To make the changes we desire, we need to replace the “yes, but” mindset with the “yes, and” mindset. The latter treats the “buts” as challenges to address rather than insurmountable obstacles. When we take actions to confront the “buts,” a few things could happen.

Some of the problems that overwhelm us may just disappear

A common “but” is the genuine concern that we are so overwhelmed with current problems, such as coping with the Covid pandemic, that we do not have time, energy, or resources to think about innovations. But innovation may just make the problems go away. When automobiles replaced horse wagons, the public health hazard posed by horses went away, so did all the problems associated with keeping cities clean from dead horses and horse waste. Of course, new problems will appear but you are then solving problems of a new paradigm.

The standards are not as restrictive as we thought

Another common “but” is the belief that government curriculum standards, accountability standardized testing, and college admissions requirements pose a tight control of what schools and teachers can do. Indeed they are, but there are workarounds and actually room (albeit limited) for innovations, as many educators and schools have found.

There is less resistance than we thought

One often cited “but” that stops innovation is the perceived enormity or active resistance from others—parents, students, colleagues, leaders etc. and it does indeed exist, but the scale and power of such resistance can be exaggerated in our mind. I have found a quite interesting phenomenon throughout the years: mutual perception of resistance or anti-change. That is, one group often points to others as the source of resistance or unwillingness to change. School leaders ask what to do to get teachers to innovate and teachers ask about how to make leaders to be open to change. Teachers and school leaders worry that parents want to perpetuate the tradition and fight against changes and parents complain schools are too traditional. The same happens between students and educators as well as policy makers and education practitioners. I am sure that given the large numbers of teachers, school leaders, parents, students, and policy makers as well as the variations of contexts, variation in attitude toward changes (and what kind of changes) is large. But there are always people in every group who desire change. They may not be vocal advocates for change, but they can be sympathetic and supportive.

Change may not require more effort or resources

Change can be hard but does not necessarily require more effort and extra resources. Teachers work very hard. But for some, their hard work does not pay off in terms of student learning and job satisfaction. Changes that bring better student learning and make teaching more satisfying do not require them to put in more time or energy. At the school level, smart changes not only do not require extra resources, they could save costs.

To collect evidence that we do not have to be constrained by the “yes but” mindset, I worked with a group of colleagues to collect stories of students, teachers, and school leaders who have made radical changes. We report these stories in the book An Education Crisis is a Terrible Thing to Waste: How Radical Changes Can Spark Student Excitement and Success (Teachers College Press, 2019). Below is an excerpt from the introduction of the book:

This book is a collection of stories of educators who have responded to the need for change with “yes” without being immobilized by the “buts.” Like everyone in education, these ordinary educators have faced the same “buts” but decided to take action anyway. It is not so much that they did not consider the potential for failure or repercussions, nor were they freed from constraints, oppositions, or resistance. Rather, they confronted the unfavorable conditions and directed efforts to address them. The “buts” become problems to be solved rather than excuses for inaction. How they confronted and addressed their unfavorable conditions and pushed their practices forward provides great insights for moving beyond the “yes, but” mindset.

The stories here have been carefully selected and thoughtfully examined. To begin with, the educators we examined in this book have all embarked on a specific line of innovation—efforts to break away from the traditional one-size-fits-all education that overemphasizes standardization, standardized testing, and acquisition of knowledge. The innovative efforts these educators have engaged in all aim to make education more child-centered (vs. curriculum centered), more authentic and product-oriented (vs. standards and test oriented), and more globally connected (vs. confined to a classroom). These efforts are the needed changes in education in order to prepare children for a world that needs more innovative, creative, entrepreneurial, and globally competent individuals. Thus, as one can imagine, their efforts are in direct opposition with the heavy tradition of Industrial Age education and recent government policies for standardization, standardized testing, and knowledge acquisition.

The cases of education innovations included in this book were also selected to represent the various “buts” commonly used to reject innovations. Each story illustrates how educators confronted and addressed a largely unfavorable condition or perceived impossibility. The fear of losing existing success is a common reason cited by many already successful schools for not engaging in changes, but we have found schools that have been traditionally successful engage in radical changes. The lack of resources has also been a common reason used for not engaging in innovations, but we have found “broken” schools to take bold actions. Similarly, traditional constraints such as standardized curriculum, standardized testing, and college admissions have often been listed as reasons for limiting autonomy needed for innovations, but we have discovered educators who have done amazing things regardless of these constraints.